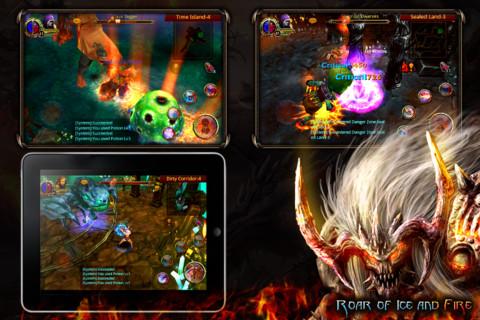 Well, at least it isn’t cribbing ideas from other games this time around.

Say this for Armed Heroes (formerly known as Armed Heroes Online): It’s not misleading you at all with its title. This freemium fantasy action MMORPG does contain heroes, and they are in fact armed. Chinese developer EGLS didn’t provide it with a whole lot of originality, but it’s a competent way to do some questing with or without other people helping you on your iOS device of choice.

You may recall Armed Heroes getting into a bit of a flap with Runic Games over the summer after the Torchlight creators accused the game of borrowing (read: wholesale copying) some elements from Torchlight II. EGLS never officially admitted any wrongdoing, but the game was removed from the App Store for a few months, returning in October.

In any case, the end result doesn’t really look or play like the game that supposedly “inspired” it; what we got instead is a pretty standard set-up for a fantasy RPG. After creating an account and picking a server, you’re prompted to pick from one of four fairly self-explanatory character classes: Warrior, Archer, Wizard and Necromancer. I went with the Archer for this review, this being the “Year of the Bow” in pop culture and all. Don’t expect much in the way of character customization right off the bat, not even for the gender of your toon.

Gameplay largely revolves around visiting NPCs to receive quests, most of which send you into nearby dungeons to clear out monsters and/or retrieve items. The quest-givers have distinctive personalities, including one who controls a portal who tells you to get lost the first time you talk to him. Unfortunately, the story gets lost in the failed translation, as in this sample line of dialogue: “People were running around with scare.” On the plus side, there’s an option to auto-run directly to the next person you need to talk to in your quest chain, which definitely saves you some hassle in the game’s towns.

The dungeons are rendered in 3D fashion, with scenery that’s nice to look at except when it’s getting between you and your character. That doesn’t happen too often since the levels are laid out in pretty straightforward fashion and the mini-map is effective at showing you around. Advancing to the next level of each dungeon requires you to clear out all of the monsters on your current level, including the occasional oversized boss. This being an MMO, you can group with other players if desired, something that becomes an absolute necessity on the higher difficulty levels: Nightmare, Hell and Inferno, in that order.

Moving characters is pretty easy thanks to a virtual thumbstick, and they target the closest enemy in the direction they’re facing. A large button in the lower-right corner is for basic attacks, with four smaller buttons nearby that can be mapped to special abilities. Those deplete your magic meter, which sits next to your health in upper-left corner. Both magic and health can be refilled using potions that you can score for free by talking to a specific NPC.

Rewards from slain foes include gold and gear, and you’ll get experience points and more gold for turning in quests. Items unusable by your class can be sold at the Auction House, the only way you can obtain Diamonds, the game’s premium currency, without buying them. For some reason, there’s also a star system for completing dungeons that is based on how long it takes you and how many times you die. This would be fine except that advancing to certain levels takes a set number of stars on top of the XP requirement. When you do advance, you can choose from a nice selection of passive and active skills to improve. 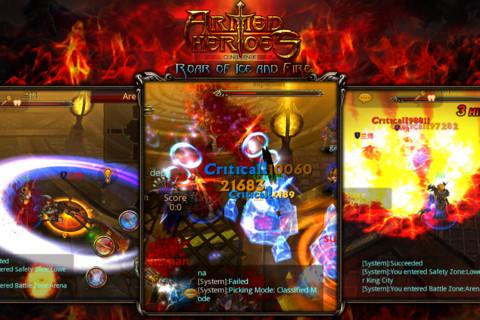 The other frustration you’ll encounter is that some quests need a quantity of special items from specific dungeons to complete. If you need, say, five gobs of monster saliva, you may only find two while clearing that dungeon. Yes, that means you’ll have to go back and do it two more times – and then the next NPC may ask you to find more items from that same dungeon. This is pretty inane, even by the grinding standards of Eastern MMOs. Add in the fact that there is a Stamina resource that limits the number of dungeons you can enter in a day and it all gets kind of silly. But hey, at least you can go fight the “Gaint Gel” again.

There’s an impressive number of features lurking in the game – guilds, crafting and a PvP mode that unlocks at Level 21 – but whether you’ll stick with it long enough to discover it all depends on your threshold for assorted goofiness.

It’s pretty clear that regardless of whatever happened a few months ago, Armed Heroes went on to become its own game. It’s an aggressively average game, but at least that’s better than some of the alternatives.