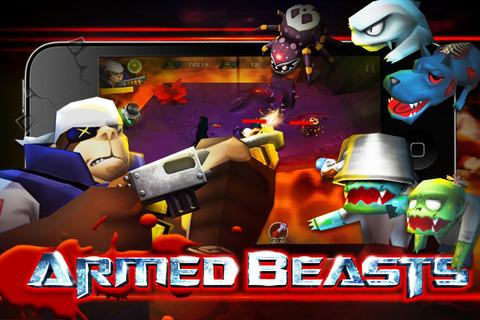 How do you get out of hairy situations? Fuzzy animals with guns.

While debates may rage about where humans came from, there is little question that animals go through forms of evolution. These types of changes often occur to adapt to a given environment and increase the likelihood of survival. This is clearly the case in Armed Beasts. Animals that often experience attacks from predators and those higher on the food chain have evolved to have extremely accurate aim with ranged weaponry. And while animals that stand upright and attack with things like shotguns and uzis may seem absurd, but I’ll be folding up my tinfoil hat and stockpiling canned goods.

The plot of Armed Beasts does not pit the animal kingdom against humanity in a fight for superiority. Instead, it capitalizes on another craze of pop culture–zombies. This may finally provide an answer to the long-asked question, “Do animals become infected with the zombie virus the same way humans do?” No, and apparently that may be our best hope for survival. Start training your house cat how to hold a handgun.

While we know these animals are capable enough to fight with firearms and fend off the undead arrival, you’ll have to help them out a little bit. And I do mean a little bit. In fact, you really just have to arm these beasts–I think we’ve figured out where the name comes from–and move them around. The game is set to auto-fire at all times and your animal will blast baddies at will, no command needed. Controls can either be set to virtual joystick, or “tap to move.” Both are fairly effective, though I vastly preferred the joystick for sake of escaping sticky situations.

While the in-game experience is dedicated to moving around and blasting zombies to acquire currency, the rest of the game is spent in menus to equip your favorite fauna. Once your character unloads enough rounds to make it through a level, you’ll take the cash to the shop to unlock weapons and characters. This is probably the most interesting part of the game because, as previously mentioned, you won’t be the one in charge of firing the weaponry. Managing your arsenal and hearing your character firing the gun you chose is the closest you’ll get to a reward in the low scale battles. Of course, in-app purchases will allow you to cut out the grinding required to earn this gear, but that makes the entire experience underwhelming and disconnected from your actual actions. 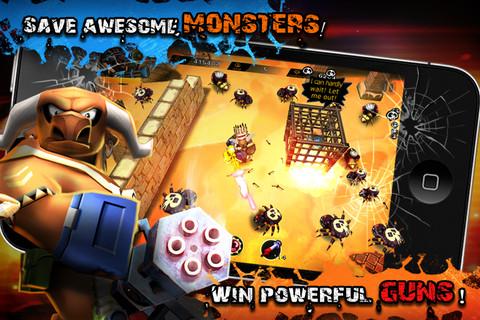 The game hits its stride with the bigger boss-like battles. Huge enemies will approach you, taking up a third or so of the screen and forcing you to really move. Bringing them down requires quick reflexes and clever weapon choices. Oddly, these are the only places the auto-shooting feels truly necessary, raising the question as to why this was not a dual stick shooter. You might find yourself reliving those fights multiple times to gain some more coin, though, and the excitement doesn’t quite shine as much upon a second playthrough–especially when the only encouragement is the grinding need for more currency.

Graphically, Armed Beasts isn’t quite as attractive as other titles in the genre. It feels a little dated, which is somewhat painful to type considering “dated” in mobile games is a matter of only a year or so. The game’s quick pace doesn’t cause any choppiness, but that’s partly the point; it’s not visually impressive enough to run into any sort of graphical overload. The sound, more or less, is what you’d expect–simple background music with roaring gunshots overtop. 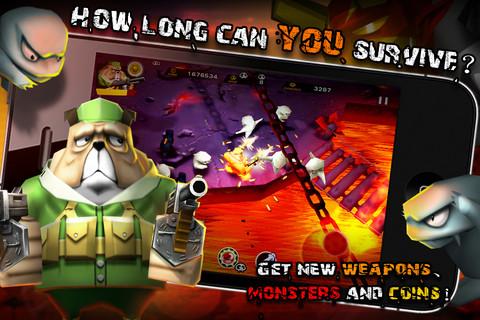 “What you’d expect.” That’s the key phrase here. Pretty much everything about Armed Beasts feels middle of the road. The fights would be exciting if the player actually had a hands on influence, but the auto-fire takes you out of the experience a bit. The game still requires the standard amount of grinding, so when you finally do get that elusive “epic battle” feel, you’ll have to replay it until it loses it’s allure. For a game that seemed to be based on the evolution of animals, the game doesn’t really innovate anywhere. It’s the status quo in its natural state.