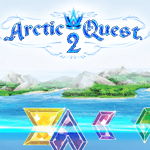 Even though the Snow King was defeated at the end of the first Arctic Quest, his son is back to finish the job in Arctic Quest 2, the sequel to the popular puzzle game. So once again, the Earth is in danger of being turned into a frozen wasteland with all living creatures encased in ice unless you can travel to the Snow Prince’s lair to break the spell.

Standing between you and the Prince are 100 brand new puzzles (40 more than the first game), which represent trapped plants and animals that need to be brought back to life. You’ll be presented with an outline of the creature that you’ll need to fill in using tthe ice crystals that fall from the sky.

These crystals come in various geometric shapes, from tiny triangles and diamonds to more complex configurations that are trickier to find space for. You’ll win the level when the shape is completely filled in, and score bonus points if you manage to "chain" three or more of the same ice crystal together so that they’re touching.

Unused ice pieces fall into the water below, and if the water becomes clogged with ice, you lose the round. Thankfully there’s a small bonfire on shore to burn off extra pieces that aren’t needed; however, the fire takes a few seconds to recharge after each use.

There’s also the occasional bonus level where you have to complete a shape within a certain time-limit or to achieve a high score using ice crystals that scroll across the screen instead of dropping from above.

Certain ice crystals contain trapped animals. If you free them by using the ice crystal (instead of letting it fall or tossing it into the fire), they grant special power-up abilities that can help you. The snail, for example, slows down the speed at which the ice crystals fall, the pufferfish squirts water to fill in an empty space, and the crab smashes floating ice pieces into small triangles. My personal fave, the piranha, cruises through the water devouring any unused ice pieces that get in its way. You can also purchase power-ups using pearls that are earned throughout the game.

In addition to power-ups, there are also a handful of special ice crystals that behave a little differently. For example, when two water element crystals are placed inside the shape, all the empty space in between them will be filled in automatically. On the other hand, anything that happens to be between two fire element crystals will get destroyed. There are also rainbow crystals that will form a chain with any other type of crystal, as well as shape-shifting crystals that constantly mutate until they’re used, which allows you to wait for the shape that you need the most.

As if all this wasn’t enough to think about, the sky is also home to birds that fly back and forth and can be clicked on for extra points, and in later levels, the Prince will send angry storm clouds rolling in to zap away at the shape with lightning, destroying your work – you’ll have to neutralize these clouds by clicking on them.

At the same time, Arctic Quest 2 is quite an interesting game visually. While the graphics themselves are so-so, the shapes (which encompass everything from grasshoppers and chameleons to snowflakes, sharks and seals) have a certain mathematical beauty about them. Some of the best levels are those where the shape is not all revealed right away. For example, a snowflake might start off as a small hexagon in the centre and then gradually expand into a complex and beautiful shape the more of it you fill in. Another favourite is a caterpillar that when filled suddenly unfurls its wings to reveal a majestic butterfly.

Progress is recorded on a map, and as you clear each region you’ll see the frigid tundra transform into lush, tropical islands filled with beaches and greenery.

There’s not a lot to complain about in Arctic Quest 2. The story could have been stronger, and the limited dialogue boxes often repeat themselves. (I lost count of how many times the Prince told me it was my "last time to surrender.") Although it’s not an original concept and it piggybacks the original in terms of graphics, story and gameplay, the levels themselves – the meat of the game – are different. What’s more, when you’ve completed the game, your high score will be updated online so that you can compare your performance with players around the world on daily and overall leaderboards.

As you can imagine, things can get pretty hectic in Arctic Quest 2. You’ll need fairly quick reflexes to do well at the game, so players who like their puzzle games to be laced with a bit of adrenaline will find that there’s a lot to like here.