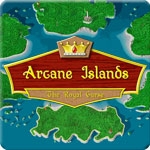 Here at Gamezebo, we always applaud the efforts of developers in the casual entertainment space to try something new and innovative.

However, something does have to be said for the high-quality presentation and marketing assets that come along with big-budget productions by more storied software creators. As the outing’s relatively low-fi, garage-style aesthetic and unpolished interface just go to show, sometimes, there are benefits to be recognized from putting as much, if not more, effort into gloss as actual gameplay.

But let’s not get ahead ourselves – there’s plenty of intriguing content to be found within this magically delicious medieval outing, featuring dozens of fanciful levels spread throughout a peaceful kingdom known as Nerantan. For example, the storyline itself, which surrounds a lone, lovestruck stableboy’s quest to break the curse that holds the king’s daughter Lunetta in an iron grip. His mission: Following a storybook tale, seek out the wizards who inhabit a series of enchanted isles in hopes that they can break the pesky hex.

The basic game mechanic around which the entire fantasy-themed adventure revolves: Turning individual or multiple tiles so as to create sequences of icons which match several predefined patterns available on each level. Starting out on a stone table, divided into grids of squares branded with varying icons such as roses, wheels, four-leaf clovers, butterflies, shells and ivy leaves, you’ll simply turn each tile until you’ve arranged a few in a series that matches those depicted around the perimeter of the screen. Each tile you turn (and several can be swung on-command) costs a certain number of coins, with more coins added to your pile every time a match is made. Fail to finish any of Story Mode’s 80-odd scenarios before your supply of coins runs out, and you’ll have to restart the stage.

The trouble is, while highly strategic, play progresses at an interminably slow crawl. (A problem enunciated by the sheer number of matches you’ll have to make to come out ahead on each stage). At odds with other digital diversions in the same category, options to redo unwanted moves, earn exciting power-ups and create cool effects are in short supply as well. Nor, for that matter, will anyone be blown away by the title’s workmanlike, but admittedly shareware-grade interface and aesthetic.

Even so, you’ll find the base principles upon which the title is founded make for a highly cerebral way to kill a few minutes here and there. Frankly, between the aforementioned trio of individual modes (in addition to the main campaign, also see Bingo, based on finding matching cards as quickly as possible and Fill Up, hinging on filling icon-based counters) and a surprisingly high general challenge level, there’s a lot of entertainment value here. From the get-go, you won’t be afforded many options to make mistakes. And while frequent restarts will inevitably lead to frustration, the title’s got that "just one more try" quality about it that’ll keep you plugging away incessantly at it nonetheless.

To wit, while a nice change from the norm on a conceptual level, it should be fairly obvious: Arcane Islands isn’t going to blow discerning audiences away in terms of either sheer amusement potential or overall production values. By the same token though, you shouldn’t just dismiss it out of hand, especially as many will surely be wont to do based solely on its functional, but hardly high-quality audiovisuals. It just goes to show you can’t always judge a book by its cover – or an unexpectedly compelling outing by the fact it deserves better treatment in the sound and graphics departments.