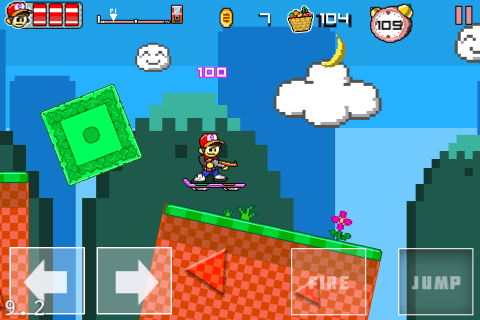 Arcade Jumper is all about Eddy and his brother, who unfortunately got himself kidnapped and sucked into an arcade cabinet. With NES Zapper in hand, Eddy heads in after him and we guide him through a bunch of old school platforming as he jumps from cabinet to cabinet looking to take down the baddies that took your little bro.

Since it’s a sidescroller, the controls are pretty basic. You have a virtual joystick that you can use to move left or right, and buttons for jumping and shooting. You can kill enemies by jumping on them or shooting them. You’ll move through levels usually in search of warp coins that you bring back to the beginning of the level to warp out.

In an interesting twist, the iPad version makes it looks as though you’re playing the game in an actual arcade cabinet.The cabinet look is pretty awesome, but luckily they kind of scrap it for the iPhone version. The joystick and buttons are replaced by see through buttons that float over the action instead of being set under it. It’s a smart decision, since it gives more of the smaller screen over to gameplay instead of just the “look.” Good move.

You can collect tickets in the game which carry over for each playthrough, which you can use to buy new characters and a few power ups. In addition to earning them in-game, you can also do it in a few mini-games as well. There’s skeeball, a pachinko type game, and a whack-a-mole one. These play fine, but are ultimately nothing special.

Here’s the rub: Arcade Jumper offers no checkpoints or save files, and a single death will force you back to the very start of a level. It’s a tall order to ask people to play through the beginning of a game over and over and over ad naseum. It gets a little harder when it’s the later levels that are really interesting, but it’s the boring initial levels you’ll be playing on repeat. 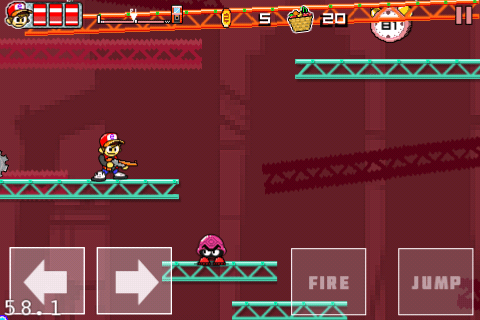 The only way to continue requires getting 25,000 points, which takes you over a third of the game to rack up. So while there is a safety net at some point, there’s no checkpoints or way to start later in the game. Every time you fail you need to go all the way back. On a side note, it’s worth telling you iPhone users out there Arcade Jumper cannot multitask. So dropping out of a game to take a call or check messages will mean you’re starting over.

This ruins what otherwise would’ve been a fun little platformer. I really like the run right to grab or fight something, then head back to the start of the level to warp elsewhere. I like the retro-ish graphics and nods to the old school games like River City Ransom and Super Mario Bros. Arcade cabinets and NES Zappers included. But, for me, the experience is ruined by the starting over thing. I just got tired of playing the first few levels over. And over.