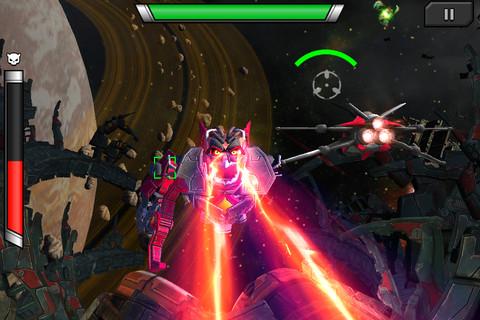 Any game with strong similarities to Star Fox deserves a playthrough, in my mind.  The ahead-of-its-time polygonal space shooter set precedence for smooth flying controls and engaging action upon its arrival in 1993.  Although Psyonix’s recent Arc Squadron is obviously inspired by the SNES shooter, it is also its own game, perfectly crafted for the iPhone and the challenge of battling through space with only your fingertip.

Arc Squadron drops you into the cockpit of a galactic fighter just as an attack from the mechanical “Guardian Forces” has begun.  Unlike Star Fox‘s team effort gameplay (“team” stated loosely; Slippy is useless), you are a lone pilot, concerned only with your ship’s status and destroying every enemy you come across.  You will have guidance and advice sent to you via transmissions from the squadron commander (excellently voiced by a burly J.K. Simmons impersonator) and Eve, your ship’s A.I.

Your tools in this war-on-robots are your ship’s primary gun, equipped with unlimited turret ammo; a secondary, rechargeable weapon, like missiles; and your finger’s ability to control both while maneuvering your ship.  Your fighter will follow your finger’s every movement, allowing for quick evasions with a swipe across the screen, or precision aiming by tapping and holding where you want to stay.  The primary gun auto-fires as long as your crosshairs are on a target, allowing you to concentrate on dodging incoming fire in between lining up targets.  Secondary weapons require you to tap on a target directly in order to launch.  And yes, you can do a barrel roll by quickly swiping straight across the screen, although the move is mostly used for shaking off weapon distortions imposed by a few enemy ships.

These controls are exceptionally smooth, with immediate response time from your ship and precise targeting recognition when you’re aiming at an enemy.  Secondary weapons will occasionally refuse to fire, but this issue may be a byproduct of constantly having your finger on the screen.  Arc Squadron follows an on-rails path through each level, and with no thrusters or retro-rockets, your speed is automatically determined and maintained throughout each stage.  This is, personally, preferred as you’ll be busy enough near-constantly dodging and aiming at enemy ships, picking up health refills, maneuvering around environmental hazards, and collecting orange and blue cubes.

These cubes appear throughout the stages in bunches, and if collected in order, award an escalating multiplier of “Arc Bucks.”  Arc Bucks are the in-game currency used to upgrade current or purchase new ships (with increased damage and armor ratings), buy different secondary weapons (like lasers and a reflective shield), or change the skin color of your ship (purely cosmetic).  You can, of course, exchange real money for Arc Bucks, but the game is fairly generous in doling them out on each level for both cubes and completion score.  You can also replay levels as often as you’d like, earning additional Arc Bucks each time.

Grinding through levels for additional Arc Bucks sounds like a chore, but Arc Squadron‘s amazing level design—combined with its finely-tuned gameplay, graphics, and music—incentivizes replaying again and again.  Each unique environment feels entirely different from the rest, making every stage memorable and a distinct experience.  The large, open “Asteroid Belt” stage sends you soaring around a gorgeous blue planet while enormous chunks of asteroid debris float past.  “Echo Station” throws you into close quarters, dodging closing doors and rotating fans while enemies burst out from behind cover.  One of my favorite stages, “Dark Moon,” begins in an icy cave with stalactites falling around you, then swerves outside to the exterior of a base and the underside of a giant ship.  Each environment is almost distractingly beautiful, both in the deadly foreground and the aesthetic background.

Of course, with such amazing stages to enjoy, it’s disappointing to find out Arc Squadron only actually has 21 different environments, if you include the nine boss areas (which are shorter and more repetitive, as you are only fighting one enemy there) and the wormholes (which appear every other level and are merely different-colored warp tunnel stages).  The game has 64 levels to complete, but the 21 environments are repeated through three difficulties to get to that 64; the stage remains the same, but enemies are stronger and a different color.  Even the optional challenge levels—which test skills like cube collecting, environmental maneuvers, and targeting—exist in wormhole-like stages, leaving us with only nine truly unique levels. 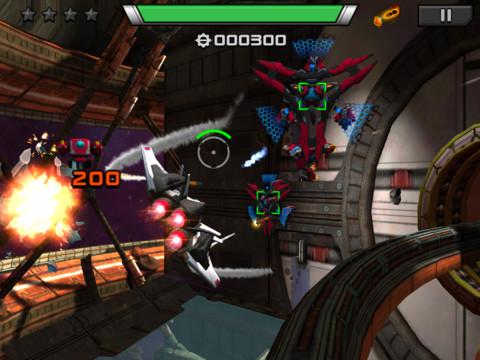 Yet, despite this, and replaying most missions at least twice, I never found myself bored with a stage.  This is partly due to the challenge system in the game, as well as its varying difficulty.  Like most level-based arcade games, Arc Squadron ranks your abilities on a four-star scale after each level.  This rank is based entirely on the score you earned while playing, including percentage of enemies killed, cubes collected, and multiplier achieved (killing enemies in quick succession results in an escalating multiplier).  However, in my repeated attempts to reach the seemingly unattainable four-stars on even one level, I learned that the multiplier is basically the one true factor in earning stars.  On the second “Frozen Shard” map, I finished with 96% of enemies killed, 100% of cubes gathered, and a x9 multiplier—and was awarded one star.  This may seem like I’m just bad at killing quickly, but weighting the multiplier so heavily is an unfair metric on many stages, where enemies simply do not spawn fast or often enough to rack up a worthwhile multiplier.

Ultimately, though, you could get zero stars on every map and still complete, as well as have a blast with, Arc Squadron.  In a pinch, it’s great for a quick Star Fox fix.  Beyond that, it’s an amazing arcade shooter that’s easy to lose yourself in.  I’m heading back in; all aircraft report.

The Wizard of Oz Review