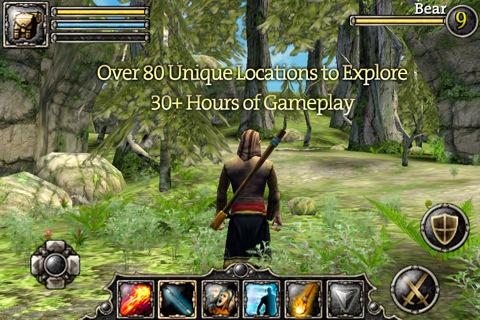 Aralon: Sword and Shadow is simultaneously huge, deep, fun, and riddled with bugs.

Aralon: Sword and Shadow is being described by many as The Elder Scrolls on the iPhone, and that’s not an inaccurate description. On one hand, this is easily the biggest game world to ever appear on the system, providing an immersive and fun play experience. On the other, the only way to actually enjoy yourself is if you can put up with the technical irritations that you’ll definitely encounter during play.

The story begins when a friend of your father arrives in your house and tells a tale of woe. It turns out your dad was a royal guard who sacrificed himself to protect the king from an evil advisor (is there ever any other kind of advisor in these sorts of stories?). Naturally, it’s up to you to figure out just what’s going on in the royal court, avenge your family’s honor, and become a hero in your own right. From this initial premise, it’s up to you to determine just what path your story will take.

As the game starts you’ll set up your character by choosing race (human, elf, or troll), gender, appearance, and character class (warrior, ranger, rogue, or mage). The initial appearance setup allows you to choose from a limited number of hairstyles and colors, as well as facial designs. From this point on your gear will affect your appearance as you swap equipment/armor out.

Aralon is a third-person action RPG. You move your character around via a virtual joystick that is becoming increasingly common with such titles, though it feels a bit small for the job. As a result it’ll probably take you a little while to get used to moving around the game world without accidentally moving your finger off the control stick and moving the game camera.

This is an incredibly deep game, with an massive fantasy world to explore at your leisure. Both combat and travel are in real time (which means that journeys, even when covered on horseback, can be long ones), and movement can be frustrating at times. Many of the environments are huge, full of respawning enemies, and there isn’t really a fast way to get through them when you’re traveling on foot.

Combat, meanwhile, is pretty straightforward -use of skills, magic, and parries keep things interesting- but the looting system is a pain. In order to get your hot little hands on some new treasure or gear, you’ll have to walk up right next to a body or chest and then deal with a needlessly-complicated screen in order to select the option to snag everything.

When it comes to production values, Aralon is a bit of a mixed bag. The graphics do a lovely job of showing off the game’s world, featuring lush environments and nice character/creature design, but there are noticeable problems with the draw distance (things will sometimes pop up out of nowhere when you draw near) and flickering textures at times, too. The music, meanwhile, is nice, but it sometimes overpowers the game’s general sound effects. 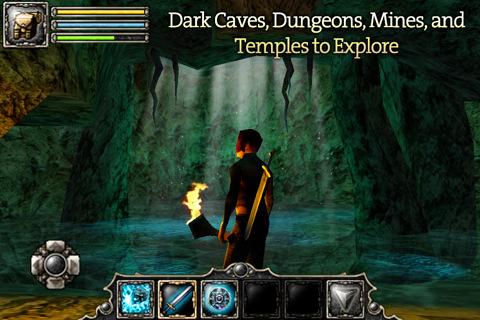 The biggest problem with Aralon is that it clearly needed to spend some more time in the QA department. Bugs are a regular occurrence during play, some minor (like text staying on the screen long after it should have disappeared) and some pretty major (like the game crashing at random). You should make a point of saving often and regularly, and not trusting the autosave, because some of the worst bugs will pop up right after leaving from one area and another one is loaded.

Crescent Moon Games has let us know that an update has already been submitted that will address many of Aralon‘s launch problems, so at the very least, gamers can feel confident in knowing that the team is working on these launch window woes.

As it stands, Aralon: Sword and Shadow is pretty much the most epic RPG that you’re going to find on the iPhone. The size and depth of the game are nothing short of stunning, and the overall game experience is a lot of fun, but only if you can get past the sometimes-frustrating controls and numerous bugs that you’ll encounter. This is one of those cases where, if you have a fair amount of patience, you’ll probably enjoy yourself a great deal. That said, if you’re likely to be irritated by the irritations listed above, you might want to hold off on picking this up until it’s been updated a couple of times.