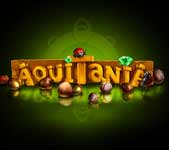 The name Aquitania, at first glance, sounds like an underwater adventure. It’s actually a Roman division in the southwest part of Gaul. The game indeed radiates ancient Rome much like Awem Studio’s previous hit, Cradle of Rome. Despite quickly turning frenzied and missing an introduction to the story, Aquitania‘s match-three gameplay entertains.

Rather than facing a grid full of objects to match, birds perch on top of the grid discharging objects down each column while you work to make matches clearing barriers and tiles. As soon as all tiles are clear, a gem falls into the grid and it’s your job to free the gem by helping it reach the bottom of the grid.

The freed gem finds its way into its rightful place on the special item appearing to the left of the grid such as a ring, scroll, and chalice. Every level brings a new gem for the object, which becomes complete when you’ve collected all gems for the stage. From what I could piece together – as there is no introduction to the story or information in the Help – you rescue special or sacred objects for the citizens of Aquitania. The game provides a tidbit about what happens to the object, and the people let you pass through to the next area where you play the next stage.

Usually when a player runs out of moves in a matching game, either the board pieces reshuffle, you lose a life, or the game ends. Aquitania takes an original approach in awarding bonus points for running out of moves and reshuffles pieces so you may continue. Another rare trait of the game is that objects don’t fall straight down to refill the spots left from the matched pieces – they move diagonally, so you can’t be sure where they’ll go.

The frenzied part enters while players try to clear all the tiles. Not only do you need to break chains and clear doubled tiles, but you must also do a lot of bird watching. This is not identifying species, but rather keeping on eye on the piling objects to prevent them from reaching the birds. If all the birds die, you lose a life. You can still play even when all except one dies; however, when this happens, you’re most likely dealing with heavy object pile-up and trying to stay afloat.

Those birds are a hoot – they look panicky when the objects pile up in their columns knowing they might die, yet they keep dropping objects that could mean the death of them.

The game has two kinds of power-ups: One kind you can use right away and randomly shows up on the grid, like the hourglass that puts birds to sleep so they stop dropping objects for a few seconds and a lightning bolt that destroys random objects.

The other type of power-up builds up as you match enough hammers, feathers, or eggs. When the hammer power-up becomes available, use it to break any tile or chain. Feathers don’t show up on the board until a bird dies. Once you have enough feathers to activate the feather power-up, it destroys all feathers on the grid. However, feathers slow you down, which another reason to avoid killing any birds. (Well, that and the animal rights people won’t come after you.) Actually, you can earn their forgiveness by using the egg power up to restore the birds’ lives – the best kind of power up.

I lost a couple of birds here and there in stages two and three. I hadn’t ventured far in stage three when I went from losing one bird to all of them. Power-ups wouldn’t come save the day and my sanity. Challenge makes a game more exciting, but not when you feel on edge constantly and can’t get any help. While the good and bad in this game is the frenzied pace, you can’t help but keep matching and surviving the more challenging levels.

The game has one game mode and there’s nothing wrong with that. However, adding an easy mode for the easily stressed player would be a boon. Also, a little more back story would be helpful. The music and sound effects rate average – I continuously turned down the volume and left the sound effects at a lower level.

The game will look familiar to those who have played Cradle of Rome, which uses similar objects like hammers and ladybugs. Beyond that, however, they don’t have anything in common. Aquitania may not grip a player right away, but after a few rounds that changes. The game isn’t for the birds, but for it is match three fans especially those who love tough competition.