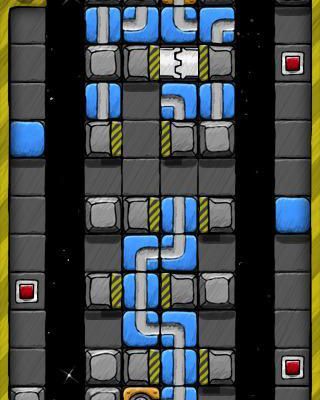 Ever think to yourself “why didn’t I think of this?” There will certainly be a number of developers saying this after taking a look at Aqueduct, a new slider/pipe puzzle hybrid for the iPhone. Though certainly not perfect, it shows that a great idea, solidly implemented, can be a great experience.

Taking the best from two different genres, Aqueduct‘s goal is basic: to connect a valve to a drain. Obviously, the goal is derived from the many pipe-making puzzle games we’ve played over the years. In order to finish a stage, the pipe must be fully-enclosed with no open ends. Sometimes with a t-shaped junction there may be a pipe that leads to a dead end, but that can be closed with a round-ended piece. Otherwise, it’s all about going with the flow.

However, solving the puzzles isn’t as simple as dragging pieces from a sidebar onto a grid.

This time players are forced to move different blocks around like a slider puzzle in order to get the different pieces you need into place. You’ll do this as you navigate pieces around tons of obstacles, gaps, and some mostly fantastic level design. 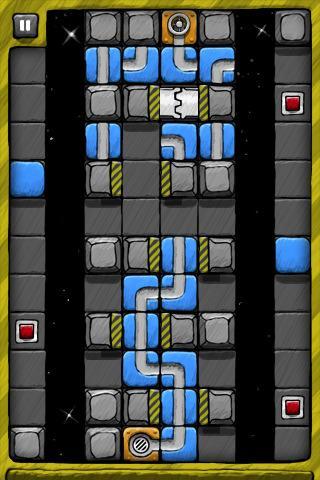 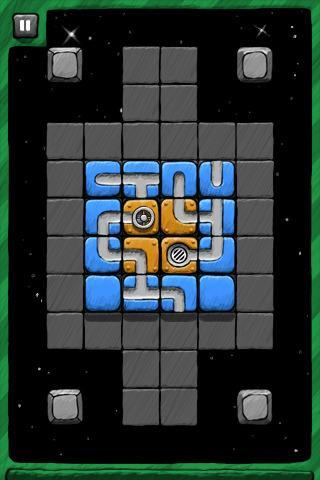 Either helping or hindering your progress in Aqueduct are very fun head-scratching elements. Conveyer belts propel pieces along them, while movable bridge pieces help you get across open gaps. There are switches for gates, and even warping portals from one part of the board to another. Of course, all of these pieces are littered within large grids that have immovable pieces or gaps, meaning you’ll have to move things around a bit in order to manipulate the pieces into place.

In an extra fun twist, Aqueduct sometimes even requires some reflex-based handling for solutions. An early example of this requires you to start a piece along a conveyor belt, but you need to get another piece in place at the end to block the end of the belt. Other than a time limit, it’s very rare to see this kind of arcade-style twitch factor in a puzzle game, and it adds quite a bit of fun.

Aqueduct features over 140 levels divided into six different chapters. The difficulty curve is gradual and manageable. Each new element is introduced using a very self-explanatory tutorial stage, so you’ll never really be at a loss for a solution.

However, not all is perfect in Aqueduct. The first thing you’ll notice are the bland graphics and sound. It’s not necessarily that they’re bad, but they’re more functional than stylish. You’ll certainly have no trouble identifying the different puzzle pieces, but it wouldn’t have killed anyone for some themed levels. The soundtrack is virtually non-existent as well.

The other issue with Aqueduct is the portal levels, as well as some of the other “clever” stages. The warp portals are essentially two-way gates, and the solutions to them range from incredibly simple to obtuse. They seem like a gimmick unto themselves. Speaking of gimmicks, each stage has a name, which is often a hint to the solution. While it’s nice to get the hints sometimes – particularly in later levels – it’s hard to shake that feeling of a level being contrived at times.

These levels, though, are few and far between. For the most part, Aqueduct is a fabulous noggin’-busting puzzle game. The combination of slider and pipe puzzle seems like such a natural fit, it’s surprising there aren’t more games like this. Aqueduct definitely is a great way to drain away boredom on your iPhone.