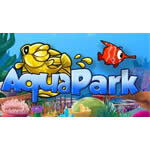 Maybe it’s the fact that we’re wholly addicted to this frantic, finger-numbing exercise in collecting rare and exotic undersea life.

One of the most pleasant surprises in recent memory, kids and adults alike are encouraged to see for themselves. We promise you won’t be sorry; although, in fairness, your hands may be noticeably sore afterwards.

Bursting with charm, you know you’re in for a treat the second you hit the animated, brightly-colored main menu. Like a Saturday morning children’s program come to life, the game smartly relies on crisp, clean, comic book-style graphics and cut-scenes to get its point across. Picture a wide and stunning range of droopy catfish, smiling sharks and goggle-eyed flounder swimmingly happily atop gorgeous coral reefs and sandy sea beds.

To the slow, chirping beat of light synthesized jazz and pop tunes, you’ll experience an inventive and wholly entertaining interactive challenge. The trick to winning: Using your cursor (which doubles as a helium tank) to spastically click on swimming fish, thereby causing them to become encapsulated within an air bubble and float drowsily upward.

Boats – color-coded to match each species and constantly roaming back and forth at the top of the screen – await the receipt of this precious cargo. Your goal, of course, is to accurately time each capture so that fish reach the water’s surface just as the appropriately-shaded ship passes overhead.

Do so successfully, and you’ll earn points. The more points racked up within a set time limit, the closer you come to filling a bottom-mounted meter which awards "ecostars" (available in bronze, silver and gold editions) based on performance.

The sharper your star-retrieving skills, the more objects and backgrounds you’ll unlock in Aquarium mode, which functions as an interactive screen-saver or idle way to pass the time. Naturally, it’s possible to go back and play any level at your leisure should you be unsatisfied with the star ranking initially achieved.

Surprisingly strategic, the outing adds further layers of depth in the form of nifty power-ups, feisty enemies and limited resources to manage.

For example, adversaries like ink-trailing octopi (which lower on-screen visibility) and bubble-bursting puffer fish can decrease one’s point-scoring potential unless temporarily disabled with a click. Of course, doing so depletes your helium total, as indicated by a green, cursor-mounted fuel gauge. While it’s possible to replenish both time and helium by clicking appropriate bonuses on certain stages, know this. Refills aren’t always available, or dropped as often, as one might hope.

Bonuses such as speed boosters (which make captured fish surface faster), disco balls (fish temporarily freeze in place and dance to the beat) and target-stunning camera flashes help even the odds. Cheerfully, from so-called "cutie pies" – females that draw male fish like moths to a candle – to bubble nets which explode in a wide radius, imprisoning multiple victims, the selection of highlighted extras is both impressive and imaginative.

Put it all together, and you get an ultra-attractive little amusement that never seems to ease up on excitement or creativity. While game options are limited – in addition to Story mode, you can also unlock an Endless play variant – sheer production values and hands-on performance more than atone for associated shortcomings.

AquaPark never aspires to be anything more than a highly-personable, smile-inducing digital diversion suitable for consumption in small spurts. And that’s just fine in our book. Men, women and children all can’t help but fall for it, even if, once initial thrills end, you’re still left wanting more.

Whether you’re simply an enthusiast or aspiring software creator, consider it a textbook example of simple, straightforward game design done right. Trust us when we say you’re guaranteed to swallow this one hook, line and sinker.