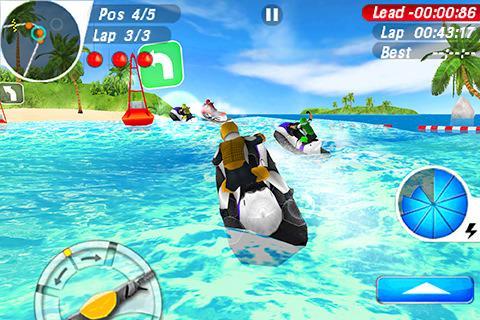 Ever since Wave Race 64 came out way back in 1996, I’ve been a fan of Jet Ski racers. There’s just something awesome about cutting and slicing through the waves. After all, if it’s done well, how is racing on a flat track anywhere near as fun and catching and riding a wave? Luckily, Aqua Moto 2 delivers and captures that awesome feeling of tearing though the waves.

At its core, Aqua Moto 2 is a simple racing game where you’ll be trying to navigate around buoys and beat the other AI controlled racers to the finish line. There’s nothing out of the ordinary or different in that respect that sets this game apart. What does set it apart is that is both controls and looks fantastic, which is really more that can be said of many titles out there. Aqua Moto 2 delivers on what it promises, a fun wave riding Jet Ski racing game.

I’ve personally never been a big fan of virtual touchscreen steering wheels or joysticks, but Aqua Moto 2‘s does a decent job of controlling the action. In its default state, the left thumb will control your steering and the right just lays on the accelerator. It works well, but I found it much more enjoyable to turn on the accelerometer-based steering so I could tilt steer. Also, instead of having manual acceleration I changed it to manual braking, which really just makes it so your jetski just accelerates until you tap the screen to brake.

The good news is the control options are tied around an extremely fun racing game. The driving is smooth and fluid and makes it a joy to race around buoys and other racers. The game gave me more than a few thrilling finishes and left me with a good feeling of satisfaction at having won races.

While the racing excels, the tricking in the game just never delivers. Whenever you hit any kind of tangible air (usually off a ramp) 6 buttons appear on the screen, 3 above each thumb representing easy, medium and hard tricks and the action slows down while you’re airborne to give you time to hit the button. Tapping one of these buttons quickly will trigger the trick, and then you just watch the animation. It’s just not as interactive as I would have liked.

You’ll earn a little bit of boost and some money for each trick, but neither is totally necessary to win races, so you never really want to push your luck on the tricks. It’s not terrible or broken in any way, it just never rises to the same level as the racing, and doesn’t really add anything to the game. 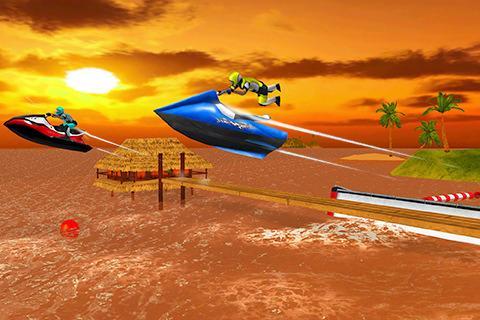 The waves in the game were truly impressive. You really get the feeling of slicing through the water here, with small swells and wakes having subtle effects on your craft’s movement. The waves roll and break and look fantastic. For me this is the most important part of a water based racing game. After all, if it feels like you’re racing on a flat surface you might as well just be racing on land.

The game boasts 48 tracks (though technically it’s 24 with a mirrored mode) and they really do run the gamut from super easy to seriously challenging. They take place over a few different locales like the generically named “Island” to Greece and Egypt. The art assets are reused a decent amount throughout the game but each venue does look mostly unique, since the buildings you see in the backgrounds in Greece aren’t the same as the ones you see in Egypt.

Music was serviceable, but was really just generic high-octane type rock. It was fine in the beginning but after a few plays started to get on my nerves. Luckily there’s an option to play songs from your iTunes library instead. I’m getting to the point now where I want every game to have this option.

A fun gaming experience is obviously the most important thing any game can deliver, and I can say Aqua Moto 2 does a great job fulfilling its duty to the player. The only obvious oversight is any kind of multiplayer experience, which would’ve make the game fantastic. Without any local or network multiplayer play available, it just feels like a missed opportunity. But it’s still an incredibly fun game regardless.