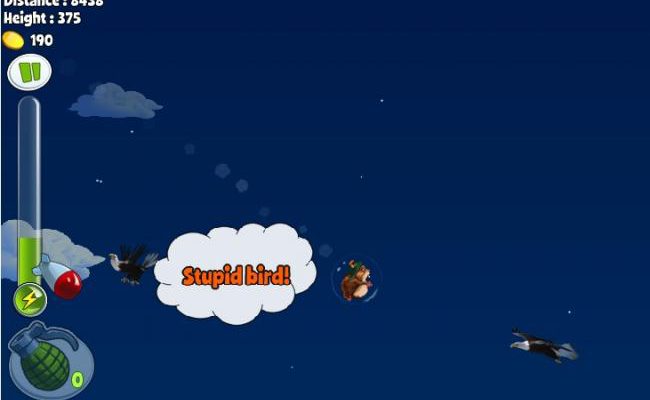 If you frequent Flash games, chances are you’ve seen something similar to Apollo 69 before. It’s an arcade-style experience where you fire a bouncing squirrel out of a cannon with the hope of going as far as possible. Apollo 69 spruces up the familiar formula with an incredibly goofy presentation and lots of power-ups to play around with. It may not be all that original, but it’s definitely a fun way to waste some time.

Your main input in each round comes at the very beginning. Using two moving meters you’ll determine the direction and power with which the cannon will fire. And from there you watch as a poor squirrel, encased in a bouncy ball, is shot into the sky. The bubble allows the squirrel to bounce when it hits the ground, and along the way it will run into all sorts of things. There are birds that slow you down, balloons that carry money and other goodies, and sometimes you’ll even get lucky and land in another, smaller, cannon, giving you a second shot to go even farther. 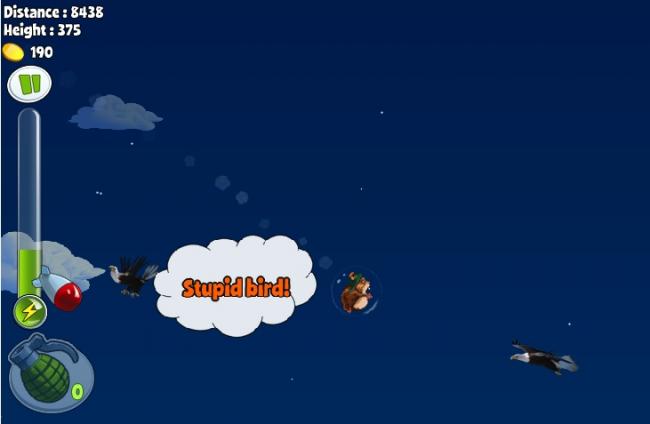 It’s not all passive, though. In your quest to reach impossible distances, you’ll be given power-ups and abilities to help you along. Since your input is so limited in Apollo 69, using these power-ups effectively is the key to going far. There are explosives that give your little squirrel some additional forward momentum, and you can also upgrade various aspects of your cannon, or simply buy a new one all together.

The game features an energy system, but it’s not like what you’ll find in most Facebook games. Instead of limiting how much you can play the game in one sitting, the energy is used to power up your power-ups. Abilities like teleportation or giant explosive bombs require energy to use. And since these abilities are so useful, chances are you’ll be using them often. As per usual, the energy refills slowly over time but can also be purchased with real-world funds. What this means, though, is that Apollo 69 doesn’t restrict how much you can play at all, it just puts a damper on how crazy you can go with the power-ups. 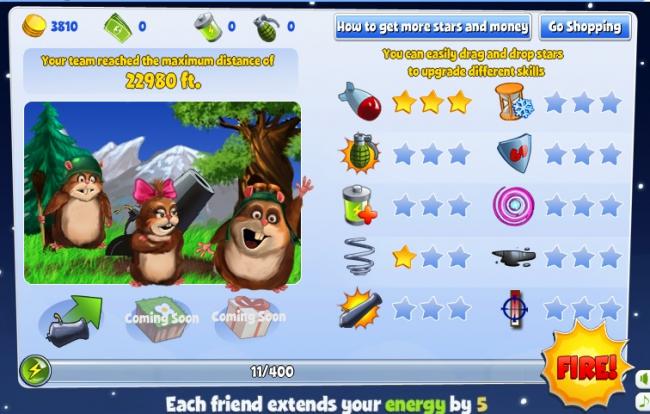 Topping off the fun and frantic gameplay is a truly goofy aesthetic. When a game stars an an anthropomorphic squirrel in a bouncy rubber ball you know it doesn’t take itself too seriously. But when it comes to pure fun, Apollo 69 has it in spades. It’s perfect for playing in short bursts, but the limitless play means that you can keep going and going and going if you want. It’s not a new style of game, but it manages to breathe new life into an already familiar experience. And then fire it out of a cannon.