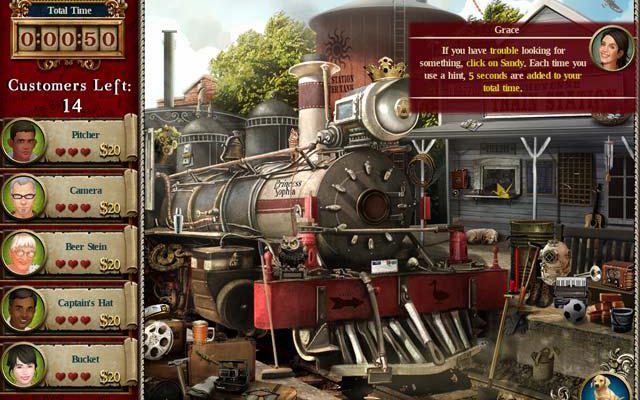 Antique Road Trip USA is a new hidden object puzzle game built directly atop a Norman Rockwell-esque vision of Middle America, right down to the plentiful flags, colorful locals and ceaseless banjo-and-fiddle soundtrack. If that’s your cup of tea this game will be right up your alley and if not, there’s still a pretty good chance that you’ll find something here to like.

The story, such as it is, follows the adventures of Grace and James, a newlywed couple with Donny and Marie smiles and a dream of running their own antiques business. Luckily for them, they have friends across the country who need help with various antiquity-related matters of their own and so while Grace stays home to mind their store, James hits the road, traveling from Seattle to Santa Fe, Charlotte to Carson City and numerous points in between, lending his expertise and making a few bucks to help put their own business on the map. 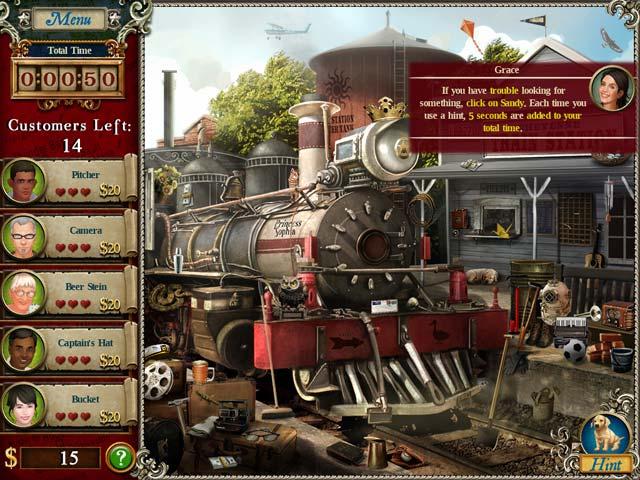 The plot is entirely irrelevant, however, and aside from providing a bit of variation to the hidden object scenes, so are the cities you’ll travel to and the characters you’ll meet. In reality, each “location” in Antique Road Trip is simply a collection of the same half-dozen puzzle types: Three hidden object variations, a jigsaw puzzle, a “spot the differences” puzzle, and “Collections,” in which you’ll either match two identical objects in a group or or pick out one that’s different from all the others.

In lieu of a story to keep things moving, the game relies on Grace and James’ antiques store, which can be grown from its dilapidated starting condition to a full-out showcase of rare curiosities. Players use the cash they earn to buy a range of furnishings and upgrades, while completing puzzles provides the “stock,” like a vintage radio, an old pistol or a model airplane, which are awarded like trophies over the course of the game. It’s all very folksy, as are the dialog and of course the characters, too. In fact, the very first friend you’ll meet is a Wilford Brimley look-alike named, I kid you not, Douglas Liberty.

The game looks nice, with clean, hand-drawn hidden object levels and “real” antique images used for the other puzzles. It sounds good too, although the endless serenade of old-time bluegrass can get to be bit much. Both timed and untimed modes are available, but the timed mode counts up rather than down and awards bonuses based on performances, so most players probably won’t find much point in bothering with the untimed option. It’s 90 levels from start to finish and once they’re all done, bonus levels open up, consisting of a single, massive hidden object scene for each of the game’s 15 locations. 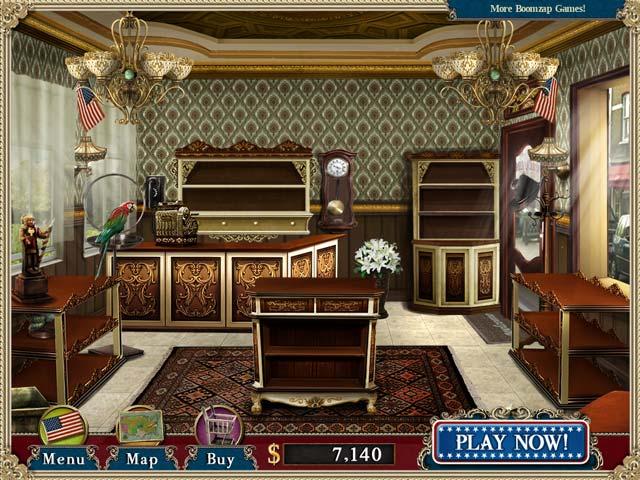 There’s a lot to do and Antique Road Trip does what it does pretty well, but with just the same six puzzles appearing over and over again, it has a tendency to get repetitive. There’s no story to discover, no mystery to solve, and while upgrading the store provides some motivation, there’s so much money flowing in that it’s a relatively simple matter to have the place fully tricked-out well before the end. The game is reasonably challenging but none of the puzzles can be skipped, so if you’re a hidden object fanatic who hates jigsaws, you can expect fairly regular bouts of frustration. Fortunately the help function is generous and there’s no penalty for excessive clicking, so getting stuck won’t be a concern.

I ran into a handful of inaccurate object descriptions during my time with the game; I spent awhile looking for a piston before a click of the help button revealed that what I really needed was a pistol, while a toy dog turned out to be a teddy bear and a counter bell was described as being able to detect fires. On the more amusing side of the coin, the end-game bonus levels require players to find every single object in each HOG scene, meaning it’s quite possible to finish them without ever looking at the list simply by clicking on all the objects on the screen. (Believe me, I did it.) It’s all fairly minor stuff, just little bumps in the road, but clearly one last little bit of polish would have done it some good.

Still, Antique Road Trip is a solid game, if not an especially profound or memorable one. What it lacks in variety or originality, it makes up for by being the sort of thing that can be played a level or two at a time, then put away for a day, a week or a month with no feeling of lost momentum or progress. It’s a time-killer, not a page-turner, but sometimes that’s all you need. And if that is all you need, Antique Road Trip USA is definitely worth giving it a try.