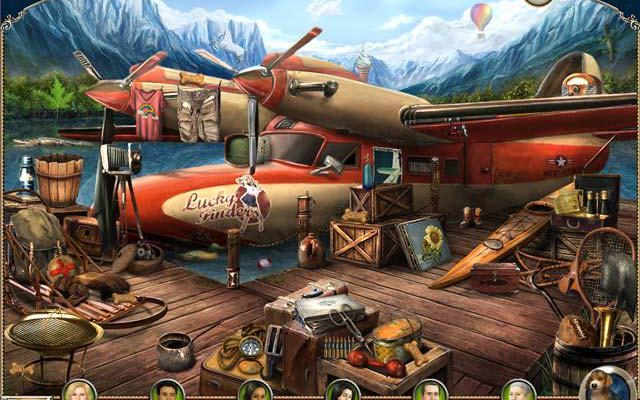 Antique Road Trip 2: Homecoming has arrived and once again Grace and James are trucking across the heartland of America in search of valuable curios for their brand-new shop. With the help of a sharp-eyed puppy, they’ll track down fine antiques, do some restoration work, keep the customers happy and take their new business from an empty storefront to the finest antiquities dealer in Montana – all while providing a lot of hidden-object fun along the way.

Antique Road Trip 2 cleaves very closely to the time-honored mantra of, “If it ain’t broke, don’t fix it.” The original Antique Road Trip USA was a pretty decent game so instead of tearing it down and starting over, Boomzap opted to tune it up a little, give it a good coat of polish and turn it loose. That’s not meant to denigrate the effort, and in fact the results are proof that it was a smart idea. Sometimes it’s best to keep things simple. 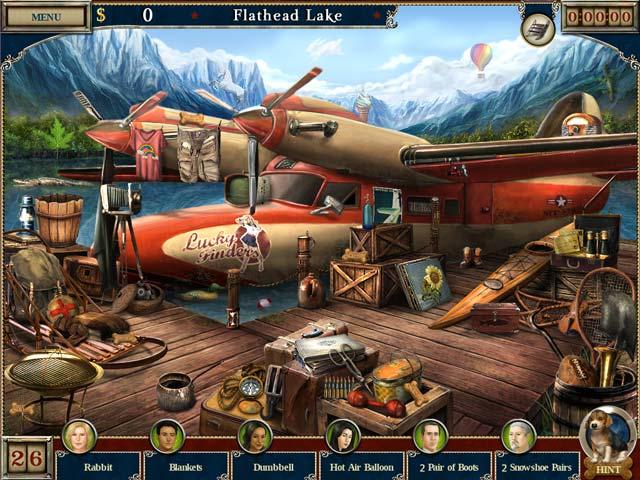 The game can be played in two modes, timed or untimed, but in keeping with its friendly nature the timed mode counts up rather than down and awards bonuses for finishing quickly rather than penalties or mandatory do-overs for failure. There’s no real plot to speak of, beyond “Grace and James look for antiques,” but it’s very lighthearted and upbeat, making it something of a welcome antidote to all the creepy, doom-and-gloom hidden object adventures that are so common these days. The focus is entirely on hidden object scenes, and the worst thing you’ll have to deal with is the occasional impatient shopper.

Gameplay fairly quickly settles into a pattern of lengthy, challenging hidden object searches broken up by numerous short, simple puzzles, like matching pairs of items or picking out their differences. As you play, you’ll earn cash which can be used to upgrade your new store and stock it with all sorts of unusual items from across the country, and also unlock cute wardrobe items for your puppy so you can dress him up like an old-time aviator, an Indian chief or even Uncle Sam.

In many ways, the puppy is emblematic of the whole game; Antique Road Trip 2 is pure, in-your-face Americana that every now and then starts to feel a little bit silly. Flags, eagles and old pickup trucks loom large in an idealized vision of the good ol’ United States of America, rendered in sharp, colorful graphics with a uniquely homespun visual style and backed by a non-stop soundtrack of banjos, fiddles and strummin’ guitars. It’s folksy by formula, and while I’m of the opinion that it’s all easy enough to ignore if it’s not your cup of tea, some players may find that it gets tiresome. 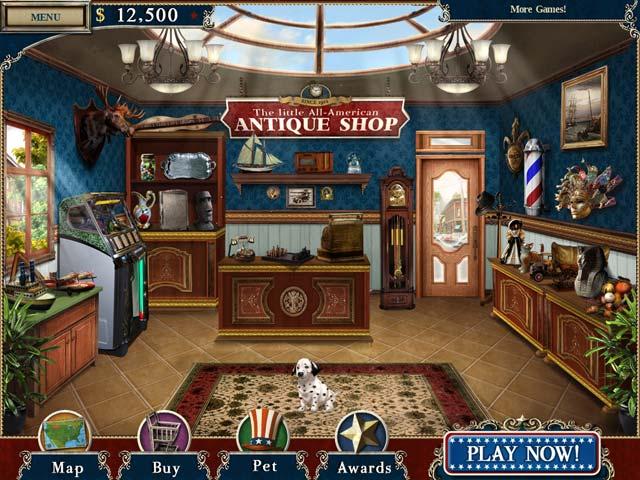 Buying items for the store is an amusing diversion at first but the excitement wears thin once it becomes clear that you’re going to end up with far more money than you could possibly ever spend. There’s not much thrill in choosing between a new ceiling upgrade and that awesome stuffed moose head that just unlocked in Missoula when you can buy both and still have money left over for a hefty down-payment on that F150 Super Duty you’ve been eyeballing. “Awards” are given for accomplishing various tasks over the course of the game but like the store upgrades, they don’t mean anything because most of them are handed out just for showing up. It would take a conscious effort to finish the game without earning all the awards and even with that, only a very few of them can be avoided at all.

As long as we’re on the topic of irrelevant eye-candy, Antique Road Trip 2 also features an attractive map of the states and towns you’ll be visiting, which is absolutely useless because you can’t actually control where you’re going. So unless you care that the old barn you’re digging through is in Flathead Lake – and given the relative dearth of plot, I can’t imagine why you would – it has no impact on anything except to provide a vague sense of progress and something pretty to look at between scenes. And when the game is over, it’s over; you can’t even use the map to revisit old locations for some freestyle hidden object searching, a surprising and rather frustrating oversight.

Despite those complaints, which to be fair aren’t all that terribly serious, Antique Road Trip 2 is really quite a good game when all is said and done. The trick is to see it, and enjoy it, for what it really is: a simple, solid hidden object game, all dolled up for the Strawberry Social. If that’s what you’re after, this might be just the game for you.