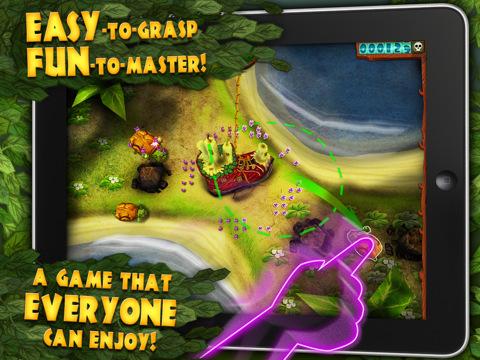 If you were partying with your friends and all of a sudden someone came along and sprayed the room with a noxious chemical turning your friends into evil, mindless zombies, what would you do? Gang up on your friends and beat them into oblivion, of course! Well in Ant Raid, that’s what you’re up to. Thankfully, beating up your monstrous ex-friends has never been more fun.

A combination of tower defense and arcade twitch game, Ant Raid follows the story of an ant colony whose friends have been infected by some sort of virus after being sprayed. The story is told with fun, colorful videos peppered throughout the game, and provides a good motivation for moving forward.

The first thing you’ll notice in Ant Raid is its personality. This game is right up there with Angry Birds or Cut the Rope in terms of having a recognizable group of characters, as well as a theme song that will get stuck in your head for hours afterwards. The whole game is as beautiful and colorful as the opening, with lush, detailed environments and quirky, fun characters throughout.

But gameplay is king in Ant Raid. Each level has a different goal depending upon the scenario. At first it’s all about sending your troops to defeat enemies before your home base gets damaged. Soon after though, you’ll have other tasks to finish in order to earn a three-star rating. These include rescuing fallen comrades, picking up sticks to raise an alarm flag to a certain height, or playing a modified game of Whack-a-Mole. All of this is happening simultaneously, making for fun if, frenetic times.

To defeat enemies, you’ll have to grab some of your ants and send them to the enemy you want to defeat. The larger the baddie, the more ants you’ll need to send. Some of them will make life more difficult, such as snails that knock out your troops upon their defeat (which means you’ll need to send in some active troops to rescue them) or a worm who will shake off your troops, causing them to either die or fall back.

Color plays a role as well. Blue enemies have very high defensive ratings, taking longer to kill. Red enemies are more aggressive and move quickly. The neat part is that, upon defeating an enemy of this color, your ants absorb their power. Defeat enough like-colored enemies and your ants take on those characteristics. Blue ants will be strong, while red ants will slaughter anything in their path and move like lightning. If you play well, you can combine those powers and have golden ants for a level.

On top of that, defeating regular enemies builds a third “Hand of God” gauge. Fill this gauge, and you can activate a mini-game where you tap to defeat enemies as the titular Hand of God. All while trying to gather resources, defend the base, or recover comrades. 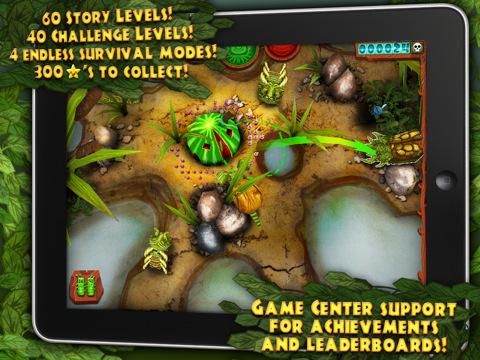 Ant Raid has some serious staying power, too. The main game has 60 levels, plus two more unlockable modes (an endurance mode and a scenario challenge mode where you can earn even more stars). And thanks to Game Center, Ant Raid features a long list of achievements well worth working towards. It’s nice to see this much effort put into it.

In fact the only real problem with Ant Raid happens in later levels. As the enemies start attacking faster and in greater numbers, having to scroll around the level can be a bit of a pain. The ability to zoom out and see the whole map at a glance would be most welcome.

But only one small dent in an otherwise flawless gaming experience isn’t going to ruin anything in a major way. Ant Raid is a fun, quirky and beautiful title well worth owning. If you’ve got an iPad, the HD graphics are really a treat. So go ahead and beat your former friends into oblivion! Ant Raid is definitely worth both your time and money.