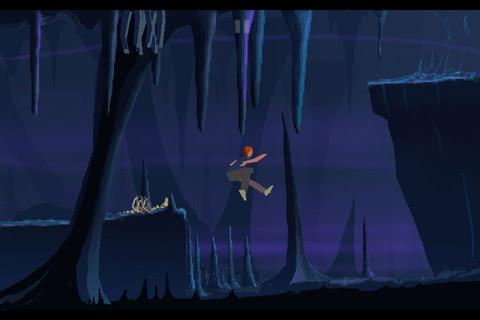 The term “cult classic” is used all too often, yet it’s hard to think of a game that fits this description better than Another World. Originally release for the PC back in 1991 (and known in North America as Out of the World), it was a game that garnered critical acclaim for its unique gameplay and storytelling, but somehow didn’t have the long-term “stickiness” of other ’91 video game hits like Sonic the Hedgehog or Street Fighter II. Still, there are a lot of gamers who hold a special place in their heart for Another World. Lucky for us, the fine folks at BulkyPix, DotEmu, and the game’s original creator Eric Chahi have come together to deliver Another World: 20th Anniversary Edition for the iPhone and iPad.

A unique blend of action, puzzle platforming, and storytelling, Another World tells the tale of a young scientist who, while working on a particle accelerator in a thunderstorm, is the victim of a lightning strike that sends him to – you guessed it – another world.

Unlike our own world, his new surroundings are a bit more primitive and hostile, albeit with laser guns. Big hulking behemoths populate the land. Rocky vistas give way to sterile, futuristic prisons. It’s a nice place to visit, but I wouldn’t want to live there – know what I mean?

As your story begins, you find yourself trapped in a cage with one of the planet’s natives, and that cage is suspended over a large chasm. Quickly you realize that the only thing you can do is swing the cage back and forth. This attracts the unwanted attention of a guard who begins shooting at you. Suddenly, you swing into the path of his laser, freeing the cage from its shackles and crushing the guard in the process.

Within seconds, you realize that this is nothing like your usual side-scrolling action game.

You grab the guard’s gun. “Perfect!” you think. “This’ll keep me safe!” And it does… until you realize that it only takes a single shot to kill you. Again, not what players have come to expect from the genre. In a lot of ways, Another World is about defying conventions. And even though the game is 20 years old, it ends up feeling just as relevant a commentary on the state of gaming as it did in 1991.

It’s hard to gush about Another World without giving away a lot of the fun and surprise, so hopefully the tease about the game’s first few moments above will whet your appetite enough to give this one a try. In case you haven’t gathered yet, the game is really really good.

But what about veterans of Another World? What can they expect from this 20th Anniversary package?

Unlike a lot of retro revisits, Another World sticks incredibly close to its source material. The only real change here is a step up in graphics. They haven’t been changed mind you, so much as refined. Jaggy edges are gone, certain elements like backgrounds and set pieces have a little more detail, and yet there’s not a single thing out of place. And you can see so for yourself – a simple downward swipe with two fingers will let you switch between the new graphics and the original. 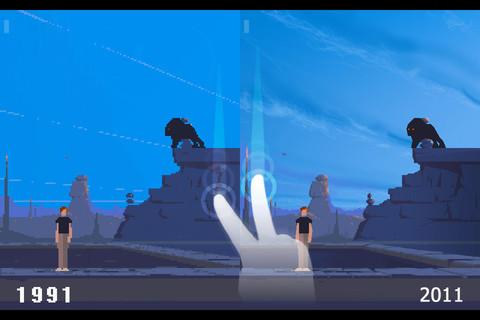 Touch controls are the other obvious new twist here, and as usual, the retro-porting masters at DotEmu have pretty much nailed it. You’ll be able to walk in either direction by holding a finger on the screen, run by double tapping, and jump or crouch by swiping up or down. It’s easy peasy and super-intuitive. The only complaint I had was that, while playing on the iPhone, it became too easy to accidentally press the attack button in the lower corners when I was trying to walk or run. This didn’t happen often, but it was often enough that it warrants a mention.

Beyond these tweaks, though, the package feels a little light for a commemorative edition such as this. There’s no concept art, developer interviews, etc… None of that nice bonus material that fans of the game might be hoping to see. The addition of multiple difficulty levels is nice, but asides from that, what you’re getting here is really the same experience that was offered in 1991. Nothing more, nothing less.

And those multiple difficulty levels will no doubt be appreciated by some, because this game is a touch on the difficult side. Due to the trial and error nature of Another World, players are going to die a lot. If you’re the easily frustrated type, than even on easy, Another World might not be for you.

For the rest of us though, Another World is a wonderful reminder of how unique a video game can truly be. Whether you’re a fan of the original release or a gamer who’s never heard of the work of Eric Chahi before, Another World: 20th Anniversary Edition is one you’ll want to be adding to your collection.