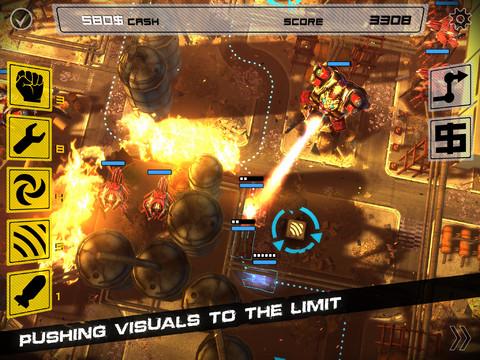 The Terminator movies got it all wrong. The machines don’t want to wipe out all humans, they just want to build a whole bunch of towers and turrets… Which, yes, will then go about eliminating all humans. All is not lost though, since we can fight back via Anomaly Korea, thefollow-up to 11 bit studios’ popular reverse tower defense hit Anomaly: Warzone Earth.

Reverse was the key word in that last sentence. Story isn’t the game’s strong point, but the gist is that mechanical alien invaders hit Baghdad in 2019. They later devastate Korea, forcing you to take command of whatever human forces survive in an attempt to strike back. With the machine’s heavily armed towers dug in everywhere, only a savvy mix of strategy and timing can keep your troops alive.

Actually, it’s your troops’ vehicles that need to be guided to safety in each level. Before they set out, you receive a map detailing your starting point, your objective for that stage, and the positions of all enemy turrets. The convoy’s path can be redirected at any intersection, so you can opt for the most direct path possible, try to take out all of the towers, or anything in-between.

Your vehicles don’t stop once they start moving, attacking any turrets they encounter as soon as they’re within range. You can influence the combat by placing special ability icons on the battlefield that tip the odds in your favor – but only while your vehicles are in the icon’s radius, and only for a few seconds. More specials are dropped on certain spots on each map for your robot-destroying convenience.

Cash accumulated by defeating enemies can be spent on the fly to upgrade existing units or purchase new ones. Damaged vehicles can also be switched to the rear of the convoy for more protection. Careful use of resources is key, as is a good mix of vehicles. Gamers who played Warzone Earth will appreciate the addition of a new heavy tank with a nifty AOE attack that charges up as towers are destroyed.

Being the murderously creative types that they are, the machines have some new weapons too. The flamethrower is especially tough, taking quite a bit of punishment and setting vehicles on fire until a healing special can put them out. On some levels, you’ll find yourself saving heals for that purpose alone.

Anomaly Korea keeps you from getting too cocky about your commanding skills by throwing in curveballs in the later stages. One level asks you to take out all of the targets within large warehouses, where you are cut off from reinforcements or special ability drops. The late game twists are especially fiendish, treading the line between challenging and unfair.

You can always crank down the difficulty if things get too tough. Whether you play on Casual, Advanced or Hardcore, you’ll be awarded medals based on efficiency (keeping your troops alive) and ruthlessness (taking out as many machines as possible, something the human race would really appreciate). An additional mode called Art of War adds extra replay value with a series of training scenarios that force you to concentrate on a particular part of your game.

The graphics, which were already good in Warzone Earth, got another boost for this go-round. The level of detail in the urban combat zones is pretty remarkable considering your view is from the top-down and at a distance, and there’s a visceral feel to the impacts and explosions during combat. Sound effects help with the frenetic feeling when your vehicles are under attack, though if you don’t get tired of hearing one of your drivers shout “Tag ’em and bag ’em” or “What are we doing here, sir?” for the hundredth time, you’ve got a higher tolerance level than I do.

Early press for Anomaly Korea was careful not to call the game a sequel, and that seems like a wise choice. It’s more than an expansion but less than a true part two, especially when it comes to the bare bones plot. The gameplay is the thing here though, and it remains as addictive as before. Feel free to bump this review score up another half-star if you’ve never experienced reverse tower defense done right, and prepare to spend some of your free time fending off our would-be robot overlords even if you have.