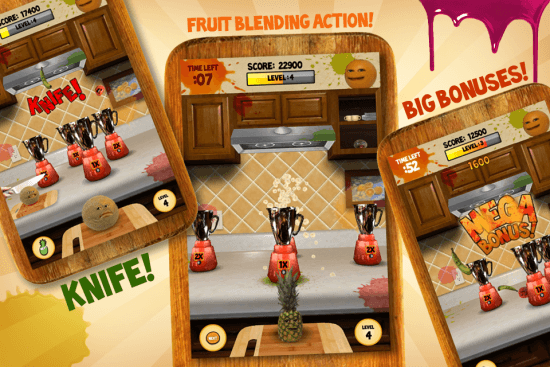 Annoying Orange Kitchen Carnage is the very essence of a mobile game: Simple, fast and fun.

Licensed games are a dime a dozen on the iTunes App Store, but rarely do we ever see a game based around a YouTube comedy series. With this in mind, Annoying Orange Kitchen Carnage is one of those titles that literally had me shaking my head, pondering the very existence of it.

The entire object in Annoying Orange Kitchen Carnage is to flick different fruit and vegetables into blenders to earn points. Earning points will allow you to level up as you play, earning you additional blenders to throw objects in and therefore additional chances to score points. A timer is constantly ticking in the background that will end the round if allowed to run down, and your final score will be shown.

The additional blenders in play also increase the score multiplier, so that a fruit or vegetable scored in these blenders will earn you even more points each. The only downside is that these more valuable blenders tend to be in more difficult spots on the table, so a more accurate shot is required.

A few other elements also shake things up once in a while, with cutting boards and pear cupboards helping to keep things fresh. Occasionally a large message will appear on screen telling you to “SHAKE!” Doing so will open up a cupboard with a pear inside. Other times, a cutting board will appear on the table in which you can toss objects onto. This will make the orange yell “KNIFE!” as it is sliced into bits, earning you extra points.

The only issue I found with the game was how blatantly annoying it is. Don’t get me wrong; I wasn’t expecting the most pleasant experience from a game with a title like Annoying Orange Kitchen Carnage, but that element of the presentation is driven into the ground. The titular Annoying Orange is constantly berating you in the background. Every time you miss a shot, make a shot, or finish the round, he just keeps on jabbering. It makes no difference if you win or lose, the orange never ever shuts up, and I can’t stress quite enough just how annoying that is.

Despite the Orange’s insistence on living up to its name (a fact that will no doubt please fans of the series), Kitchen Carnage is definitely fun in small doses, while its several dips and turns along the way help to make this a bit of an addictive experience as well. Social elements such as score sharing on Facebook or Twitter also add a sprinkle of a competitive element so you can challenge your friends, or even the whole world if you want.

While simple arcade games that offer little more than high scores are far too common on the App Store, that doesn’t mean that they’re not fun. Annoying Orange Kitchen Carnage may be a bit of a cash-in while the YouTube show is still hot, it’s at least a cash-in that gamers can have a lot of fun with.