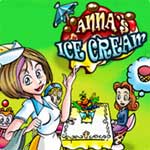 With fall rearing it’s head, and winter around the corner, you might be missing the summer sunshine. What says summer more than island vacations and ice cream? Anna’s Ice Cream is a time management and service game which throws in a bit of both.

In Anna’s Ice Cream, Anna’s uncle owns an entire tropical island which he’s set up as a holiday paradise for ice cream lovers. He’s about ready to retire, but rather than sell off his life’s work, he’s decided to leave it all to lucky Anna. Before she can inherit, however, she must prove she has what it takes to sell ice cream. To help her out, she’s given a pair of trained serving monkeys names Mikey and Molly. On a side note, having some experience working with baboons, I can tell you they fling around a lot more than ice cream…most of which would make you think twice before accepting anything food they offer you! But hey, this is a game, right?

In contrast to lots of other waitress games, you’ll be working on an assembly line. Anna first assembles customer’s orders by selecting a plate or cone or bowl, and adding the appropriate number and type of ice cream scoops (called ice cream “balls” in the game). Once unlocked, she can also add a variety of toppings like sprinkles and cherries, and some optional items to boost costs like decorations. Later, there are speciality sundaes available, too. You will automatically discard an item if you reach for another item while holding the first, so you’ve got to be careful what you pick up.

Ice cream tubs can run out, so you must refill the empty buckets in the ice cream machine. You can see when it’s getting low, but it’s hard to tell for sure when it will run out. This is frustrating if you only have one scoop left, and the customer requests a 2-scoop cone. You might lose the order to the trash, since you will need to wait for the machine to fill up the vat before adding a second scoop, and the assembly machine doesn’t stop.

The customer’s orders then progress along the assembly line to Mikey, who automatically adds them to a tray. If an incomplete or incorrect order reaches him, he’ll discard it, so you need to be quick.

Once on the tray, you can then prompt Molly to pick up the orders and deliver them to customers. She will also need to bring some customers napkins, and clean up the tables. The quicker you serve customers, the more likely they will make a second order.

As you advance, you can buy special upgrades for both your store and your monkeys. Shop upgrades include better ice cream machines, decorations to improve customers’ patience, and optional additions to boost the cost of your ice cream. Monkey upgrades include juggling balls for entertaining, and bananas and apples which you can feed them to increase their speed.

As is typical in serving games, customers may run out of patience and leave without paying. You can tell how impatient a customer is getting by looking at gradually darkening bubbles over their head. You can appease frustrated customers by giving them treats like cookies, or by having Molly do tricks like juggling to entertain the whole room. It can be frustrating if customers at two different tables request the same item. Molly will deliver to the first table you serve, even if the other customer has less patience.

Once you’ve finished a level, you’ll be shown your total earned cash. There’s a minimum you must earn to advance. This total is tallied by considering expenses (including groceries and inventory, and Anna’s Uncle’s share), and profits (including sales and tips). If you fail to meet the minimum, you’ll lose a life. After losing three lives, you’ve technically lost the game, but can still continue to play without penalty.

As a side task, you can collect golden ice cream cones to unlock special ice cream opportunities.

Click the golden ice creams before Mikey gets to them. After collecting 5 golden cones, you’ll be given the chance to mix a new flavor for judges to taste. Your supplies are limited, but if you make a good mix before running out of ice cream, you’ll be able to serve a new ice cream type to customers. Pick the number of ice cream scoops to use, between one and 10. You get 5 tries to guess the right number, and the judges will hint that it is too weak or too strong. It’s not clear in the instructions, but adding more scoops makes the flavor stronger. So, if you are told that 5 scoops is too weak, try a number of scoops greater than 5.  Even if you fail, you’ll be able to use that ice cream flavor a few rounds later, automatically.

Once you’ve made it to the zoo in story mode, you can play in “happy hour mode.” This is the game’s action mode. Depending on your skill level, you can select easy, normal, or hard. Customers line up at the counter and want ice cream fast. Molly doesn’t feature, so Mikey serves ice cream directly to the customers. You just prepare the ice creams as fast as you can, gaining access to more ice cream types as you play. There are no instructions beyond the basics, so you’ll have to learn how different features work on your own, unless you’ve already unlocked them in story mode (like extra toppings and special sundaes). If you lose more than three customers, the game is over, and you’ll be shown your time and total score. Happy hour mode allows you to compete against yourself for the highest score, but unfortunately there’s no online mode, so you can’t compete against real players.

In regards to production values, the graphics are typical cartoon 2D, with animations, and the music is a bit repetitive, but fairly average. Neither really stand out, but are what you’d expect. As for length, that is also standard fare,  running several hours.

While Anna’s Ice Cream has some interesting elements, such as the flavor mini game and serving monkeys, it can suffer from slow pacing. The ice cream theme has been well used in casual games, so it lacks originality. While it’s a okay game on it’s own, with so many time management games to compare it to, it doesn’t really stand out as unique or particularly exciting to play.

Between the Worlds Review