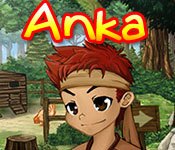 Anka, a new puzzle adventure from Ovogame, has a great concept but suffers from middling execution. The idea is to provide players with a wide variety of brainteasers-word searches, mahjong, tile-sliding puzzles, and much more-within the context of the game’s story, which concerns a boy trying free his mother from jail for a crime she didn’t commit and find his missing father. Sounds great. The problem is that it ends up becoming a jack-of-all-puzzles-and-master-of-none. The variety is nice, but few of the game’s conundrums are compelling enough to make us crave more.

The game begins with our hero, young Anka, helping his parents around their farm. At the start it feels as though it might simply be a gussied-up hidden object game, as our early goals involve such objectives as searching for dozens of hidden eggs scattered in and around the house.

Turns out this exercise simply trains players for the rest of the game by teaching us the ways in which we should be prepared to look-move stools, check in drawers, rifle through bushes-to find objects required to complete tasks from here on in. We will, for example, need to use similar techniques to find the elements of a scarecrow we need to build, locate pieces of evidence scattered around a town, and find the pages of a newspaper requested by a passenger on a train on which Anka hitches a ride.

All of this seeking is punctuated by two dozen other puzzles that have us doing things like popping as many balloons as possible with a set number of arrows that are governed by gravity, moving groups of cogs around to match a given pattern in order to cause the town gallows to malfunction, and identifying the one lone picture in a grid filled with pairs.

Most of these activities are pleasantly distracting; fun for a few minutes but not something you’d pine to come back to once completed. That makes the game’s bonus feature-the ability to play all of these mini-games over and over again outside of the story mode-a bit pointless. There are a few games that players might show interest in pursuing on their own (the ability to cut pictures stored on our computers into jigsaw puzzles is one such example), but most players will look at the list and realize that there’s no real need to revisit the large majority of these activities.

The adventure-style puzzles aren’t much more compelling, due mostly to some unfortunate and frustrating design missteps. For example, when building a rod to catch a fish that I needed to lure a cat, my first thought was to go back and pick up some lures that were residing in an old chest I had just found. But the game forced me to create a lure from scratch by cutting open a rotten apple and digging out a worm.

Similarly, when I was baking a pizza I saw plenty of items I knew I’d need, including an oven mitt. However, for some reason the game wouldn’t let me grab the oven mitt while the pizza was cooking. I took that to mean that it wasn’t actually needed. Not until after I burned Anka’s hand trying to remove the pizza from the oven was I allowed to retrieve the mitt.

Annoying issues like these are ubiquitous throughout the game. Be prepared, for example, to repeatedly visit people and locations in order to find new objects and information that will only pop up or become available when needed.

The visuals are also a bit disappointing. Anka lives in a tribal-looking thatched hut and seems to wear a tunic made of animal skins, yet his mom wears a white collared shirt under a sweater vest. Likewise, the townsfolk dress like citizens of the Wild West, but we have at our disposal such modern items as cameras that use film.

It seems likely these paradoxical aesthetic decisions were made with an aim to create a quasi-fantastical setting not tied to any particular time, culture, or location, but the result, unfortunately, is just a confused mess.

I’m coming down pretty hard on this one, and I don’t really mean to. It’s a moderately fun diversion for folks who prefer being confronted with a variety of brainteasers rather than just one puzzle type for a whole game.

My beef is simply that everything-from puzzles to artistic design-seems just a bit too slapdash for the overall experience to be really satisfying. There are some good ideas here; Ovogame just needs to work out the kinks for their next game.