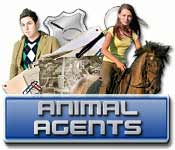 The little rabbit Fridolin is the latest in a long line of pets to go mysteriously missing in what is becoming a common theme in hidden object game storylines. (Not that we’re complaining – only a cruel, heartless person wouldn’t jump at the opportunity to rescue cute animals.) In Animal Agents you’ll do just that, with the unique option of playing as either Anna or Justin and exploring the story from two different points of view.

Anna enjoys spending her holidays on her uncle’s farm, where she’s joined by her friend Sarah and Sarah’s brother Justin. Unfortunately, any hope of a peaceful vacation is shattered when Sarah’s new bunny Fridolin goes missing from her backyard. Anna and Justin find evidence that a burglar has been in the backyard, and these clues lead them on an investigation to find out who’s been snatching peoples’ pets from the neighborhood.

While gameplay is pretty standard hidden object fare – search through different scenes to look for a series of items on a list, some of which turn out to be important clues – what’s nice about Animal Agents is that the clues you’ll find while searching carry over into the next phase of the investigation, resulting in a clear and coherent story. For example, finding a bottle of pills and a shred of fabric in the backyard leads Anna to head to the pharmacy to try to identify the pills, and to the tailor to see if the fabric matches any clothing. There are 21 scenes to visit in total, including the animal shelter, hotel, diving school, zoo, scrap yard, train station and stable. These locations are marked on an attractive-looking map of the entire town.

While searching for objects, you can find and click on special items that will bestow bonuses like adding more time onto the clock, or revealing the locations of hard-to-find items. There are a limited number of hints, and unlike some other hidden object games you have to find all of the items (instead of most of them), which can be quite challenging.

As well as finding items on a list, you’ll occasionally have to search for items by silhouette, or click on pairs of objects like two paw prints, two roosters, or two pieces of fruit. On a few occasions you have to help people find things based on phrases; for example, in one scenario you have to help your aunt clean up her office by responding to sentences like "I’m missing a roll of tape, and the stapler is gone too."

The final twist the game will throw at you is puzzles based on sound. In these scenes, your list of items to find is replaced by sound clips. Clicking on one will play a sound associated with a particular object that you have to find in the scene, such as the "meow" of a cat, or the "glub-glub" of a fish’s aquarium. While this is a great idea in theory, there wasn’t enough variety on the list: literally half of the sounds were "meows" that corresponded to four or five different cats to find, which is confusing to say the least.

While Animal Agents is a fun and engaging hidden object game with a decent story, it’s not without its faults. Some of the items are rather indistinct from the background, making them hard to find. Some items were also mislabelled (both a recorder and a set of panpipes were incorrectly labelled "flute") or simply too vague – for example, "brush" and "bag" could refer to more than one item in the scene and it was a matter of trial and error to figure out which one the game wanted me to click on.

The game’s music is not bad, but often seemed out of context. In one example, a bright and exciting carnival scene was accompanied by an introspective solo piano track that was completely at odds with the garish visuals.

It’s possible to finish either Anna or Justin’s story in less than two hours, but the beauty of Animal Agents is that you can play through the adventure a second time from the point of view of the other character, thus doubling the gameplay length. There’s also a Puzzle Mode where you can go back and play a scene individually to beat your best time.

Animal Agents won’t turn the hidden object genre on its ear, but it’s certainly fun while it lasts.