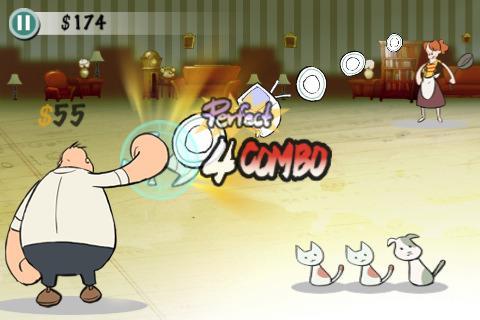 Rhythm games were once a wild and exciting frontier where it seemed that anything could happen. Then, thanks to the success of franchises like Guitar Hero and Rock Band, every rhythm developer seemed to trade in their originality for a fake strum bar and some indie rock music. The iPhone has become a haven for those looking to still showcase some originality, but while Angry Honey may not follow the formula set by popular rock replicators, it’s doesn’t offer as unique an experience as you might expect.

In Angry Honey, players control the reflexes of a defensive husband as he dodges a variety of household items being thrown at him by his wife. Plates, kettles, televisions – that angry lady seems ready to throw everything but the kitchen sink. As the items approach the husband they’ll enter a circle. When that circle turns red, the player taps to have the husband destroy the incoming object. Miss an object and it’s game over.

The tapping to dodge items is done in rhythm with the music, which speeds up and slows down regularly to keep you on your toes. And while the player could just keep tapping over and over without concerning himself with rhythm, it won’t earn you any combos or help to beef up your score – and at the end of the day, Angry Honey is all about score. To get a combo, you’ll need to make contact with each item precisely when it turns that circle red. Do so a few times in a row and you’ll see your combo number climb.

While this may sound like a strikingly unique approach to rhythm gameplay, those deeply entrenched in the genre will no doubt notice the influence it draws from two popular Japanese rhythm games. The tapping of the circle at a precise moment to build up a combo is a basic gameplay component of Osu! Tatakae! Ouendan!, while the breaking objects as they’re thrown at you in rhythm is an element lifted directly from the rhythm mini-game compilation Rhythm Tengoku.

The gameplay here isn’t nearly as good as the games that it borrows from, but you can hardly fault Angry Honey for that. Those titles are treated like crown jewels amongst hardcore rhythm aficionados, and Angry Honey, admittedly, is nothing more than a 99 cent time waster on the App Store. With simple mechanics and a surprising amount of charm, you’re getting your money’s worth no matter how you slice it.

The charm we mentioned has less to do with the gameplay than it does the art style. The game feels like a newspaper comic strip come to life. Simple animations, like the husband breathing in time to the music, really help to set the mood of the game. The music lacks the same pizzazz as the rest of the presentation, but it works given the confines of the game.

Angry Honey may walk the fine line between rip-off and homage, but there’s no denying that it offers up a fun little diversion with an incredibly low price tag. If you’re looking for a different rhythm experience than anything we’ve seen on the iPhone so far, there are worse ways you could spend a dollar.