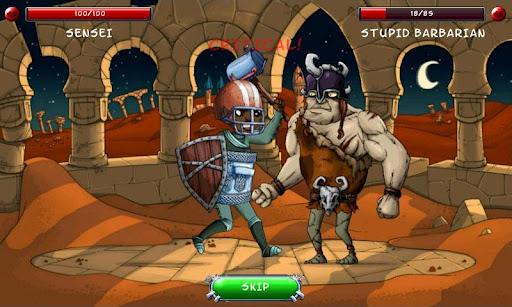 Angry Heroes Online has some great art going for it, and it’s been loaded with plenty of features and options to play around with. Yet, it doesn’t do a very good job of disguising the fact that there really isn’t… that much to do. You boot it up, you hit some static images to activate new quests, then you wait around to activate some more. I can see why these characters are angry.

As the prototypical plucky adventurer,you’re thrown out into the world to take on quests and defeat other players in the battle arena, all the while updating your equipment with any gold you acquire. You’re presented with a village from which you can take part in each of the game’s different chores. Head to the tavern, and you’ll be able to take on quests. The guardhouse lets you watch over the village for cash. The arena is where all the online battling happens, as you take on other players.

Elsewhere, you’ve also got your castle to tend to. By upgrading each individual component, such as the walls and the road leading up to it, you can guard yourself against attacks, and in turn raise your character’s stats. Purchasing weapons and armor for your character also has the same effect. Angry Heroes Online looks the part, with comic visuals and animations that are humorous throughout. Watching your ginger-haired human bashing an orc to death with a plunger is good fun, and the various enemies you find on your quests are always entertaining.

There’s plenty to stick your finger on too. Besides the aforementioned activities, you can also deal in a bit of mushroom (the game’s premium currency), and delve into the cave once you’ve levelled up enough. Angry Heroes Online throws plenty of options at you, there’s no doubt about that. The problem is that, once you look past all the bells and whistles, there isn’t really much to this package at all. Social interactivity is limited to simply picking a name to beat and, at most, the rest of the game involves waiting for a timer to hit 0 so you can watch an animation that you can’t control, and then repeating. 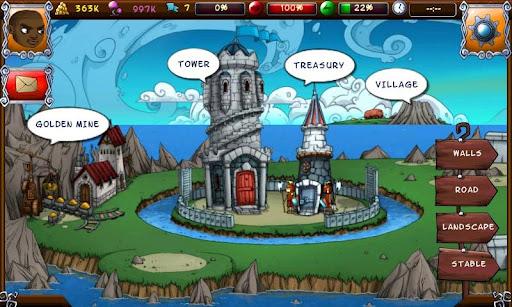 Take the quests, for example – at first the descriptions and the rewards seem to indicate what you’re heading into. After a short while, however, you’ll realize that it didn’t make any difference whatsoever; regardless of what the actual quest was, they all play out the same – hit go, watch a static image for five minutes, watch a battle animation, repeat.

The castle guarding job really distils this feeling down to its fullest ache. You choose how long you want to guard the castle for (based on how much gold you want to earn), then your character stands against a wall for up to 12 hours. Of course, you can quit out of the game and come back later, but really, whose idea of fun was this?

After only a short while with Angry Heroes Online, it became clear that this is less a game, and more a waiting simulator. It’s ironic, I suppose, that in the game’s attempt to come across as parody the MMO genre, it ends up feeling like a bit of joke itself.