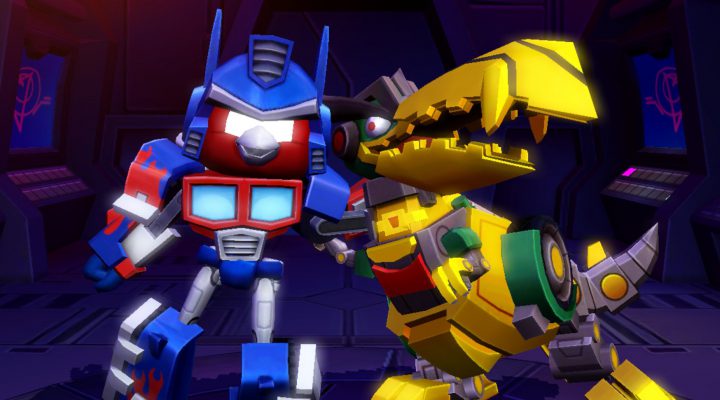 Absurdly charming, and a love for the game's silly premise.

Angry Birds Transformers is one of those games that is a lot better than it has any right to be. A free-to-play combo of Angry Birds and Transformers? Even though it comes from big money sources, this is a game that manages to have a lot of fun (despite suffering from repetition).

While a standard Angry Birds physics-puzzler with robots would have been a neat enough game, Rovio instead decided to make Angry Birds Transformers an auto-running action game. It’s still related to Angry Birds for sure, as it’s about shooting enemies located in the background as they stand atop structures of wood, stone, and glass. If you’ve ever played an Angry Birds game and thought “it would be so much simpler if I could just shoot the structures and watch them collapse,” then this is the game for you! 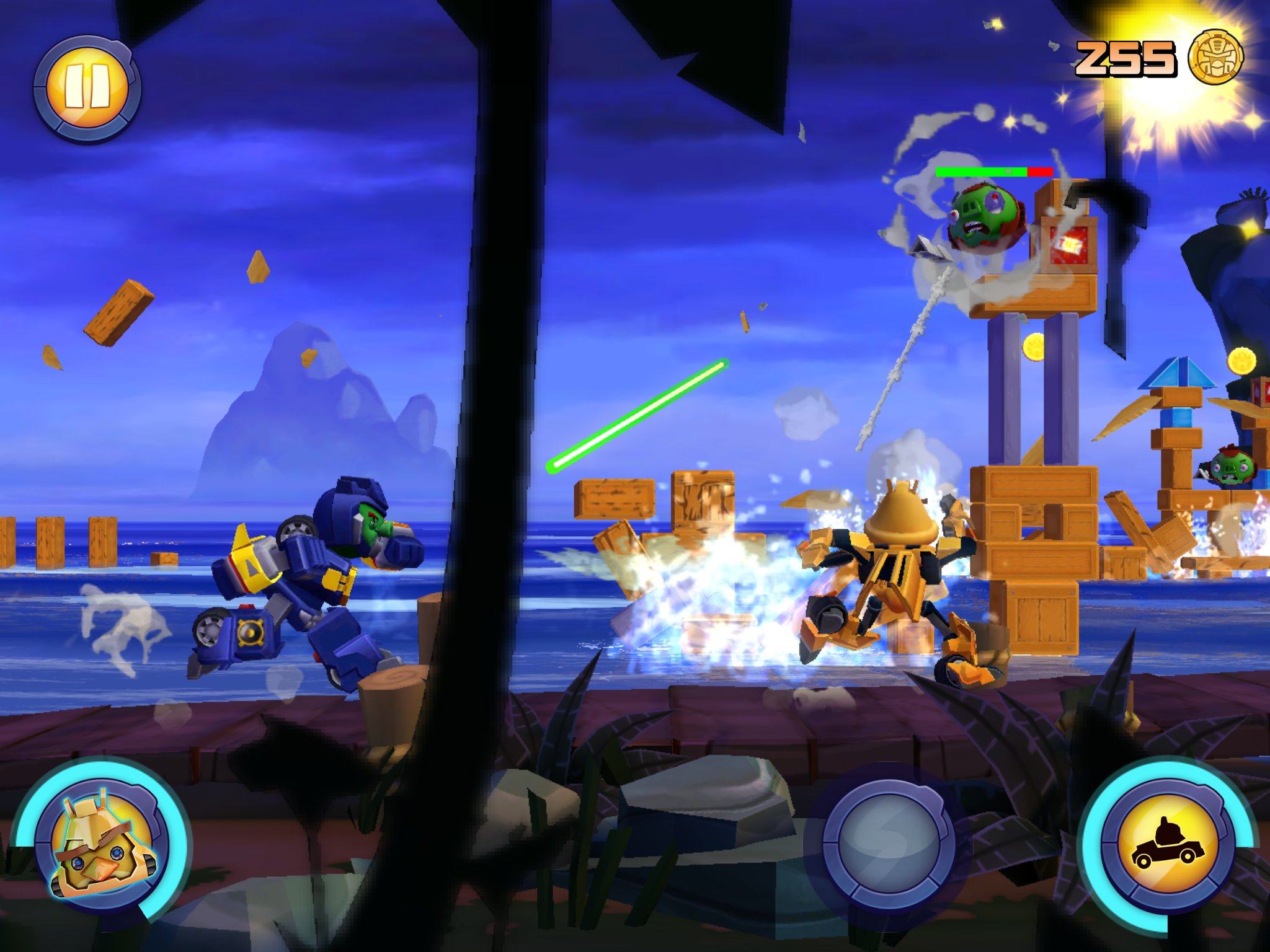 Each Autobird and Deceptipig has a different weapon to use, and each level requires a bit of a different approach. There’s the ability to transform into vehicles as well, which is used to dodge falling structures and to get out of hairy situations.

The combat is generally about finding the weak spot in a structure, be it a glass platform or taking the time to destroy a key wood or stone block that will hurt the pigs as quickly as possible, with coins awarded for destroying materials along with pigs. Why the Deceptipigs are fighting their hog bretheren is unclear.

The ability to call in another Transformer for assistance is helpful – these are based off of other players’ upgraded characters, and it sends them a reward in addition to being good way to take care of tricky situations.

There is a lot of waiting to be done in Angry Birds Transformers. There’s no explicit energy system, but wait timers come in to play a lot. Levels are uncovered by robots over various lengths of time. Healing requires spending coins and waiting. Upgrades involve waiting for them to be applied. Still, it’s not too bad – the hard currency is handed out at NimbleBit-esque rate, between random chests and earning bonuses for people using your Transformers in their missions. Honestly, while the game does have those wait timers, it does a great job at feeling like there is a core game there to enjoy without it getting in the way of itself. It can be played for a long time for free.

The game winds up being on the repetitive side, as missions are pretty much always “run forward, try to make it to the end” with few surprises. So, while I’d love to see more variety in the game itself, at least the game manages to limit itself enough through those wait timers to stretch out the whole concept. And really, the game winds up being about unlocking new Transformers and leveling them up as much as it is about using them in particular. If you enjoy managing a stable of characters, this is the game for you. If you don’t, then Angry Birds Transformers might not go so far in your books. 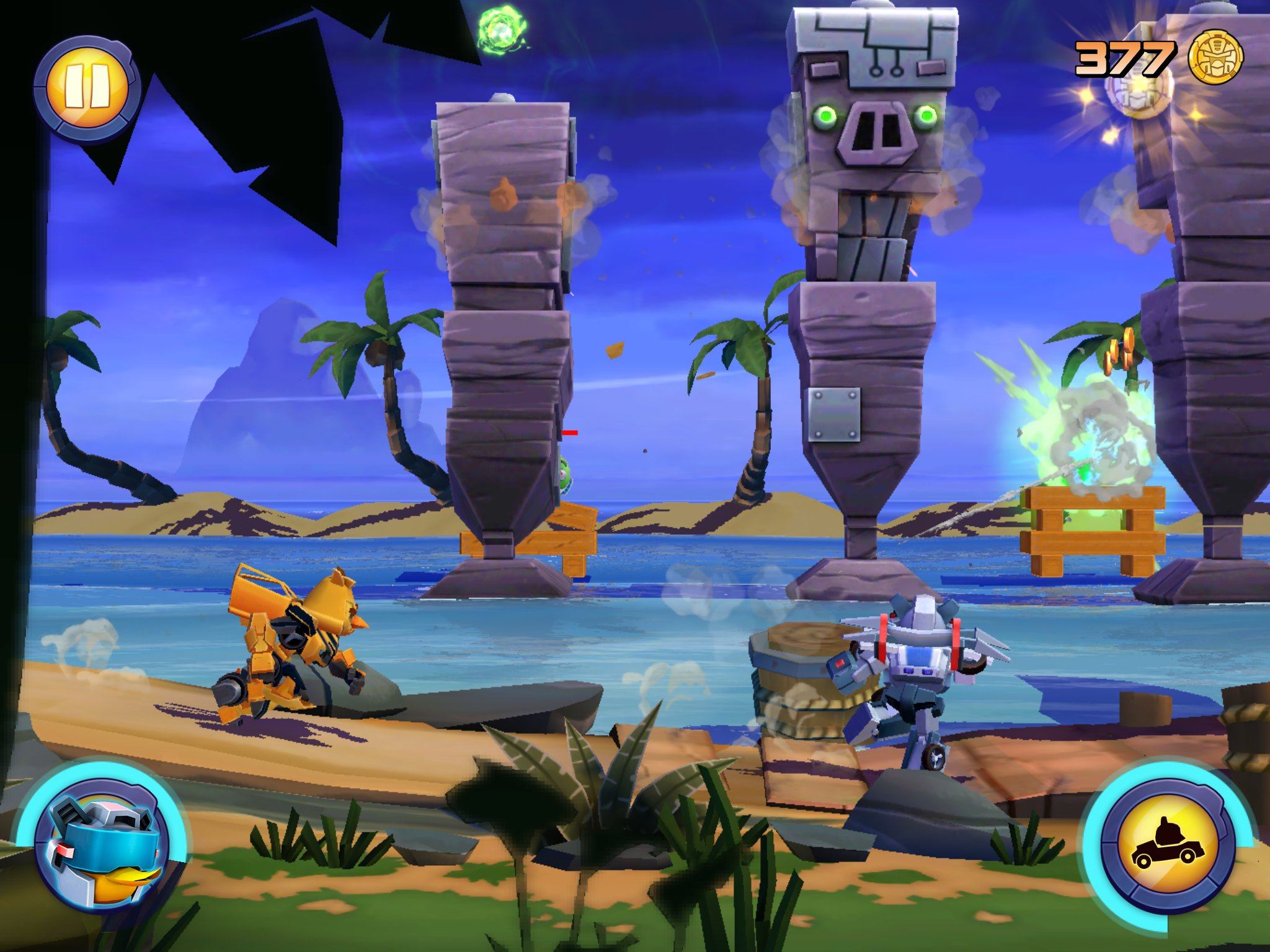 I can’t help but applaud Angry Birds Transformers for having a soul to it that free-to-play games can so easily lack. It’s goofy, with the Autobirds and Deceptipigs congratulating each other or not depending on their alignment. Why they’re even helping each other out never really makes sense. There’s the occasional VCR effects, like how taking a lot of damage makes the screen go blurry. Even the game’s intro goes a long way toward being great, as it pays homage to the 80’s aesthetic that Transformers feels inspired by. Sure, this whole thing is an excuse to sell toys, Jenga games, and IAP, but it makes sure to have fun along the way. That’s a great thing! There’s no reason why tie-ins have to be lifeless affairs.

Really, I recommend at least checking this one out. The game’s got enough personality to be entertaining, and it’s possible to have a lot of fun for free with this one if you’re patient. It’s not perfect, but it’s so charming that you have to at least give it a spin.

Ready to transform and roll out? Be sure to read our Angry Birds Transformers Tips, Cheats and Strategies!