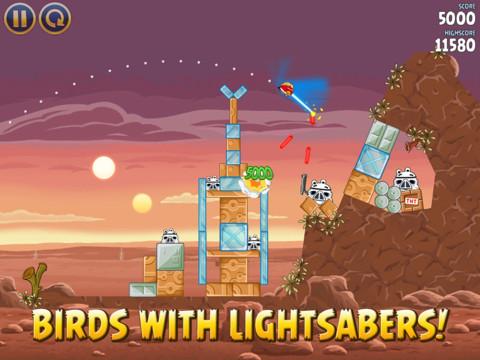 The force is strong with this one

When it comes a franchise with as much marketing and brand power as this, you just know it’s only a matter of time until another big release comes our way.  That’s right, it’s Angry Birds time again.  Oh.. no, wait.  I mean it’s Star Wars time again.

In what will likely be remembered as the most sensible combination of brands since peanut butter was married to jelly, two of the biggest marketing mega-giants of our time have been smooshed together in what can only be described as the biggest thing to hit the holiday season since Santa’s sleigh incident on the I-90 back in ’83.  But while toy departments might be filled to overflowing with Angry Birds Star Wars playsets and plushies, the real diamond in the franchise crown is a little app called – you guessed it – Angry Birds Star Wars.

Marking the first notable pairing of Angry Birds and an existing brand since 2011’s Angry Birds Rio, Angry Birds Star Wars takes the existing Angry Birds gameplay and infuses it with characters, story, and settings from the Star Wars universe. At launch, this exclusively means the original 1977 release (Episode IV: A New Hope) – but new content updates are already being teased that will take players to Hoth, the Ice Planet from The Empire Strikes Back.

The gameplay here will be instantly familiar to fans of the Angry Birds franchise, but that doesn’t mean the game isn’t without a few unique twists.  For one thing, there’s a nice balance of ground based levels and gravity-twisting space levels, borrowing from the series first real sequel, Angry Birds Space.  Switching back and forth between the two as the game progressed gives players a nice change of pace, and a bit more variety than we had expected from a licensed release.

The birds have been given a bit of a makeover as well.  The usual cast of characters has been paired with Star Wars characters, so you’ll see the red bird as Luke Skywalker, the yellow as Han Solo, and so on.  To go with the new Star Wars look, they’ve all been given equally cool Star Wars powers.  For example: The red bird has a lightsaber that can deliver extra damage with a tap of the finger, while the yellow bird has a blaster that cuts through some materials while ricocheting off others (and provides a great new gameplay mechanic as a result).

Little touches like this are a big part of what makes Angry Birds Star Wars such a great offering, especially for die hard Star Wars fans.  In fact, “fan service” are the two words that really sum this game up best.  Rather than simply slapping the Star Wars license onto a popular gaming franchise for a quick cash grab, a lot of thought went into delivering Star Wars fans something they could be proud to call their own.

The game is rife with examples of this, though I suppose the most notable is how the game tells the story of the movie as you move from stage to stage.  As the game begins, you’re on Tatooine.  You’ll encounter Sand People, meet Han, blast off from the Cantina – and when the story moves to space, you’ll be in space.  Expect gravity-based gameplay until you park inside the Death Star.

As for the Angry Birds side of the experience, the new powers and outstanding level design make this the best Angry Birds experience to date.  Those levels are tough though, so be ready for a challenge.  In all of my years of playing Angry Birds, I’ve never given into the temptation to use the Mighty Eagle – but here I found myself using the Star Wars equivalent (the Millennium Falcon) a lot.  Luckily you’ll earn uses of the Falcon as you play, so while I relied on it more than I would have liked, I never felt the need to shell out for an in-app purchase. 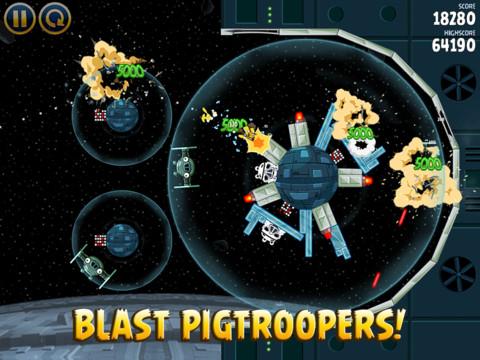 That doesn’t mean the game isn’t without IAP’s, though.  The price of admission, it seems, only covers the first 80 stages.  These stages make up the entire story of the first film, so it’s not like you’re being held back – but there are an additional 40 stages set on Dagobah (the Yoda planet) that you can purchase for $1.99.  These stages are well worth the price, but if you’re the kind of gamer who wants to make one purchase and be done with it, know that Angry Birds Star Wars isn’t that kind of game.

As an Angry Birds game, it’s great.  As a Star Wars tie-in, it’s great.  Overall, Angry Birds Star Wars is everything you were hoping for, and it handily proves skeptics wrong.  I should know – I was amongst them.  After all, who would have thought a marketing mash-up could be this much fun?