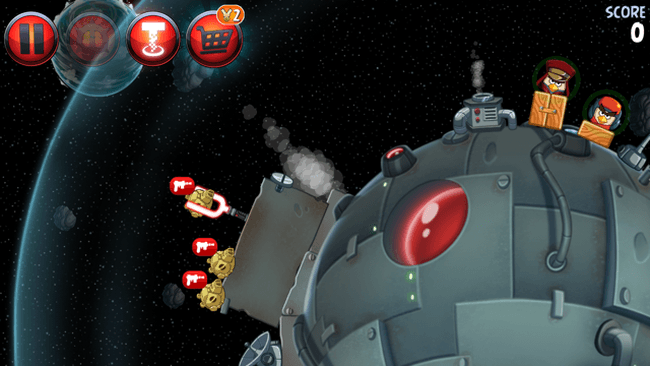 Come to the Dark Side, we have bacon

Rovio has released Angry Birds Star Wars II for mobile phones and tablets. We all knew it was going to happen. It was as inexorable as the final struggle between Luke and Darth Vader. After all, Rovio’s first attempt at fitting Jedi and Sith into suits made of feathers and pigskin proved extremely successful.

So will you enjoy a second go-around with an Angry Birds/Star Wars hybrid? Yes, provided you meet two requirements: one, you’re not thoroughly sick of Angry Birds; and two, you’ve not taken an oath to destroy everything that references the Star Wars prequels. Whereas the first Angry Birds Star Wars revolves around Episodes IV, V, and VI, Angry Birds Star Wars II plucks from Episodes I, II, and III. That means you’ll be goofing off with the likes of Anakin Skywalker and Jar Jar Binks. Sorry.

Each of the birds you work with brings its character’s talent to the table. Qui Gon bird slashes with a lightsaber; Obi-Wan bird uses a Force push (more of a Force shout—these little dudes don’t have hands, after all); Yoda bird performs deadly cartwheels; and Anakin bird bounces all over the place with his pod racer. Believe it or not, Jar Jar bird is awesome. His sticky tongue can latch onto objects, including the pig droids. With Jar Jar’s help, it is wholly possible to kill your enemies with a wrecking ball made out of your enemies. At certain intervals, you’re also invited to join the non-kosher Pork Side of the Force. Finally, you can fling pigs at birds. Rather, you can fling pigs dressed up as Palpatine and Jango Fett. Close enough.

Angry Birds Star Wars II will probably put a doofy grin on your face, even if you decided long ago that you’re fed up with the franchise (ahem). However, some issues occasionally make the game as rocky as a ride through the remnants of Alderaan. Obi Wan’s Force push has extremely short range, making it tricky to execute with precision. And Yoda bird is just pathetic. He looks awesome when he bounces like a little green pinball, but it soon becomes evident that he’s barely capable of ripping through wet paper. As a result, the levels that force you to use him exclusively are frustrating rather than fun.

You’re also prodded about in-app purchases every time you pause the game. Hey! Don’t forget to buy this! And these! Hey! Hey!