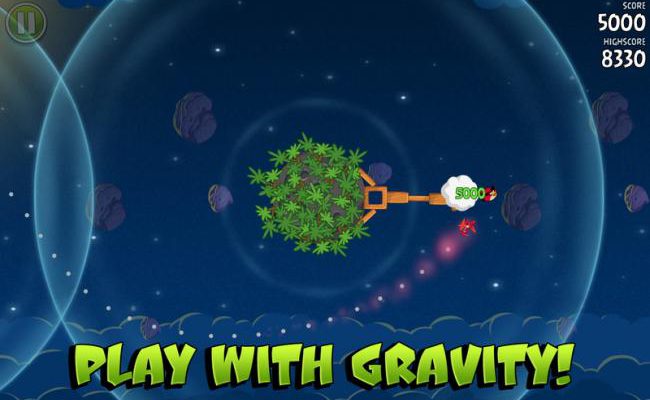 While it probably won’t come as a big surprise to regular readers of the site, we here at Gamezebo have been big fans of Angry Birds since it late 2009 debut. But it’s certainly not the only game we enjoy around here. Another little gem that we never seemed to get enough of was Hemisphere Games’ Osmos. And Angry Birds Space? It plays like a brilliant melding of the two.

As you can probably gather from the title, Angry Birds Space takes everyone’s favorite avian assassins and puts them in, well… space. The pigs are back at it again, although this time they seem to be stealing egg-shaped meteorites rather than eggs, and the birds themselves might not be exactly the same flock we know, but an extraterrestrial equivalent. It’s like Earth-2, but without the role reversal.

As the first true sequel in the Angry Birds franchise (other games in the series like Seasons and Rio are really more spin-offs), there was a lot of pressure for Rovio to try and evolve the gameplay in some truly unique way, giving gamers a completely fresh experience while simultaneously holding on to what people love about the series in the first place. It’s a delicate balance, but it’s one that Angry Birds Space has pulled off with flying colors. So what sets this latest entry apart from its predecessors? Space physics.

Earlier Angry Birds games all took place on earth, and as such, treated gamers to a style of gravity that we’re all used to. Birds go up, birds come down – its science at its most simple. But take those very same birds into space and things get a tad more complicated. With no gravity in the void, any bird you shoot will continue in a straight line unless it crashes into another object, causing it to veer. But what if you get close to a planetoid and get caught up in its gravity? It’s this manipulation of gravity vs zero gravity that gives Angry Birds Space its unique appeal. 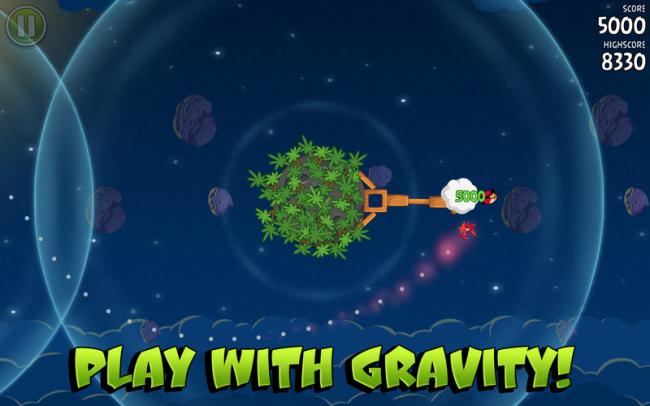 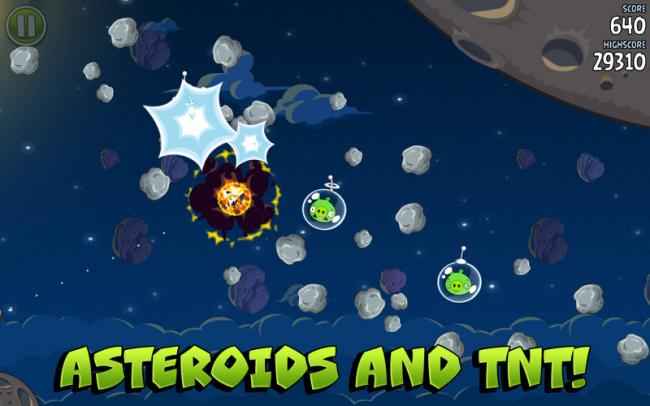 The stages themselves use this mix in varying ways, meaning the levels here have a bit more variety to them than what we’ve previously seen in an Angry Birds game. In some stages you’ll have to navigate through the gravity wells of multiple asteroids to reach your target. In others you’ll attack pigs that are floating in space, hoping to send them crashing into the orbit of the planet below. In others still, you’ll play a more traditional game of Angry Birds on a planet’s surface, but with the threat of sending a bird hurtling into the cosmos always hanging over your head.

The game also adds in a few other nice hooks, like boss fights and new birds, but in the end it’s hard to shake the feeling that this is just more Angry Birds with one new (albeit major and unique) twist in the mix. If you were expecting a game that mixes familiar characters with unfamiliar gameplay, you’re not going to find it here. Not that this is necessarily a bad thing – the Angry Birds formula is a billion-seller for a reason, and if they’d gone with Angry Birds Kart Racing or some such, I’m sure we’d all be up in arms over it.

As far as sequels go, Angry Birds Space straddles that fine line between familiarity and progress exceptionally well – but there’s no question that it leans more in the direction of the former than the latter. If you’re already a fan of the series (and who isn’t?), picking up Rovio’s latest release is a no brainer. Consider this the most fun you’ll have with pigs in space since… well… Pigs in Space.