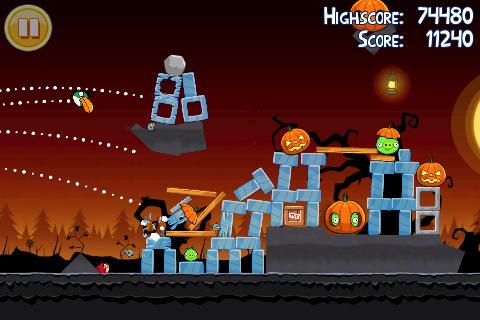 You could spend the next few minutes reading through our lengthy review – and believe me, we’d prefer it if you did – but if you’ve ever played the original, then you’ll know exactly what to expect just by reading the title. Angry Birds Halloween is little more than Angry Birds with a spooky coat of paint.

It’s not the exact same game, mind you – the 45 levels here are completely original and have never appeared anywhere before – but if you’re a fan of Angry Birds, you’ll find that this special edition is an incredibly familiar experience. Depending on your point of you, this can be a good thing or a bad thing.

If you haven’t played Angry Birds before, the general idea is this: players will slingshot a variety of birds with different abilities into a structure that’s hiding pigs. Destroy all of the pigs with the birds provided and you’ll advance to the next level. Simple enough, no?

With a spooky background, eerie music, and costumed pigs to smash, the game has definitely fulfilled the requirements for adding the word “Halloween” to their title. In addition to the regular pig targets, players can also try to smash pumpkins for extra points. It’s a little touch, but it certain adds to the seasonal theme.

As the first standalone Angry Birds expansion – and more specifically, the first piece of additional content that we’ve been asked to pay money for – we would have liked to have seen something more than a thin coat of Halloween paint. A level editor, a spin-off with a different gameplay mechanic – anything other than more of the same would have been a welcome change of pace. Instead, Angry Birds Halloween ends up feeling like a few content updates bundled together with a seasonal theme slapped on the front for a quick cash grab.

Still, that’s not to say the 45 new levels aren’t fun. In fact, they’re supremely challenging right from the get go thanks to some exceptional level design. If you’re new to Angry Birds, you might find these to be a little too hard to tackle at first. Once you get the hang of it though, you can really appreciate the artistry that’s gone in to each of these challenges.

If you’re already a fan of Angry Birds – and who isn’t? – you’re going to enjoy playing through these 45 levels immensely. Just don’t expect anything new here. Angry Birds Halloween is all treat, no tricks – and it could have really used a few new tricks.