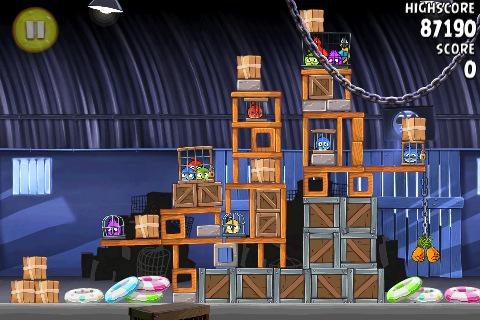 When developer Rovio first announced a partnership with 20th Century Fox to put out a special edition of Angry Birds to tie-in with the upcoming film Rio, we were a little curious about what that might mean. Would it be Angry Birds gameplay with Rio characters? Would the two worlds come together somehow? And what of the pigs? Now that Angry Birds Rio has finally arrived, our questions have been answered.

The third instalment in the Angry Birds franchise (if you don’t count the series endless supply of free updates), Angry Birds Rio inserts the characters from Angry Birds into the plot of Rio, a film about two blue macaws who are birdnapped and need to make an escape. The gameplay remains largely the same, with players putting some familiar feathered friends into a slingshot and aiming them at structures in order to kill pigs and complete the level. The only real difference is that instead of pigs you’ll be freeing caged birds and taking out monkeys.

Well, maybe that’s not the only difference…

The gameplay changes are nothing earth-shattering, but still, Angry Birds Rio marks the first time developer Rovio has started to make some genuine additions to their formula. For example, players in Rio now have to contend with obstacles and objectives that swing and sway, rather than just constructions that crumble on impact. On the hindering side of this equation are hanging lamps that will veer your bird off course should you make contact with them. On the helpful side are chains that support platforms – break one chain and gravity will cause the platform below to swing around on the chain that remains, hopefully knocking down all of the targets in its reach.

Players will also have the ability to bounce around a bit, courtesy of inflatable rubber rings lying on the ground (these are replaced by equally bouncy mushrooms in the second chapter). As we’ve said, these aren’t major additions – but they didn’t have to be. They’re a great fit for the series, and at the end of the day that’s all that matters.

The animations have been kicked up a minor notch as well. Little monkeys scurry about in fear as they scramble to keep their balance when falling to their doom. Birds fly out of their cages with wings flapping wildly. The cosmetic tweaks may not have amounted to much, but if you’ve got an eye for detail you’ll appreciated the little added touches that have gone into this latest Angry Birds release. 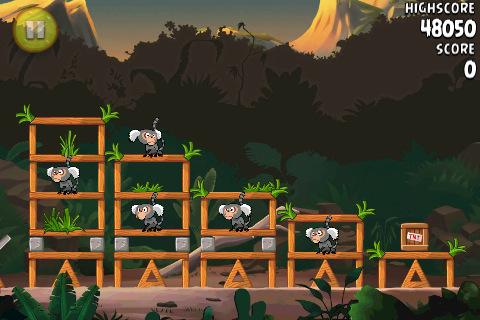 The only major addition that may ruffle some feathers is the inclusion of a boss fight at the end of the second chapter. Players will need to take out a bad white birdie (no doubt a villain of some sort in the film) that flies up and down on the screen. To defeat him, you’ll need to damage him several times using several birds. The first birds you’ll use in this fight will be the pair of blue macaws from the film. They’re fun to use (after launching, you tap to shoot them straight across the screen), but you’ll only get to use them once, and only during this final level. What’s more, you can’t really see where the white bird is while aiming, so finishing the fight is a real hit or miss proposition. Despite this, it’s an easy fight that most will be able to complete on their first attempt, making the whole event a little anti-climactic.

The developers are teasing additional chapters coming down the road, so it looks like Angry Birds Rio will receive the same continued support that other games in the Angry Birds series have. Hopefully this means we’ll get to use the fun new blue macaws a little more too.

For the most part, Angry Birds Rio is completely in keeping with the Angry Birds releases of the past. Still – unlike Angry Birds Seasons, Rio is starting to make changes that go beyond the cosmetic. They’re baby steps to be sure, but they haven’t gone unnoticed. As popular as the series it, some evolution needs to happen if it wants to have the long term staying power of a Mario or a Pac-Man. In Rio, we’re starting to see the first glimmer of that evolution.