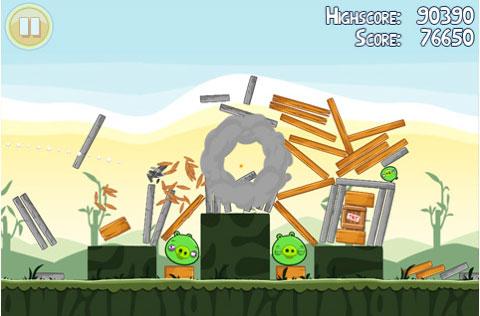 LOL. You type it out, but how often do you actually mean it? Fire up Angry Birds, and if there isn’t a real life laugh-out-loud happening as you fling your first fast-flying fowl, then you need surgery on your funny bone.

So why are these birds so angry? The single-screen cutscene – with accompanying adorable tune – tells us everything. The evil pigs have stolen the birds’ eggs, and the birds are out to get them back. And they’re getting them back the only way they know how: by flinging themselves at the pigs’ strongholds in a giant slighshot, destroying them and crushing the pigs until they disappear in a puff of smoke. Sure, it sounds kind of gruesome when you read it, but it’s all Looney Tunes, tongue-in-cheek slapstick.

The first guaranteed LOL is from the amazing sound design. Each bird has a unique hilarious battlecry, and the other birds screech nearby… ahem, egging them on. The smashing, crashing and banging as the birds bash into the structures adds to the humor. Though there’s no music, it doesn’t matter. This is definitely a case of less is more.

The graphics are equally fun. Each of the five bird types is uniquely drawn, with lots of character and detail. Colors pop, and the cartoon world feels alive and fun.

But gameplay is king, and it really soars here. Reminiscent of Boom Blox on the Wii, everything is physics-based. As you launch the fliers at the targets, they shatter boards that cause the the rest of the structure to collapse. There are, of course, different kinds of materials, like wood, ice or rocks. Each either breaks differently, or requires a specific bird to break them.

As mentioned, there are five bird types, each with a different attack. Red birds fly straight at the target, while gray birds will split into three smaller birds when tapped. Yellow birds will accelerate when tapped, black birds will explode and white birds drop egg bombs on the structures. Each level starts with a finite number of specific birds and bird types. The fewer you use, the higher the score. As long as you crush the pigs before using up your pre-determined arsenal, you beat the level. However, using fewer birds and causing greater destruction will net you a higher star rating (from one to three stars), giving the game lots of replay value. 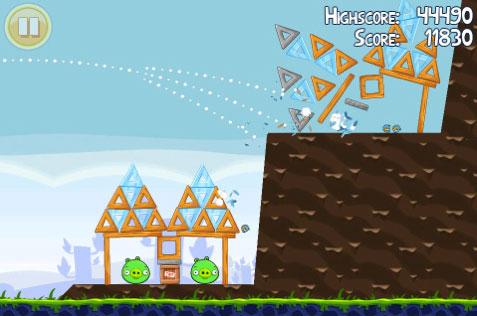 Before you even begin replaying the game a second time, there’s a lot of game to play the first time around. Angry Birds features 105 levels to play, with lots of variety in the level design. However, there were a few sudden difficulty spikes, making for a few slightly frustrating moments. The game’s light-hearted nature (or maybe I was just empathizing with my on-screen birdie bretheren) and humor will carry you through.

If Angry Birds has flaws, they are slight. First is that there are no real tutorials. While the main gameplay doesn’t really require them – launching a bird is nothing more than dragging your finger behind the slingshot and letting them go – some of the finer points would have been nice. For instance, the game never tells you that you can pinch to zoom. While this is a familiar iPhone or iPod Touch gesture, expressly saying to do it would be helpful. However, when a new bird type is introduced, the single-panel image explaining its function serves quite well.

The biggest problem is the online portion. If you want to participate in the leaderboards, you must sign up to a service called Crystal. While you can log in as a guest, you won’t be able to find friends or post worldwide. It’s a shame it can’t just be integrated into the game itself.

Again, these problems are very slight. Angry Birds is, bang for the buck, one of the best games on the iPhone right now. Solid physics gameplay mixed with honest laugh-out-loud moments makes Angry Birds soar high above the crowd. And yes, it’s okay to laugh when the birds crash.