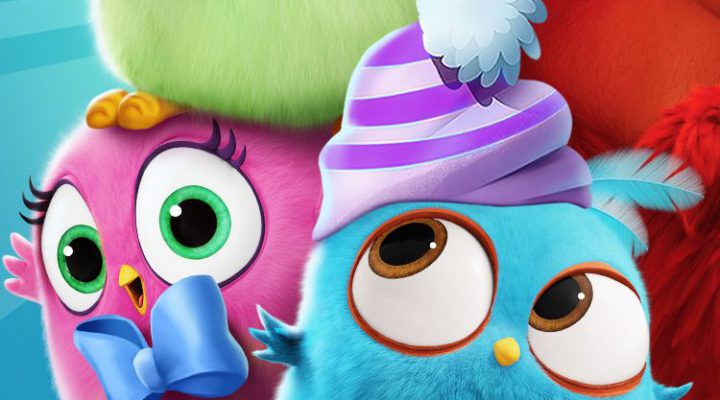 How quaint! In a throwback to game trends from 2013, Rovio has released a match-3 featuring their popular Angry Birds, along with the undeniably adorable Hatchlings. I’m a fan of Rovio and I even enjoyed their more risky match-3 Nibblers which launched a whole new cast of charming oceanic characters. However, Angry Birds Match is a cynical offering in a bloated genre that needs much more than some standard power-ups and cute collectibles chicks to make it engaging. 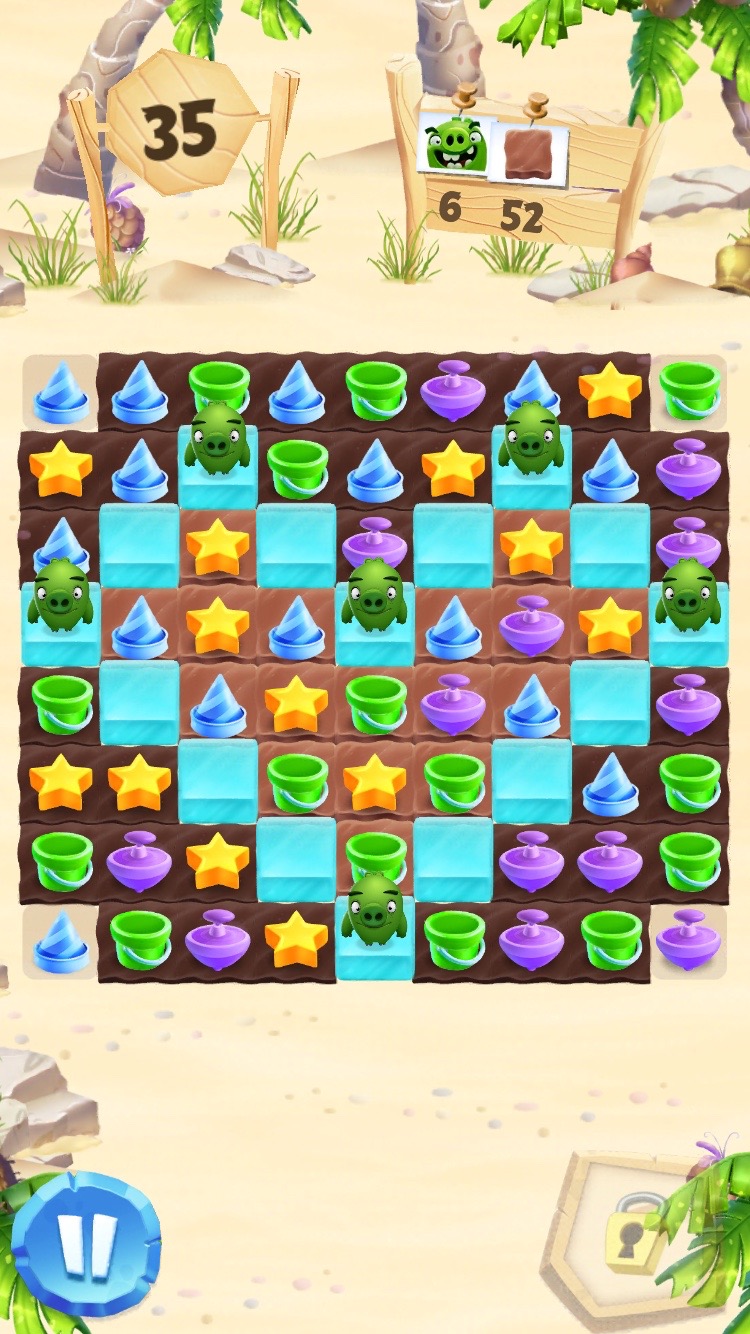 If you are a hardcore match-3 fan (still) or maybe brand new to the genre, you’ll find Angry Birds Match hits all the standard marks. Match sets of four or five items to spawn Red who clears one row, Chuck who clears an intersecting row and column, or Bomb who clears three rows. Levels will include different challenges such as clearing pigs, glue or mud and collecting specific numbers of items like popsicles and cake. Sadly, the items that you swipe to match don’t even feel cohesive. In some puzzles there are stars and buckets, some have mud and balls, some aren’t even identifiable (what is that tack-like shape?).  It feels like the random mix is meant to keep you interested, but there isn’t a clear theme to make the levels feel like they are part of a world. 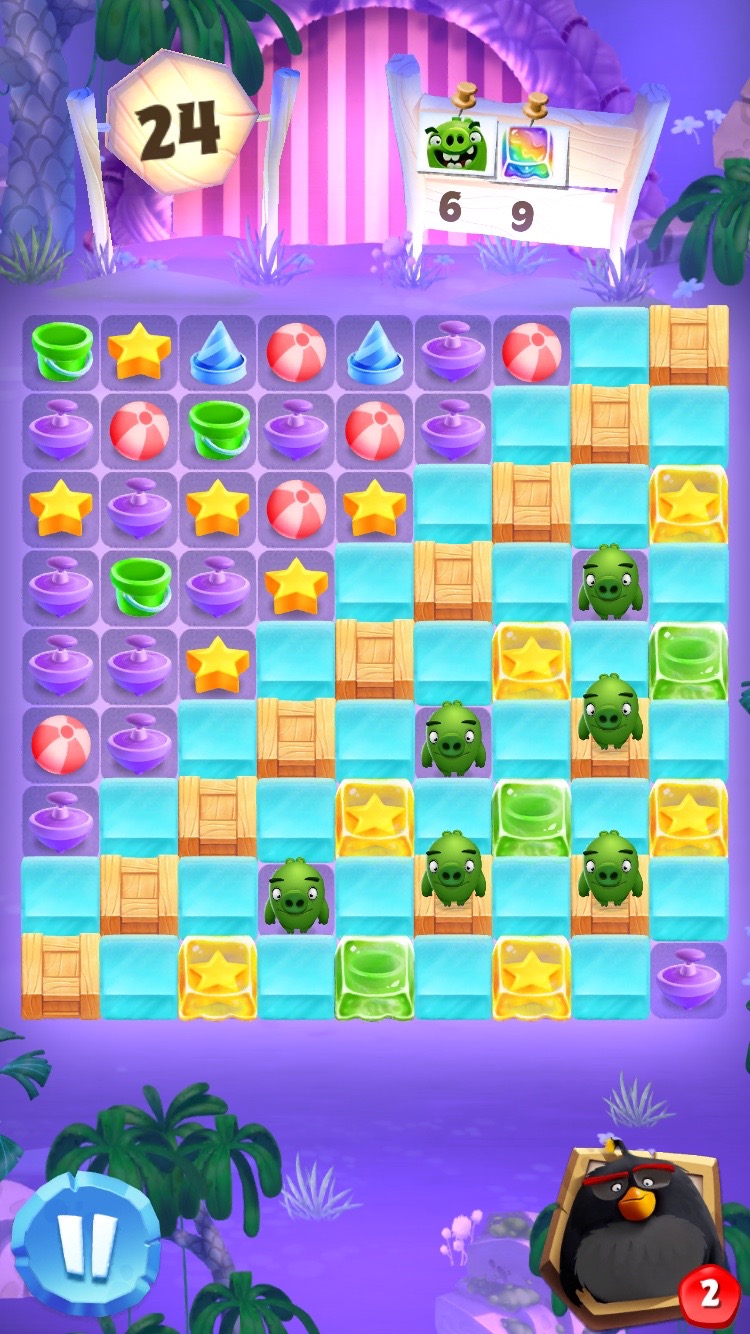 Unlike other games of this type where you must move through different worlds on a map, Angry Bird Match relies on their cutest characters The Hatchlings, to motivate continued gameplay. Levels are broken up by scenes such as a beach party or a dance party and as you advance through puzzles, you collect different Hatchlings to “invite” to whatever scene you’re currently occupying. By the second scene (the dance party), you must complete several puzzles to unlock your next invitee. The scenes are purely visual with no interactivity; tapping doesn’t produce conversation bubbles and there are no triggered effects. This feels like a missed opportunity. 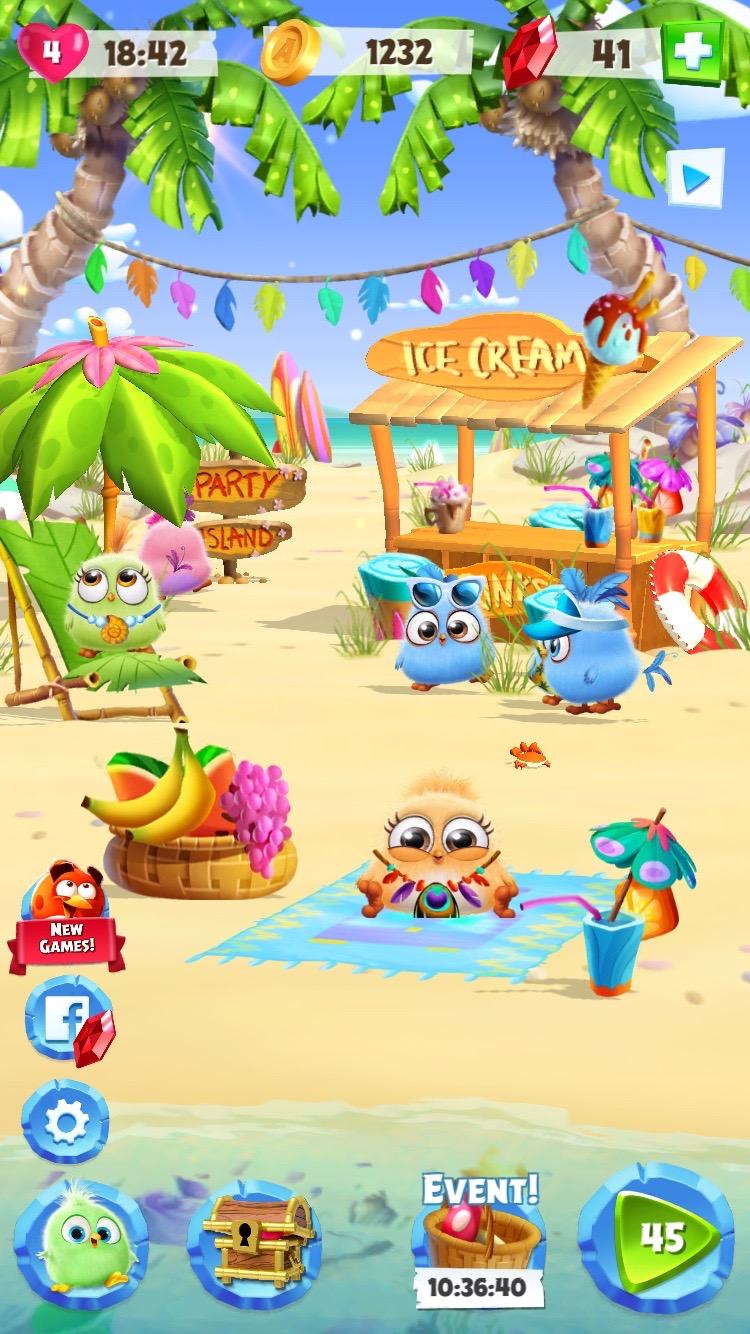 Along with inviting the baby birds to your event,  you can also dress them with little accessories such as silly necklaces or festive shirts. The first accessory is free and additional accessories can be purchased with gold coins or by opening chests. Birds can only wear one accessory at a time, and the only benefit to adding accessories is that you earn a pittance of a coin bonus (+1 coin) when you complete a level. Unlike Angry Birds Fight where accessories actually help your performance, these are purely superficial.

The economy is exactly what you’d expect. Earn gold coins by completing a puzzle efficiently and open surprise chests to earn prizes like power ups to start the level with birds, or red gems to continue a level. You start with five lives and if you are unable to meet all the goals of a level, then you’ll lose a life. Lives refill over time, or you can purchase refills with gems.

Ultimately, Angry Birds Match is near replica of just about every other basic match-3 game, offering very little beyond a nominal collection mechanic. To successfully contribute a new entry to the overcrowded match-3 space, there must be something special about the mechanics, the characters, the environments, or the extra features. Rovio has skimped on all of that to produce a glorified rehash with some cute baby birds. However, if you’re desperate for some “new” match-3 action and are a fan of the Angry Birds aesthetic, then you may find something you like here.