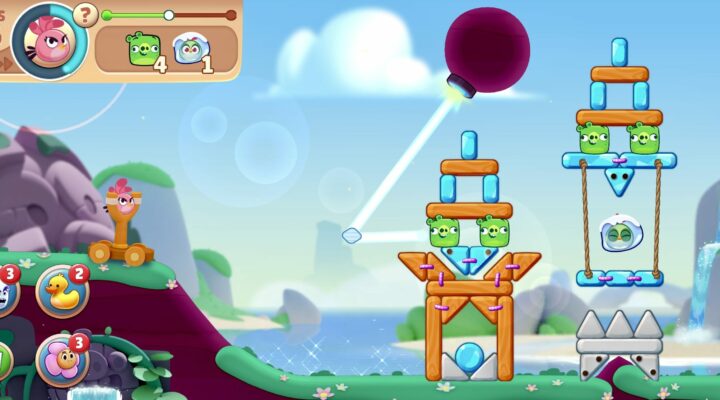 Angry Birds Journey takes the shape of the early games in the series, then wraps it into a quick-fire blast of bird-flinging entertainment. It isn’t without its problems, but there’s an addictive rhythm to proceedings that makes this one hard to put down.

Each level is split into a series of smaller chunks. You’re still dragging back a slingshot to fire birds into rickety, pig-infested constructions, but you don’t have to destroy everything. Instead, you’re trying to hit quotas. Kill all the pigs, release all the fledglings, that sort of thing.

When you clear one structure, you move onto the next. You’ve got a set number of birds for each level, as well as some special powers that you can unlock and unleash if you get into trouble.

There’s an angry meter as well. When you’ve smashed enough blocks you can power up your next bird to do even more damage. The birds all have different skills, from exploding on contact to scooping up piles of blocks and pigs and tossing them aside. You can’t choose the bird you’re using – you have to make do with what you’re given.

There are various other events and rewards going on in the background as well. You’ll play a few levels, get a bunch of stuff, then play a few more levels and get a bunch more. It’s a shallow experience, for sure, but it’s got that moreish drive of the sweetest snacks.

While it doesn’t reach the heights of the series at its best, Angry Birds Journey is a decent diversion that will suck you in with its gregarious bounce. It doesn’t reinvent the wheel – you could argue it deinvents it – but it’s a sugary mobile blast of dopamine hits, and it achieves exactly what it sets out to do.