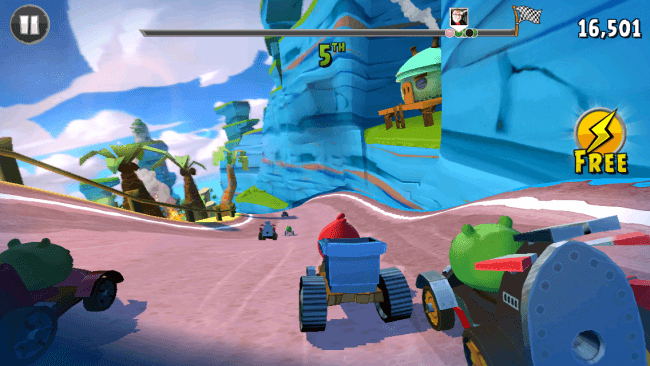 This racer could use a pit stop

Angry Birds helped us fall in love with the physics of speed all over again. Bad Piggies taught us how much fun could be had with pigs on wheels. With titles like these in the series past, I suppose an Angry Birds kart racer was inevitable.

But while thematically a fit, Angry Birds Go! is a pretty big break from what Rovio has brought us in the past. It’s their first game with 3D modelling. It’s their first game in an established genre that the console crowd would get eager about. It is, as much as can be for one of the biggest names in mobile gaming, something of a gamble. And while I’ve been having a lot of fun with it, I don’t think it quite hits the high mark that Rovio might have hoped.

At the start of every race, players will pull back on their slingshot (a nice nod to the original game) and shoot their racer onto the track. From there the game becomes an exercise in overly-simplified design. Player don’t need to worry about braking or accelerating. Drifting isn’t (much of) a thing. There are no item boxes to break, and in many of the game’s challenges, not even other racers to compete against. In all honesty, the game could have been called Angry Birds: Steering isn’t too much for you, is it? If so, we’re really sorry and will take it out in a future update.

That’s not to say the steering – and the game itself – isn’t fun. The tracks are incredibly well designed, and you’ll get to race on them over and over again in different challenges. In fact, you’ll have little choice. To unlock each track, you’ll need to complete five different game modes on the same track first: a standard race against AI opponents, a race against the clock, a race where you smash fruit, a duel, and a second duel to unlock a new racer and track.

The tracks themselves are fairly short, and you’ll only do a single lap in each challenge. Even so, things do begin to feel a bit repetitive – especially if you have to go back to a previous track to grind to earn currency so that you can upgrade your hoopty to raise its “cc” rating high enough to participate in certain events.

The game also suffers from a pretty uninviting energy system. Each bird has five points of energy, and every race – win or lose – uses up one. After that they’ll head back to their nest to rest. You can always give them full energy again if you want to shell out for premium currency, but most folks will just have to put the game down and wait until it refills… at 20 minutes per point. The more birds you unlock, the less this becomes a problem – but it’s still kind of shocking to see such an annoying limitation put in place – especially one that punishes newer players more than those who stick with the game.

This isn’t the only place that in-app greediness rears its ugly head, either. Unlike most kart racers where you can use cool special items by running over them on the track, each racer in Angry Birds Go! has their own unique power-up. The first time you use your power-up in a race is free. Subsequent uses, however, cost premium currency. That makes power-ups a very “one and done” affair for those without deep wallets.

And don’t even get me started on the few unique modifiers that are offered on occasion courtesy of companies like State Farm or Goldfish Crackers. Or the crazy nice buggies that you can buy for $50 in-app purchases. And did I mention that they don’t even list the price in the game? You have to click “buy” to be prompted to confirm your App Store purchase to find out.

Angry Birds Go! is a game that looks great and plays well, but it’s hampered by design flaws; both in its monetization and its attempts to make kart-racing idiot-proof. The problem, though, is that kart-racing has always been idiot-proof. By stripping out so much of what works in kart racing games, Angry Birds Go! fails to capture the same heart and passion of its competitors.

Angry Birds Go! is a good game. It’s just not the great game it could have been.