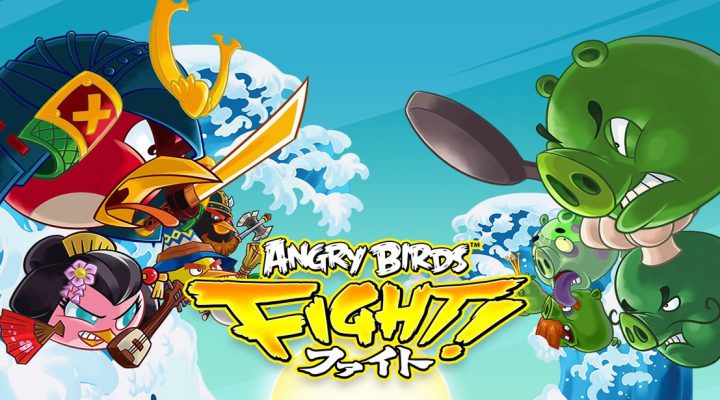 The eleventh installment of the Angry Birds franchise brings us Angry Birds Fight!, a match-3 battle game with real-time PvP gameplay and RPG elements. I appreciate hybrid game genres; and as a fan of Angry Birds, match-3s and RPGs alike, I was ready to take flight with Rovio’s latest.

You play as one of the well-known birds and, during the tutorial or boss fights, you’ll be matched against the infamous pigs. But the majority of battles take place against randomly chosen avian players on a match-3 game board where you earn power and defense boosts based on your matches. Match panels in combinations of 4 or more to trigger special skills and “sabotage” your opponent’s own match-3 playing. 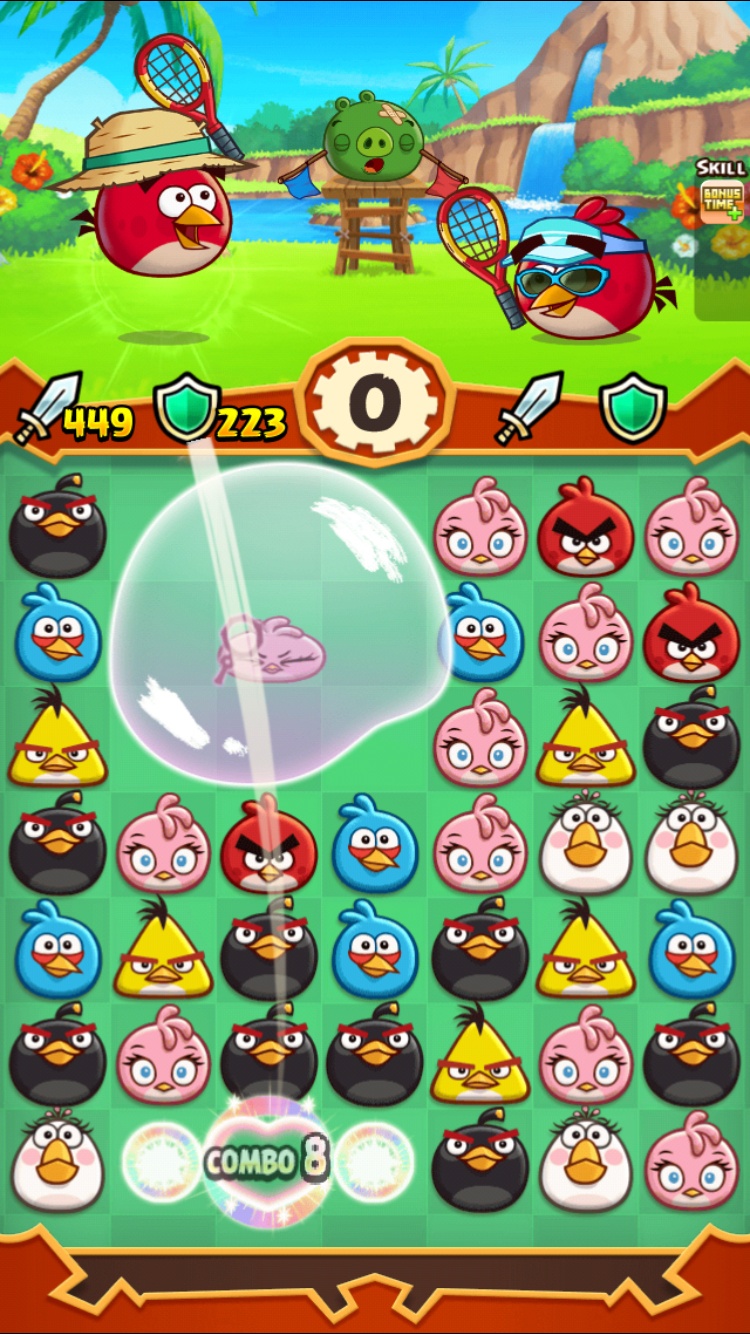 During the enjoyable match-3 showdowns, I could see my points accumulating and my combos serving up some fancy effects. While I made my combos, my chosen bird and that of my opponent were simply bouncing happily at the top of the screen, waiting to fight. Occasionally an opponent would score a sabotaging combo and I would be derailed by boxes in the way or bubbles blocking my view of the board. A countdown timer kept the pressure on and, once time had elapsed, my opponent and I actually began fighting.

It was at this moment that I experienced my first Fight! disappointment: I had no control over the actual fighting action. 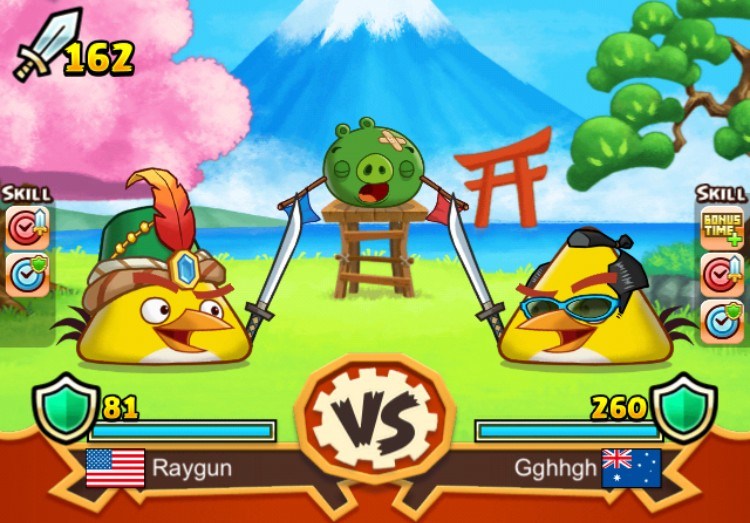 After the pressure of the match-3 blitz, I was forced to simply watch and wait while the birds fought one another in a cut scene where I had no control over the combat. The match-3 actions I had taken on the board didn’t seem to influence the fighting tactics in any way, except to determine how quickly the health meters were depleted. I had to hope my ridiculous hat was powerful enough to protect me, that my frying pan was strong enough to do damage and that ultimately I’d survive with a higher health score than my opponent.

The ability to effect change on an existing system is a cornerstone of Angry Birds gameplay; but I was left feeling quite powerless and dissatisfied watching what felt like a predetermined battle well out of my control. What’s more, after speaking with other players behind-the-scenes at Gamezebo, there seems to be a general consensus about the battle system itself — the game just isn’t clear on how it all works.

If you win the battle you’ll earn a prize, but if you lose your only recourse is to try to get stronger through your gear (though you won’t even be matched with that opponent again). Enter my second Fight! disappointment: the RPG-style item customization brings very little value. 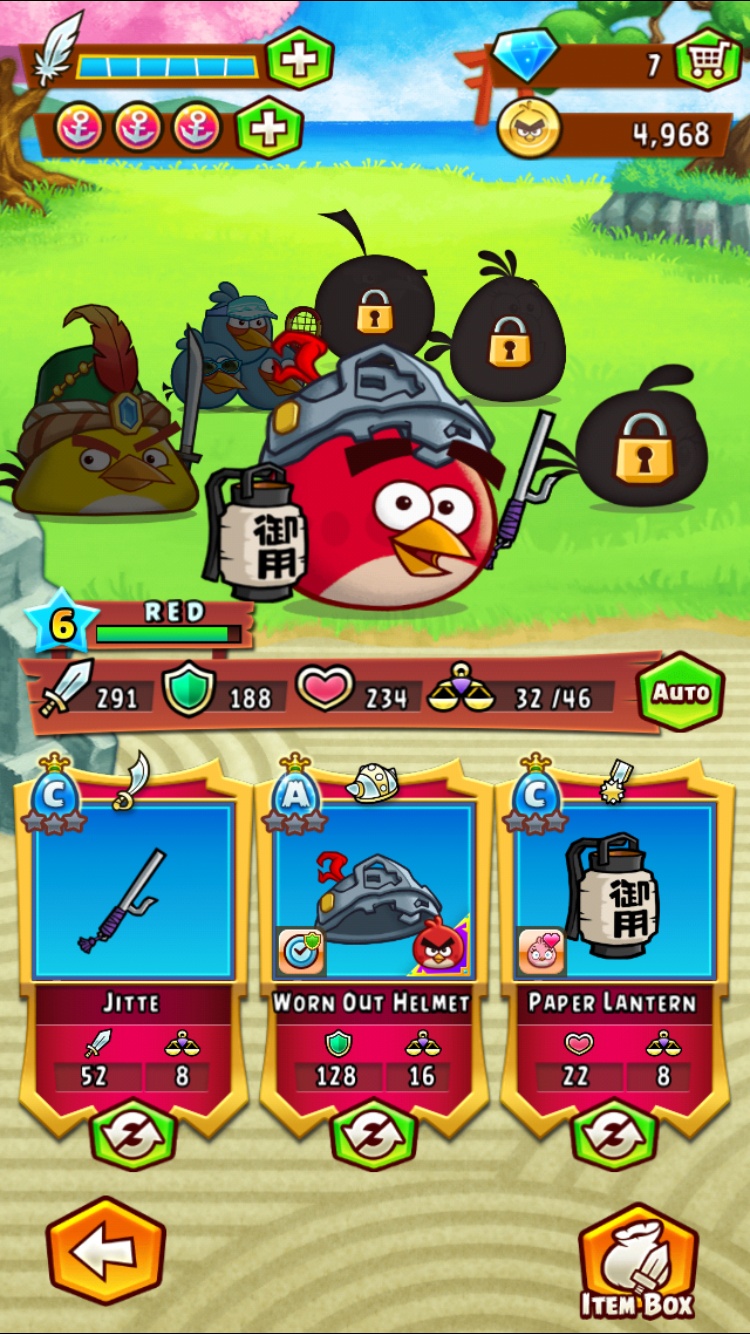 Item customization provides an opportunity for a player to invest in their character. However, having received four dopey sun visors from successful battles, I had little to invest in. The whole gear system is unnecessarily complex and clunky, requiring nested menus and multiple windows to be opened and closed. Items can’t be fused, but can be enhanced for gold coins. I just couldn’t get that excited about upgrading that lame visor when I saw some of my opponents’ sweet gear.

Predictably, the coolest gear comes from the hard currency slot sink — the Mighty Eagle’s treasure chest where you have a chance at some wacky items. But once you get something really fun or fancy, the value of the rest of the gear drops are dramatically thrown off. On my free slot try (first one’s always free), I was excited to get a bejeweled “Arabia Hat.” But that hat was ten times stronger than anything else I had, so it ultimately rendered all of my previously earned gear useless. There was just no point in enhancing any of the other items. I felt, once again, pretty powerless and dissatisfied — though royally festooned in my new hat. 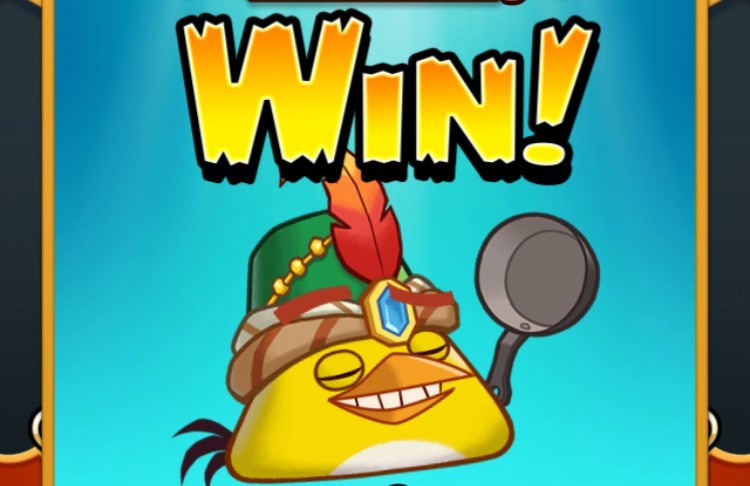 Fight! utilizes a double energy system- one for PvP battles and one for boss challenges- which may drain your interest or your pocket if you aren’t willing to wait. But since the game lacked the addictive stickiness of sweeter match-3 games, I felt very little pressure when I ran out of energy.

Because Angry Birds Fight! is free to play, it’s worth the download for a match-3 or Angry Birds fan. But if you’re looking for a truly addictive PvP battle, don’t put all your eggs in this basket.