Home / Reviews / Angry Birds Blast Review: Up in the Air 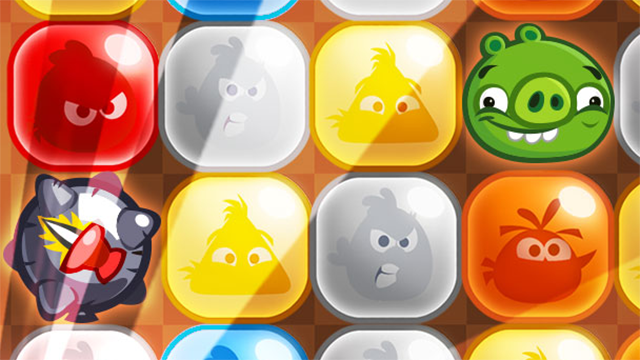 Plenty of polished balloon-popping levels with appearances from the Birds we love (and Piggies we love to hate).

Taking down the Piggies' forts and Pigs themselves mid-matching level is a great variation on a classic Angry Birds format.

Lots of thoughtful player concessions, like life-sharing with fake friends in case you don't want to connect to Facebook as well as offline play.

Most of the non-Pig levels and obstacles feel like any other puzzle game, but lack the variety that some other match-3 games have achieved.

At this point, seven years since their debut, the Angry Birds have taken part in almost every video game genre imaginable. Their main series may focus on physics-based demolition, but spin-offs have seen them tackle everything from RPGs to racing, with even their antagonistic Piggies getting a chance to use their construction skills for something other than egg-nabbing. The famous fowl have dabbled in the tile matching genre before with Zookeeper Battle-esque match-3 multiplayer duels in Angry Birds Fight! and bubble-shooting matches in Angry Birds POP! Angry Birds Blast is, however, their first foray into the group-matching genre, so this is still new territory for them. And like so many of their other one-off, side project pursuits, puzzle board matching fits the Angry Birds quite well.

Blast pits the original five Angry Birds—Red (aka Red), Yellow (Chuck), White (Matilda), Black (Bomb), and Blue (Jay, Jake, and Jim) plus the more recently introduced Orange bird (Bubbles) against their easily recognizable enemies, the Green Pigs. The Pigs have built their usual wood-and-glass forts for protection, but in this game, the Birds have been trapped inside balloons and must be freed before they can take down any Piggy defenses. 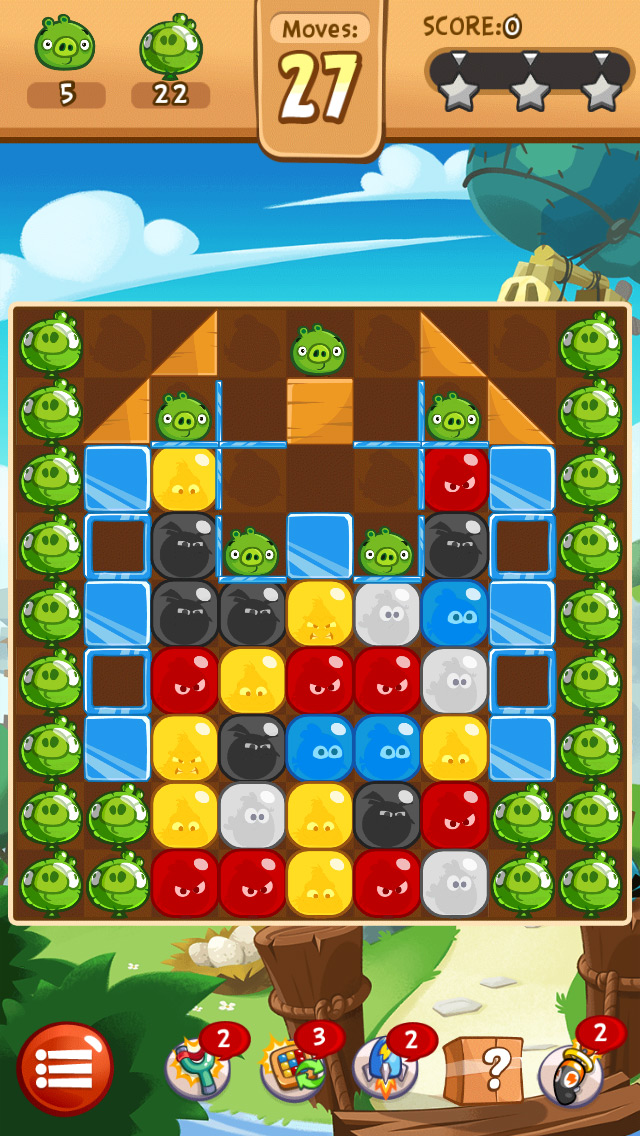 To free the Birds, players will need to make matches of two or more same-colored balloons. Unlike the more common Bejeweled-style of match-3 we saw in Angry Birds Fight!, Blast uses bunch matching à la the Collapse! series, where tiles are only removed when you tap them and any like-colored tiles that are touching the group will be removed. This allows for very large matches in a single turn but also greatly reduces the opportunity for chains, since tiles don’t disappear automatically when lined up in a row.

To help make up for this, Rovio has included “super angry” Birds that will torpedo out of their prison and pop another random balloon once freed. There are also a number of powerful boosters that will appear when you collect larger batches of balloons—such as the 5-match Rocket or the 9-match Laser Gun—which have unique blast radii to help you snag tricky singular balloons. If two of these boosters end up side-by-side, the resulting explosion is massive in scope and usefulness. The result is still not quite as satisfying as a lengthy Bejeweled chain that just keeps going, but it’s still rewarding to see all the balloons burst at once. 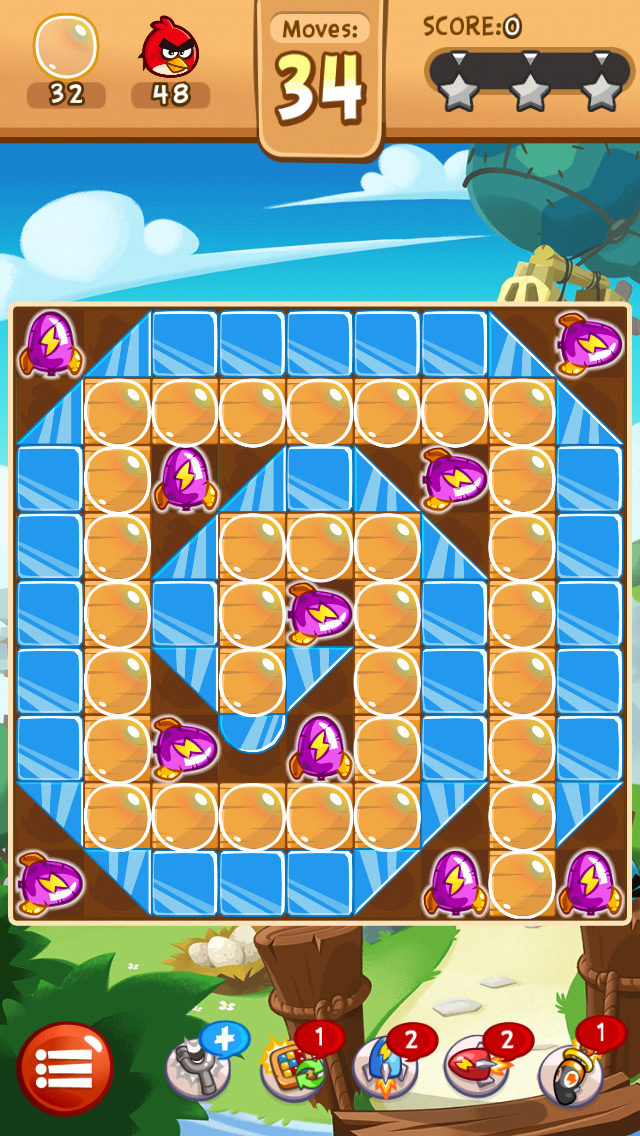 The individual level goals in Angry Birds Blast will be familiar to anyone with match-3 experience: they range from collecting a certain number of specific Birds (30 Red, 20 Yellow, etc.) to getting hot air balloons from the bottom of the board to the top. Piggies do show up often in their makeshift fortresses, surrounded by glass, wood, and the occasional stone block, all of which can be slowly broken down by making matches nearby. Goals almost always include removing any Pigs on the board, and larger Piggies—like the Foreman Pig—take more matches to be knocked off. To help with the trickiest levels, consumable items can be purchased and activated which will add more moves to your total count, provide a free Laser Gun, rotate the entire board, and so on.

Although many aspects of Angry Birds Blast are tried and true formulas of the genre, the use of Piggies and their forts as obstacles is a great change of pace that stays true to the series’ identity. And the sheer polish and charm of the game makes it easy to be reenchanted by things you may have done before. Even trapped inside their balloons, the Angry Birds’ personalities shine through, with Red’s thick eyebrows ever-scowling, Matilda’s underbite clenching, and Chuck’s wisp of hair looking like a volcano about to go off. The map is filled with adorable details like the Bad Piggies playing volleyball, a giant Mighty Eagle statue, and hatchlings waiting to be rescued. There are also little gameplay additions we love, like the ability to send and receive lives from stand-in friends for those of us who choose not to connect to Facebook; the option to watch an ad and get an extra booster when retrying a tough level; and the Daily/Weekly tasks that offer a unique “go as long as you can” challenge and a break from the standard goal-focused levels. 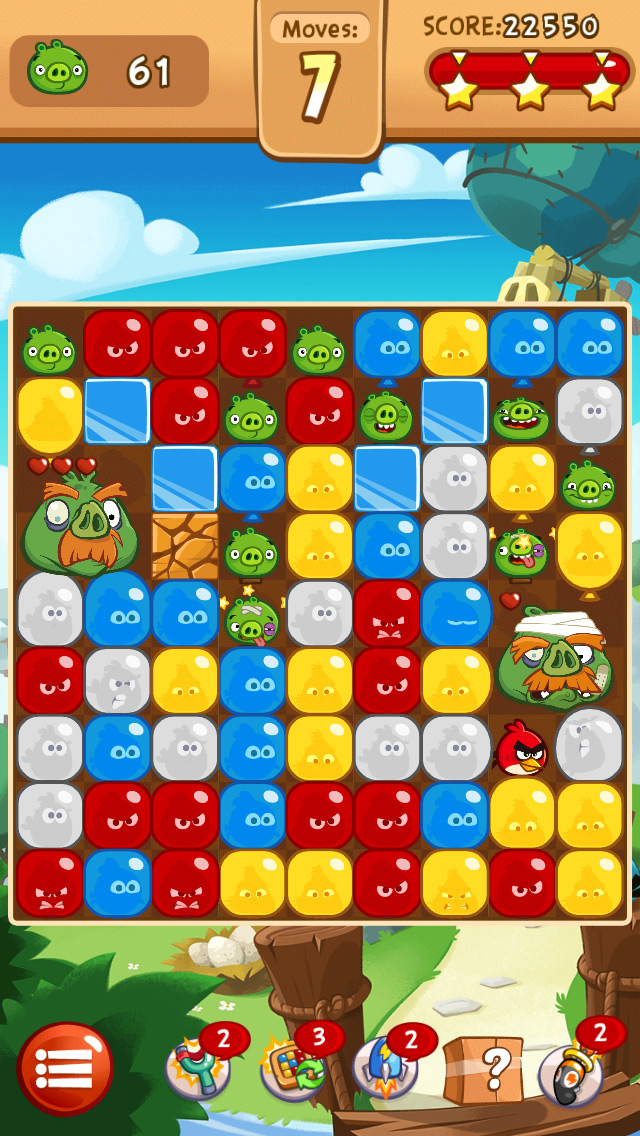 Despite the charm of the Birds themselves and the thoughtful gameplay additions, Rovio has left some areas a bit barebones in comparison to other games in the series. The plot is entirely nonexistent, without even a mention of why the Birds are trapped inside balloons. Of course it’s safe to assume the Pigs are behind it, but we don’t get so much as a dialogue box explaining this. Considering even the very first Angry Birds had cute comic panels between worlds to offer some sort of story and motivation, the lack of any narrative at all is a bit jarring.

There’s also a lack of variety in the power-ups and obstacles themselves. Almost every hazard you unlock comes with the same solution of “match balloons next to it to remove it.” We are only 50 levels in out of the current 250, but we’ve yet to see anything really clever like the rainbow wheels in Futurama: Game of Drones or the flower boxes in Gardenscapes: New Acres. There’s also very little Bird power, as well: although the “super angry” Birds you save will hang out on the board until they can be of use, all of the power-ups are simple inanimate objects. Using a supercharged Black Bird as the Bomb power-up or the Yellow Bird as the Rocket would have given the game even more of an Angry Birds feel and helped differentiate it from the many others in the genre that have come before. 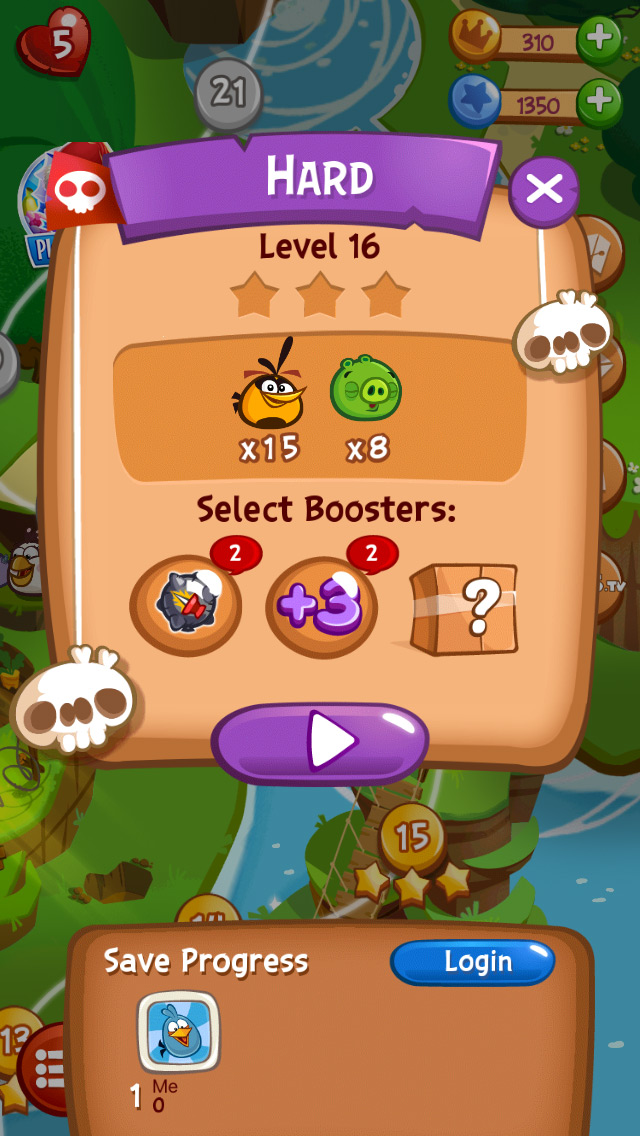 But the biggest problem with Blast is something that often plagues other free-to-play matching games as well: it becomes too difficult too quickly. Although the power-ups we mentioned above do help in clearing tough boards, we still found ourselves playing even fairly early levels over and over before coming close to the required goals. A rewarding challenge is appreciated, but Blast often feels random and luck-based, especially when you get stuck with an endless series of matches in a corner that are nowhere near the Pigs you’re trying to take out. We’ve found that if you’re able to complete a level you’ll almost always earn three stars, which indicates that the victory conditions may be set too high if barely scrapping by still hits the top score.

When you do manage to eke out a victory, however, and balloons are popping, Birds flying, and Pigs falling over, Angry Birds Blast is true to its name. It has much of the Pig-bashing and Bird-saving excitement we look for in our Angry Birds games, wrapped in the joy of puzzle-matching with dynamic power-ups. Although it sometimes feels too generic and like it missed out on some Angry Birds-specific thematic opportunities, we still consider this yet another bullet on the Birds’ long list of successful avian excursions and human diversions.