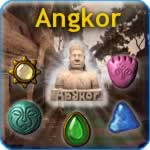 Despite being one of the most exotic and storied destinations on Earth, southeast Asia has yet to enjoy time in the limelight as the setting for any major casual game release.

Here to finally fix the problem is Angkor, a pattern-matching puzzler which uses attractive imagery and catchy remixes of native melodies to bring the region to life right on your very own desktop.

Although largely derivative and a great deal more challenging than most "match three" challenges, it’s nevertheless worth a peek, especially for those who consider most similarly-styled outings a breeze.

The setup’s the same as ever: Two game modes, Classic (in which you race against a ticking clock to complete stages) and Timeless, are offered at the get-go. Once a particular variant’s been selected – note that we recommend the former option for its deeper play – it’s off to the main map you’ll head.

No major storyline is presented per se; according to the title’s documentation, you’re basically attempting to a break an ancient curse by finding five pieces of a magical amulet. Doing so simply involves moving between specific, if mostly standard, destinations – e.g. temples, caves, ruins, etc. – by proceeding across this backdrop one level at a time.

Stages consist of a grid of tiles laid out in varying patterns, with each square containing a particular item including colored gemstones, clay tablets and primitive carvings. By clicking on one tile, and then another, it’s possible to make selected targets switch places, so long as doing so ultimately causes three or more similar items to stand adjacent to one another. (If not, tiles and objects revert back to their original position; if so, tiles/objects involved in the match disappear from the board, allowing higher-situated items to tumble downward and fill in their place.)

What’s more, each time you make a match, tiles utilized within it lose their gold-colored highlighting. To win each stage, simply remove this shading from all tiles before time runs out. Complete any given scenario and you’ll proceed directly onward to the next. Run out of time beforehand and you’re given an interesting choice: Trade one of three lives to refill the timer, or replay the level from scratch.

As expected, the bigger the matches made, the greater the possibility you have of creating huge combos. Match four or more items at once, and you’ll also generate power-ups like stones which pair with any two other objects of the same type or explosive tiles that detonate, destroying multiple squares in a single swoop. The faster you remove objects from the board, the quicker you’ll fill the trident gauge as well, which, when maxed out, can be used to destroy any single item with a bolt of lightning. (Although, in a disappointing design choice that defies genre standards, the trident won’t remove the shading from targeted tiles, meaning you must be extra-clever when wielding it.)

An "ace timer," or optional secondary time goal that only experts (or, as we discovered, those possessing superhuman mental abilities) will be able to beat, is also offered. Finish under its harrowing constraints five times and you’ll enter the mystic golden age.

Of course, chances are you’ll never get around to seeing it, let alone completing the title – this one’s extra-difficult, even from a veteran’s perspective.

For example – there’s no undo function. Wild-card stones tumble downward instead of taking the place of other objects when invoked, possibly disappearing and/or complicating matters before you even have a chance to acknowledge them.

Locks constantly and randomly pop-up, freezing tiles and objects within, making them impossible to swap until they’re utilized in a match. (Even appearing on narrow corners or end-pieces, where they’re actually impossible to remove without using the trident.) Sticky tiles further compound aggravation too, sealing off entire sections of the board until the right randomly-generated tile finally appears to save your skin.

And then there’s my personal favorite gaffe: If a level’s split into multiple sections, say, in a capital "I" shape, squares from above won’t always fall downward into unoccupied sections below. Meaning that sometimes, bottom rungs are filled with randomly generated tiles instead, making strategic plotting virtually worthless.

It’s a shame, giving the game’s catchy audio library and decent looks, even if there’s little graphical or conceptual variation presented throughout. For now though, hey… A quick peek is still welcome for anyone with a general interest in the geographical area.

The Wonderful Wizard of Oz Review