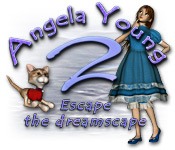 Angela Young 2: Escape the Dreamscape follows a pattern of story-telling that can only be described as heavily influenced by Alice in Wonderland. Angela finds herself lost in the Dreamscape. Having lost her cat, Felix, along the way, Angela must find her way back out and recover Felix before the Lord of Nightmares complicates matters even further.

Angela takes the liberty of filling you in on what’s been happening as the game starts. After falling asleep while reading a mystery story, Angela finds that she and her cat Felix have been transported to a strange forest. Along the way, Angela and Felix are separated, and Angela meets the Keeper of Dreams, who says he can help her and points her in the right direction. At least, that’s how it would appear the story begins. Unfortunately, the story is rather randomized and vague, leaving you guessing or saying "what?" more than half the time, or wondering who in the world you were just talking with.

Angela Young 2 is a hidden object game, and as such revolves primarily around finding and recovering various hidden objects. The levels themselves are decently varied, boasting a number of unique and fantasy-inspired locations. There are also exactly one dozen available puzzles to spice up your quest, ranging from matches-puzzles to matching games. Upon completing a level, it can be accessed for replay in a unique "Episodes" area available in the Main Menu. From the Main Menu, the Story introduction can also be reaccessed as well as Options, which allow you to adjust sound and music volume. Sound and music volume can also be adjusted from individual level screens. Your game will be automatically saved upon completing a level.

Unfortunately, Angela Young 2 is a false idol. "What’s going on? Who am I talking to? Who’s talking? What happened to the Keeper of Dreams and the Lord of Nightmares?" are all questions you’ll be asking yourself during and after you play the game, and not in a good way. While the story of Alice in Wonderland is twisted and amusing, Angela Young 2: Escape the Dreamscape is just plain confusing. The story is so loosely tied it’s difficult to know what or why something is happening, let alone who you’re talking to. This also goes for many levels which appear very illogical, such as the Lord of Nightmares’ safe actually appearing to be a bathroom. There seldom appears to be any logical reason for Angela to be recovering or finding hidden objects, either.

The game itself has little to no replay ability: only about 75% of the levels have any object variation, and even so the only difference is one single object. For example, there are 16 possible objects to find, but the game will assign 15 per level, leaving only one change or difference per replay.

The game does feature a nice soundtrack though, which will really immerse you in the "Dreamscape" experience, and despite the game being on the short side, each of the locations, if repeated at all, only show up twice and are fairly unique. The environments as a whole also give off a bit of a distorted vibe suiting the game.

But sadly, none of this can overcome the fact that Angela Young 2 barely scratches the surface of being a quality hidden object game when at least half the objects you’re supposed to find are sitting right out in the open. Add awkward English and storytelling to the mix, and you’ve got a game that’s not necessarily worth buying. Angela Young 2: Escape the Dreamscape had a lot of potential and room to work with its "Wonderland" feel and the chance of pulling in many enthusiastic gamers, but unfortunately, you’ll be more likely trying to "ESC" the Dreamscape.