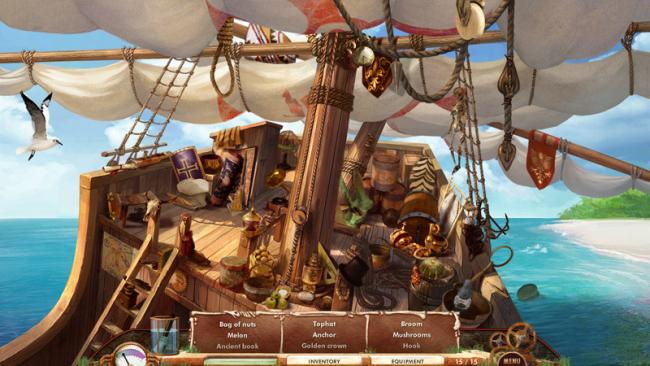 In fourteen hundred ninety-two, Columbus sailed the ocean blue. After that there were a few more journeys, some political intrigue, a stint in the dungeon and, in 1506, his death at age 54 in the Spanish city of Villadolid. But things didn’t go quite so smoothly in Ancient Spirits: Columbus’ Legacy. Set in 1953, this new hidden object game puts you in the hiking boots of Virginia Carter, a research assistant accompanying famed archaeologist Professor McNara as he tried to unravel once and for all the secrets of Christopher Columbus’ lost, cursed flagship.

It turns out that finding the ship is no great trick, as the intrepid duo have it tracked down half-way through the game’s opening montage. But the professor is overcome with excitement by the discovery and, heedless of Virginia’s cautions about the three other noted archaeologists who have disappeared without a trace while questing for the vessel, rushes aboard, where he meets the same sad fate that awaits all grey-haired, scholarly mentor characters in hidden object games. Our heroine first tries to flee the grisly scene but before long her fear is replaced by a determination to solve the professor’s murder and carry on with his work.

Columbus’ Legacy is a fairly straightforward hidden object game with a loose, fast-paced story, plenty of scenes to explore and the occasional puzzle to solve. The game forgoes photo-realistic graphics for a more cartoonish, hand-drawn look, and although items can sometimes be a bit blocky and indistinct as a result, the levels are generally open and uncluttered enough that it’s not a problem. In fact, the whole thing tends to stick to the easy side of the hidden object difficulty scale; it’s not a complete walk in the park, but it’s not too likely to stump anyone for very long either.

It’s still a fairly beefy game, however, clocking in at a little under three hours in length. The object searches also offer a little more variety than you’ll see in many other games, with some scenes using conventional written descriptions for items while others opt for silhouetted images. Many found items will end up in your backpack for use later, individually or in combinations, such as a shovel for digging holes or a rope and pulley for opening a trap door.

Columbus’ Legacy eases new players into the action with a very thorough, easy-to-follow tutorial, and provides a “Task” button that brings up an instant reminder of the current task at hand. Simplifying things even further, the game in normal mode marks important areas and appropriate exits with sparkles so it’s just about impossible to find yourself stuck without knowing what to do or where to go. (In expert mode, as usual, the sparkle effect is disabled.) There aren’t many puzzles and, aside from one rather nasty math riddle, they’re all fairly simple, but in a pleasant turn of events I also found myself having fun with them. The standard skip option is available but at no point did I find myself either needing or wanting to use it. 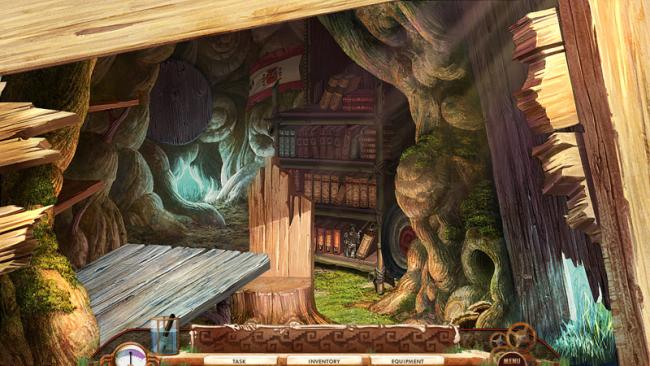 The most unusual twist to the game is the ability to play in either regular or “scrolling” display modes. Regular display mode is, well, regular, while scrolling mode divides hidden objects scenes into distinct, overlapping foreground and background layers and widens them so you’ll have to scroll left and right with the mouse or arrow keys to see the entire screen. It turns out to have a fairly significant impact on gameplay: Objects brought to the foreground tend to be considerably larger and easier to pick out, while those in the background can end up covered and only visible when the screen is moved one way or the other. It’s an interesting effect and while I ultimately settled on playing the game in regular mode, with the ability to switch on the fly you can bounce back and forth whenever you want for the best of both worlds.

Some players may be put off a bit by the fact that Columbus’ Legacy has no in-game journal or diary to record the narrative as it unfolds, which has no real impact on gameplay but can be frustrating for those who like to have some idea about what’s actually going on. Likewise, there’s no music to speak of, just ambient background audio, although how you feel about that will depend entirely on your opinion of videogame music in general. The only other complaint is that the whole thing tends to be fairly generic; bells and whistles aside, this is a very standard hidden object game.

Nonetheless, Ancient Spirits: Columbus’ Legacy is a good choice for anyone new to the hidden object genre or who’s just out for a casual experience in which relaxing gameplay takes precedence over solving big mysteries and saving the world. It’s like a big bag of salty chips: It’s not the best meal you’ll ever have and you’ll probably forget about it fairly quickly, but it’s tasty to munch on and fun while it lasts.