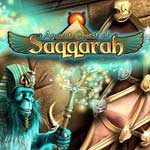 You’ve got to love acclaimed casual game developer Codeminion’s commitment to innovation and quality. Whether exploring new ways to play connect the dots (Magic Match) or turning the marble-blasting genre on its head (StoneLoops of Jurassica!), the studio always makes a point of doing something eye-catching with each release. Be thankful then nothing’s changed in latest offering Ancient Quest of Saqqarah.

This flagship outing – an Egyptian-themed puzzler blessed with stunning visuals and varied play styles – blows the doors off previous debuts, raising the bar for the entire genre in the process.

The first thing you’ll be struck by is the title’s riveting presentation, which uses convincing voice-overs, slick cinematic sequences and dazzling smoke, flame and electrical effects to instantly entertain and captivate. Per the featured tale, expertly narrated by magical blue talking monkey Khufu (who also guides you through your travels), once every thousand years an eclipse covers the ancient pyramid of Saqqarah, beneath which evil god Seth lies imprisoned.

But with the wicked deity’s bonds weakening in recent times, it’s up to you to visit the secret oasis wherein he lies buried beneath the sands and reinforce the wards. How to do so? Easy – by visiting the secret temples of the seven benevolent deities who cast him into exile (i.e. Isis, Anubis and Horus), each of which contains a new, talking immortal for you to meet, and fresh play style to master.

Indeed, you heard right – this isn’t so much a single, well-crafted puzzler as it is a mix of seven stalwart, individual game types, brilliantly blended together over a whopping 500 scenarios. For example, at one point you’ll find yourself swapping adjacent colored gems to make groups of three or more similarly-shaded tokens, thereby lighting up connecting pathways to complete each stage. Later challenges might instead involve exchanging two pieces anywhere on the game board, clicking and dragging connected lines of stones, or rotating sets of gems to accomplish similar feats.

What’s amazing isn’t just how much mileage the game gets merely by assembling stages from curved as well as linear pathways, or offering several spins on a simple twist. It’s also how well everything comes together, from hieroglyphic-spotting bonus stages that let you grab magic points exchangeable for the option to skip certain levels to the ever-present ability to unlock new powers and spells.

You see, there’s a huge wealth of bonus options available, from earnable ranks to keys that let you skip a temple ahead, even if you haven’t completed the current venue’s full range of vignettes. (Thankfully, using a gorgeously-rendered campaign map, one can always return later.) Think gems which gain explosive power every few moves, letting you light up additional links and remove obstacles and token-blocking barriers with greater ease. Don’t forget magical incantations accessible by making larger matches which cause stones to fall and shatter either, with a scarab taking them to Khufu afterwards, who’ll employ his mystic powers to aid you by shooting out lightning bolts and fireballs. There’s even an option to gain wildcard tiles that’ll match with any color token, provided you connect several gems in sequence.

Minor concerns aside (curving pathways sometimes make it tricky to see when you can create matches, each stage ends with a mandatory canned score-tallying animation, etc.), it’s hard to find fault with the overall package. Quite frankly, the level of audiovisual performance, play variation and general game balancing on display is absolutely staggering, right down to spoken instructions, well-timed hints and scaleable difficulty levels that effortlessly ease aggravation and instantly boost general replay value. Mind you, that’s before we even consider optional downloadable packs users can import that offer more stages, dazzling soundtrack tunes and oodles of extras to explore.

Frankly, from start to finish, it’s hard to discount the tremendous level of playtesting and polish that’s gone into the adventure. As such, Ancient Quest of Saqqarah doesn’t just stand up there with the medium’s best desktop time killers – in many ways, it’ll also change the way you look at them going forward. Whereas most mainstream-friendly amusements attempt to do one thing well, this landmark game instead delivers multiple thrills in a single, attention-grabbing package. Download today and see for yourself: It’s the type of title you’ll easily be playing weeks hence, and, at least for the next several months, using as a benchmark against which to score all future competition.