Home / Reviews / Among the Sleep Review: The Terrible Twos

Among the Sleep Review: The Terrible Twos 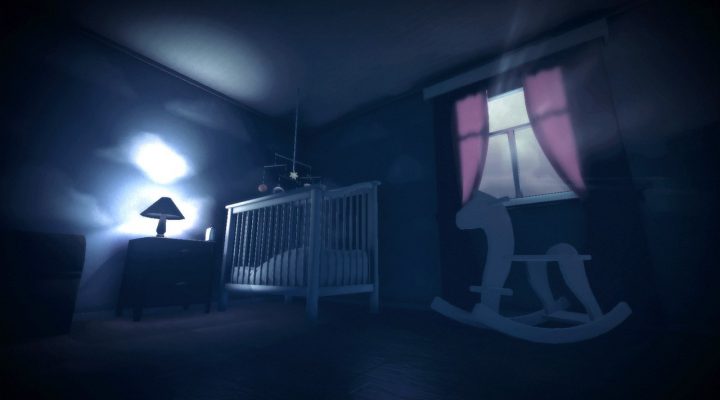 Some serious Amnesia-style scares and a bold premise with a suitable payoff.

The story underpinning the game could really use more exploration before it wraps up.

Among the Sleep is an oddly-named game with an even odder premise: a first-person horror game in the vein of the Amnesia series, but played from the perspective of a two-year-old child. That imposes some interesting limitations on movement and view, but it also allows the game to go to some unexpected and very strange places that clearly aren’t real, but might seem to be in the mind of a toddler.

“A child shouldn’t have to go through this,” your ursine companion states, as you sink ever deeper into the nightmare world in which you awoke on one particularly bad evening. The bear, Teddy, is stuffed and kind of creepy looking, but he’s also a source of comfort and even wisdom at certain moments, prodding you to forge ahead even as he urges caution. He also has some practical value, too, casting a warm glow of light when hugged – a perfect flashlight for frightened children.

The game opens with the happy pleasantries of your second birthday, celebrated with your doting mother, who gives you Teddy as a gift before putting you to sleep. But you arise shortly thereafter to trouble. The house is dark and your mother is gone, and you, being a more intrepid two-year-old than most (and in possession of a self-aware teddy bear), decide to seek her out. But it’s not easy being two. You can hide in closets or behind furniture, but actually getting on that same furniture can be a real hassle. You don’t walk particularly well, and while running is quicker, it’s also a lot harder, and sooner or later you’re going to trip and fall. You can crawl, which is actually faster than walking, but you can’t climb when you’re crawling, nor can you hug Teddy – and no hugs means no light.

The early stages of Among the Sleep take place in your family home, a charmingly normal place but for the crayon drawings scattered here and there, presumably made by you, that hint at something more sinister hidden underneath. But before long, you’ll be whisked away to an entirely different place, a twisted, echoing fantasy realm that you must explore in order to recover memories of your mother, which, so Teddy tells you, will ultimately lead you to her.

This is where things start to go a little sideways. This world beyond your own is lovely to look at but almost entirely non-interactive and linear. It’s generous to call your travels “exploration” because there’s really no exploring to do. Instead, you simply follow a clear and preset path, with little in the way of variation beyond the occasional opportunity to poke your head into a dark corner or short dead-end hallway. Puzzles are similarly simplistic and effectively impossible to fail, and aside from pulling drawers or sliding chairs in order to climb onto higher objects like kitchen counters, which barely deserves to be called puzzle-solving at all, they’re very few and far between.

There are a handful of minor bugs, and one big one involving a sliding platform that did not slide (but bounced me high in the air when I walked on it; it took me awhile to determine it wasn’t intentional) that kept me from making progress until I reloaded the previous checkpoint. Less annoying but more common was the difficulty I occasionally had climbing onto objects, and during one flight from a monster it became “stuck” on a door leading into a small closet in which I was hiding. It wouldn’t go away – I assume it could see me and thus refused to give up trying to reach me – and I couldn’t escape without running directly into its path and thus my own demise. After several minutes of hoping he’d get bored and move on, I made a run for it and was immediately caught, bringing my journey to a noisy (but, for the record, bloodless and visually non-violent) end – until I regained consciousness at the previous checkpoint.

Among the Sleep does bring the scares, and there were moments when I found myself very seriously wishing that I was playing something else. But it does so in a very slow, almost disinterested fashion. The ambiance is powerfully creepy, but the monster – which is to say, the thing you need to avoid, run away from and hide, hide,hide – doesn’t show up until roughly the halfway point, and is used sparingly for the remainder of the game. It’s an unexpectedly light touch for a “horror adventure” and it helps ensure the encounters remain fresh and frightening, bolstered by the very effective use of ambient audio. But it also rather quickly devolves into a very conventional horror design, with distinct levels and even recycled transitions through a central hub area that makes it all feel overly artificial. I had hoped for a unique “night in the life of a child” experience, but what I got instead was a series of fetch quests with no meaningful perspective shift; the only indication that I wasn’t a dwarf rather than just a few months removed from infancy was that I couldn’t run very far without falling on my face.

The story itself was also a bit of a letdown. I can’t say much about it without risking spoilers, and Among the Sleep really is a game you’re better off figuring out for yourself. But the imagery is so heavy-handed that I had a well-formed theory about what was going on long before the game ended, and it turned out that I was pretty much dead-on. The conclusion was more disturbing than satisfying, but I did find it satisfactory, even as I wished for something more to take it beyond that final moment – something, I suppose, to tell me that everything is going to be alright.

I think that’s a better reflection of Among the Sleep‘s horror than hiding in a corner, hoping not to be noticed by a hulking, shambling beast. Much like a small child, the game feels tentatively experimental, hesitantly grasping for new things and then running back to the comfort of mother’s arms, tripping and stumbling along the way. A child shouldn’t have to go through this, and yet there it is; and if the developer wasn’t able to pull the experience together as effectively as it might have, it still deserves credit for having the boldness to try, and to not shy away from the unavoidable outcomes of its creation.

TwoDots Review: Brother, can you spare a dot?