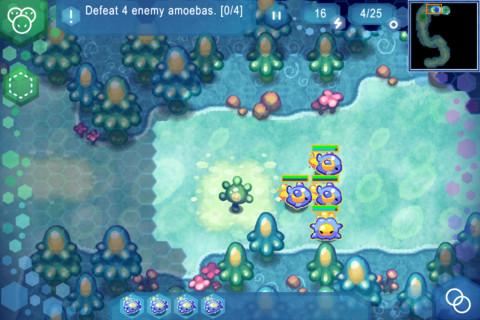 One of the drawbacks of games on touch screen devices is they are often extremely simple. As such, a real-time strategy title – where you’ll manage many units at the same time – is often out of the question. RTS purists might insist that the games play best with a mouse and keyboard and shouldn’t be shrunk down. But Grab Games couldn’t have made their RTS Amoebattle any smaller – it’s about amoebas. And you know what? It works.

Opening up Amoebattle reveals a very simple set of choices: Start a campaign or tinker with the options. This is a theme that carries throughout the game, and it works in its favor. The guys at Grab Games know what works and they stick with it.

Firing up a campaign will put you in charge of a single unit as a friendly robot named AMI, who may be Wall-E’s long lost cousin, walks you through how to play. The game slowly introduces new elements, from controlling your own units to attacking enemies, while introducing you to the landscape. AMI will familiarize the player with everything before launching them into a microscopic world.

Once you’ve defeated your first wave of enemies and replenished one of the meters you’ll have to monitor, the food points (what most of us would call hunger), you’ll be able to gain another unit. This isn’t completed in the way most RTS’s would accomplish the goal; there is no purchasing units. Instead, you’ll do what any right-minded amoeba in need of some company would do: duplicate. With proper nourishment, you’ll be able to expand your squad from a single cell fighter to a team of up to 25 tiny troops. Luckily, controlling the squad is easy no matter how big – or as big as a group of cells can get.

Where many might think a touch screen would make managing an RTS difficult, Amoebattle makes it work to its advantage. Featuring intuitive controls that utilize the touch screen with swipes and line drawings, handling troop management and battles is simple. You can select every unit on screen or just specific ones by circling who you want, and direct them with a simple swipe to a different part of the screen. Other controls, including options for replication and some group management, lay on the outer edges of the screen, never too far but in no way obstructing. While this may seem to some like it’s “watering down” controls, this is much more of a step in the direction of universal approachability than it is toward isolating to RTS fans. It’s just as great for fans of the genre as it is for newcomers that have never tackled tactical unit management games before.

Regardless of the skill level of the player, this game will eventually present a challenge. The campaign holds a full 8-10 hours of gameplay, and much of that will come with the final few missions. This game gets HARD. After spending the first half of the game easing you into the gameplay and explaining how to control your amoeba army, Amoebattle then decides to kick up the fight. The infection that you’ll be trying to kick out of the body before it spreads too far starts fighting back, and you’ll need everything that AMI taught you to keep the virus at bay (side note: AMI can be kind of frightening. He seems really cool at first, until his eyes turn red and he tells you to murder the enemy. I’m not sure if I listened to him to advance the game, or because I feared what he’d do to me if I didn’t). 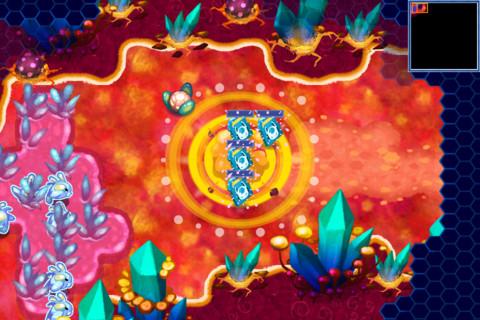 The campaign is a significant length for a pocket-sized game, but it never feels too repetitive or boring. Amoebattle is never stretched out just for the sake of making it last, and even if it had been, it wouldn’t be that bad. The game creates very unique worlds that all feature stunning visuals. The graphics for the environments as well as characters are gorgeously done, especially when played on the new iPad’s Retina display. It makes full use of every pixel the screen has available.

As hard as it may be to believe that an RTS can work with touch controls, it’s 100% true. Amoebattle does pretty much everything right. The only complaint that I can possibly muster about the game is that there is only a campaign mode. The team at Grab Games have promised a skirmish mode in the future if the game garners enough interest, and it definitely deserves attention. This is a true gem of a title that earns every part of the price tag attached to it and then some. It’s a microscopic experience that deserves some time under the lens of your attention.