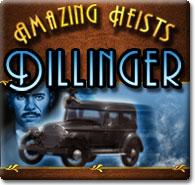 There are plenty of hidden object games that ask you to help solve crimes, but Amazing Heists – Dillinger asks you to commit one. Several, actually. You’ll tag along with the infamous Depression-era bank robber John Dillinger as he and his crew do what they do best, but you’d better keep your eyes peeled. The Feds are hot on Dillinger’s trail, and if John and the boys get pinched, they won’t be seeing daylight for a very, very long time.

The levels of Amazing Heists are represented by the different banks that Dillinger and his compatriots rob. Each bank follows the same basic approach: Casing the Joint, Block the Egress, The Robbery, and Breaking the Bank. Casing the Joint and The Robbery are both hidden object sequences that provide a list of items to find stashed around the location.

Amongst the ordinary objects you’ll find one listed in green that describes an object without flat-out telling you what it is. Sometimes the description is straightforward, like "prickly" for a cactus, but other times it’s more whimsical -I had to chuckle when I realized that "sitting" referred to the duck in the window.  If you get stuck, you can use one of your three hints, but use them wisely because unlike most hidden object games, Amazing Heists doesn’t give you the opportunity to earn more.

Though the objects are usually fairly well concealed, it’s the things that aren’t on the list that you’ll enjoy finding the most. Hidden somewhere within each heist location are seven wanted posters, coins spelling out "Dillinger," vault icons, and good old American cash. The wanted posters, Dillinger coins, and money simply add to your bonus, but each bank icon you find adds ten seconds to the amount of time you’ll have to crack open the vault. You don’t have to find any of them to make progress in the game, but if you’re a completionist like me, you’ll enjoy the challenge of tracking down all the extras.

The mini-games of Block the Egress and Breaking the Bank are were Amazing Heists begins to lose some of its ample charm. You have to find five colored keys during each Robbery, then use them to open the vault in Breaking the Bank. Opening the vault door is simply a matter of figuring out what order to put the five keys in the five locks. It’s basic trial and error, and while it’s amusing enough once or twice, by the time you’ve gotten through a few banks, it’s a bit of a snooze. Maybe if more locks had been added as you went, or if there were a bigger penalty for guessing wrong than simply having to start over, it would’ve been more interesting, but as it is, it’s just dull.

Block the Egress, on the other hands, starts off dull and advances to truly annoying. The idea of the mini-game is that you have to prevent the bank patrons and employees from leaving by blocking the paths out of the bank. If a patron touches you, they turn around and head back, but if four make it past you, you lose and have to try again. You’re given a dummy robber that can stand in one place as a road block, and another one that can move from path to path as necessary.

In early, shorter levels, all you have to do is stand there and wait for time to expire as patrons move down the paths and bounce off you. In later levels, your dummy robber will eventually vanish, leaving you to cover all of the paths out of the bank by yourself, moving from opening to opening. It’s tedious, unfun, and, worst of all, unskippable. You can’t progress in the game until you clear the level, but the level is so unenjoyable you’ll dread having to retry it.

Amazing Heists -Dillinger has a lot going for it, but its mini-games can be a real drag. It’s a bit on the short side, too, but the hidden object levels are very satisfying. Ultimately the game is a bit like Dillinger himself: undeniably charming, but with more than a little risk involved.