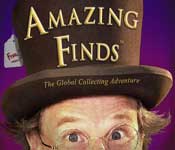 Like a good scavenger hunt? Amazing Finds is a hidden object treasure hunt that sends you around the world in search of all kinds of oddities.

The game begins when your “eccentric” Uncle Thaddeus McGriff summons you to his quirky mansion. For the past sixty years, he’s been tracking down rare and unique items for his peculiar collection. This collection of his is nearly complete, but there’s still eight items alluding him. He’s decided just can’t keep gallivanting around the globe like he used to do, so he’d like to hire an assistant, and he thinks you’re the perfect candidate for the job. His journal has all the information you’ll need to track down his treasures across the globe, taking you to eight interesting locations, including Portobello Road Market in London,Yoyogi in Tokyo, Hell’s Kitchen in New York, Anjuna Beach in Goa, Le Marche Aux Puces in Paris, Alameda Fair in San Francisco, Feria de San Telmo in Buenos Aires, and Marrakech in Morocco.

Like most hidden object games, in each location you’ll be given a list of objects to find. These generally fit within the scenes, though you’ll still find a couple of oddballs like tacos in India.

Occasionally an object will sparkle, indicating that it’s an inventory item. These are automatically stored to solve puzzles later.

In each scene, you’ll also be expected to find one of the eight special objects that McGriff is searching for, like a star sapphire, or a first addition copy of Alice in Wonderland. These objects are hidden in a secondary scene, which you can unlock by using an inventory item correctly. For example, you may have to bribe a parrot or monkey to leave an area, or open a locked trunk. Successfully revealing the new scene allows you to find more hidden objects and retrieve the special object.

To help you out as you search, Uncle McGriff has given you a magic coin. This coin is the hint system, and can be used as often as you like, provided it’s had a few seconds to recharge. When clicked, it will make one item on your list sparkle so you can find it more easily. Unfortunately, it’s not always obvious and can still be hard to see, so you may need to use it more than once to find the same object. You’ll get scolded for random clicking, but other than that there’s no real penalty, making the temptation awfully strong. These factors combined tend to make the game levels easy to beat without trying too hard.

In between each level is a minigame, which you must beat before advancing. These are pretty forgiving and generally simple. You can expect things like a matching memory game, a marble popper, a simple shooter, and a round of spot the difference. Once you’ve beaten a minigame, you can play it again as often as you’d like. Given the relative simplicity of most of the games, there’s not much incentive to do so, but the option is there if you choose.

If you like charismatic characters, Amazing Finds is full of them. The people in the game are all actual photographic images, complete with outlandish costumes and expressions, and even intentionally accented dialogue.

The graphics are pretty good, too. The hidden objects are blended in very well – perhaps too well. Some are nearly impossible to find without help. Each scene has it’s own music, which fits with the location. All of the soundtracks are fun and interesting, and they set up the mood nicely.

Despite being interesting, it’s fair to say that Amazing Finds is short, lasting no more than a couple hours. Once you’ve played, there isn’t much replay value either. Also, it’s just too easy to get stuck at the end, since you aren’t given a lot of guidance in solving the inventory based puzzles. When you consider these factors, Amazing Finds has difficulty comparing to more lengthy and detailed hidden object games like those in the Mystery Case Files, Hidden Expedition, or Dream Day series.

It would be nice to see a sequel that’s double or triple the length, with more scenes to explore and more challenging puzzles and minigames.  Hidden object fans will probably appreciate the trial of Amazing Finds, but might not be as “amazed” as promised.