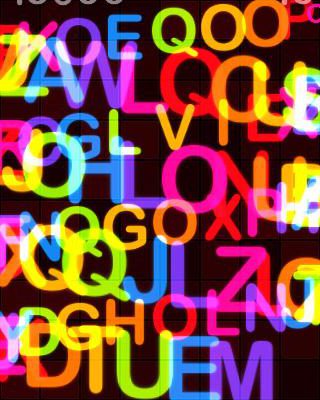 You went to school to learn things you never knew before, but Alphabetic wasn’t one of them. Don’t worry though, teacher’s gonna show you how to get an “A” in this excellent hidden object game. You’re in luck cause this game of A-B-C is as easy as 1-2-3, simple as do-re-mi. Come on, come on, come on let me show you what it’s all about!

Ok, all Jackson 5 references are out of the way… promise. Alphabetic presents itself as a game with a simple premise: find and tap out the letters of the alphabet in order. It starts off easy, with only a few different letters on the screen. But after you’ve tapped your way through A-B-C-D things start to get really interesting.

The game spirals, twirls and zooms letters around the screen in an explosion of color that would be beautiful to look at if you weren’t concentrating on tapping the next letter you need to find. With every letter you tap, the screen changes and organizes the letters in different patterns. Sometimes they fall from the heavens and bounce along the bottom of the screen. Sometimes they twirl upward as if on a spiral staircase. The colors are bright and beautiful and it really is something pretty to watch.

Of course you’re not here to watch, you’ve got the difficult task of finding each letter in the alphabet and doing it quickly. The game does a decent job of figuring out what letter you’re tapping on, especially in situations where multiple letters overlap as they slide and bounce around the screen. That being said, however, there were a few times that I tapped right on a letter and it didn’t seem to register. 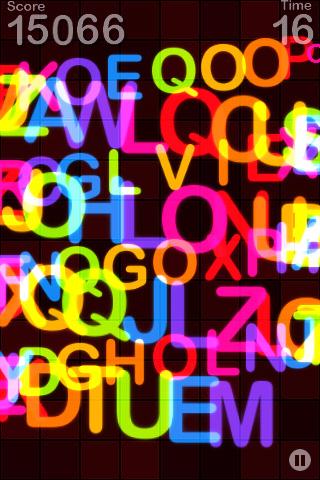 There are times when there are so many letters on screen at once that you almost need to unfocus your eyes to try and not see the individual letters, but merely shapes. There’s just to much going on to find the “G” so you just scan the screen for rounded letters (D, O, U, etc) to narrow the search. Oh, and there’s a constantly dwindling timer to keep you on the ball.

Outside of the standard game where you move from A-Z as fast as possible, there are also nine different “challenges” to give the game some pleasant replay value. These change the game up by ramping up the difficulty, making you tap out numbers instead of letters, having to find each letter twice, etc. They do a good job of mixing it up and personally I like playing the endless version where after Z you start back over at A again.

I don’t have any complaints about the game, only a short list of things I think they should’ve included. This game is screaming out for a simple uber-easy mode for kids just learning the alphabet, and would be a great way to help them learn. I’d also love to see some more variety in-game modes, maybe one that includes a few different fonts to increase the difficulty in other ways besides decreasing the allotted time.

While the challenges certainly add to the game, the fact remains that this game is always pretty much the same. The way they move the letters around is pretty and random, but after a few games you start to notice the same ones popping up. Alphabetic is a great diversion game however, and since it’s not made to play for an hour at a time the sameness of the game modes isn’t really all that stark. It’s meant to be played in 5-10 minute chunks and that’s where it excels.