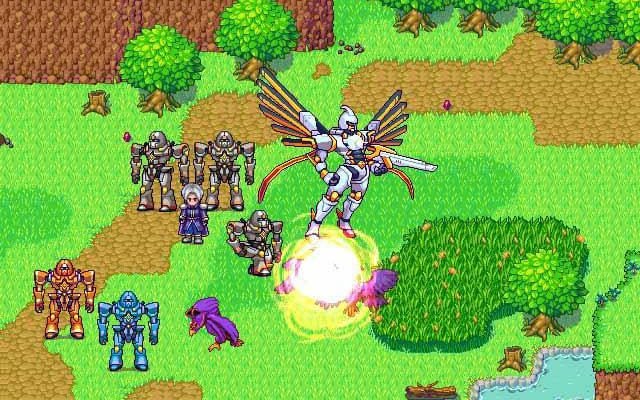 Alpha Kimori: Great Doubt is the first episode in what promises to be a intriguing and thought-provoking RPG trilogy. The gameplay is similar to casual role-playing games like the Aveyond and Millennium series’, but the storyline is heavier on science fiction and political ideals than fantasy.

The game opens 50 years after earth was invaded by aliens and all humans left for the planet Kimori. At the time of our story, the humans have divided into two warring factions. The Bidarians are warriors who wish to reclaim Earth, while the Jinrians wish to stay on Kimori and make it their home. The Bidarians are slowly destroying the planet though, using Robotic Intelligent Cybernetic Armor (RICA) to harvest Ki Crystals from the land and the animals of the land. They use the Ki Crystals to give themselves Ki Skills. 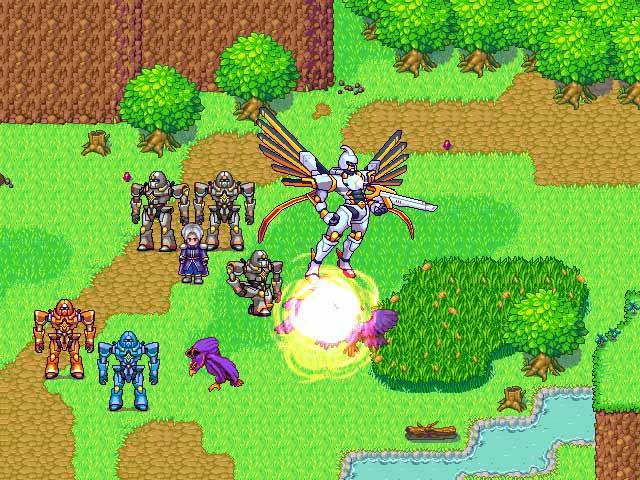 You play the role of Rick, a young Bidarian warrior. One day, while out fighting Ki Creatures, he is surprised by a beautiful girl with wings who begs him not to harm the creature. He doesn’t listen to her, but as time passes her words stay with him. By the time you join the story, he has begun to question if the Bidarian way of life is the right way.

The story in Alpha Kimori is very thought-provoking and involved. During your adventure you will be joined by Vanessa Avery, another Bidarian warrior and longtime friend (who wishes to be more) and the girl you met ages ago, a Jinrian princess named Yuki. You will be presented with both sides of the story and find that while each side has their argument in this war, neither side is without fault. The game does an excellent job of showing the moral struggle Rick is facing by going against his upbringing.

The game is a traditional 2D Japanese Anime RPG. The battle style is turn-based and simple to learn. Staying alive can be a challenge though. There is no option to flee the battle once you are in it, so you want to make sure you are prepared before entering. It is easy enough to avoid fighting though. Even the larger animals only take up one tile so if you are careful, you can walk around most of them. Unfortunately, doing this too often will leave completely unprepared for the last section of the game when you are suddenly bombarded by enemies. Even though Rick does not wish to kill the creatures of the land, you will find yourself having to do some necessary level grinding. 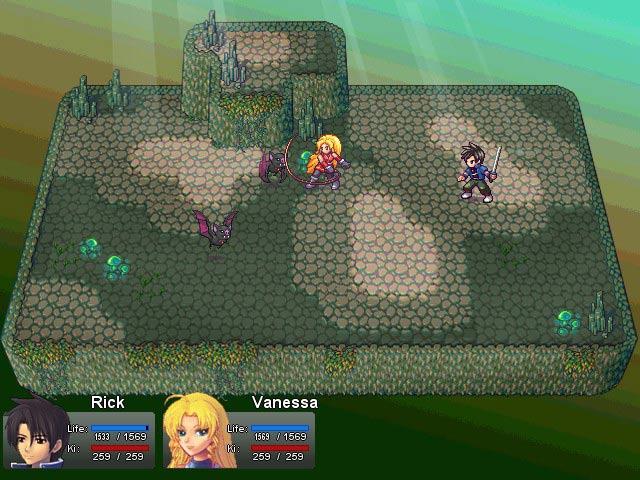 The main plotline is very linear. The story plays out like a novel more than an RPG. You will not be making choices for Rick, instead you will be watching the choices he makes unfold. While it would have been nice to make some of the decisions he is facing, the story is so involved that you don’t really notice. There are various side quests on your journey but you will only be able to complete them at certain times. Once you’ve moved forward in the main storyline, areas may be closed off to you for a while.

The maps in Alpha Kimori are beautiful and varied. You will be traveling through a technologically advanced town, a bright and cheery meadow, a tropical jungle and several other locations. There are several locations that you cannot access during the game, but it is likely they will open up in the next installments.

The one real problem I found with the game was lag. When there are numerous enemies on screen the game becomes a bit jerky, but the real problems show up in the boss battles. The bosses in the game can cast some elaborate spells, that take a long time to complete and for some reason the game slows to a crawl during these sequences. This wouldn’t be an issue, except the bosses cast these spells often. This is a minor annoyance in the grand scheme of things though.

Alpha Kimori is an excellent RPG for anyone who is a fan of the genre. It has about 5-7 hours of gameplay if you try to complete everything, which is a bit short for an RPG. However, it ends at exactly the right point, leaving the player anticipating the next game. I definitely recommend giving this one a try.