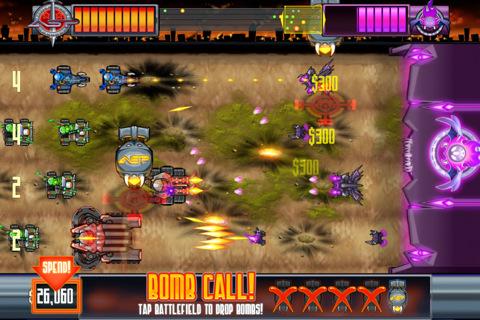 The story of Allied Star Police has managed to spread across the Web and warm a lot of hearts over the past few months. In case it’s managed to pass you by, here’s the Reader’s Digest version: nine-year-old Owain Weinert (who suffers from leukemia) was put in touch with PopCap Games via the Make-A-Wish Foundation because it was his dream to create a video game. As a result, PopCap had Owain work with one of its 4th & Battery teams. The end result was this gem of a title for iOS devices.

The story here goes something like this: an evil alien race known as the Flamions are invading every planet they can. As a result, the Allied Star Police have been called in to deal with the interplanetary threat the only way space cops can: with increasingly large firepower and explosions.

The game is a top-down castle defense/shooter. Each map has four different rows, which players and opponents have to send their forces down. Players have a series of increasingly powerful vehicles to choose from, as well as an extra ability and special attack to unlock. The buildable units are as follows: weak (but quick-to-build) ATVs, stronger sniper units, slower-yet-powerful tanks, and Wesvs (which are pretty much instant death in a can). Once players have selected a unit to build, they then have to select the row it will occupy. There’s also a temporary invincibility/speed boost and an ability to drop some devastating bombs around the map.

Gameplay is actually pretty simple, but that doesn’t mean things can’t get hairy. There are three different worlds of Allied Star Police to choose from, each one representing one third of the easy/medium/hard difficulty settings. Easy and medium aren’t all that tough to conquer, but hard is pretty difficult. There’s a ton of replay value here, since players are encourage to play through the game again in order to outdo their high scores. 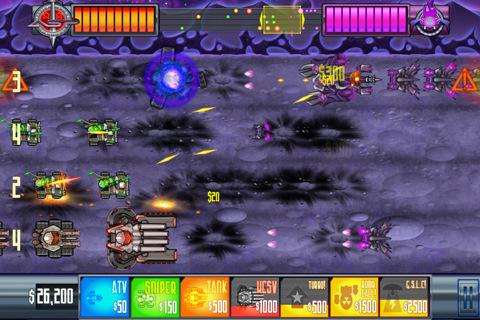 Aside from some charming gameplay, there are some pretty (inter)stellar production values here. The visuals fit the sci-fi setting really well, and they feature both great bright colors and details. The unit and environment designs are fun and seem like they’re straight out of a goofy/over-the-top SNES game. The music, meanwhile, is a particularly delightful series of MIDI rock music.

While Allied Star Police lasts, it’s a lot of crazy, fast, fun. Unfortunately, it’s not nearly as long as it could be, though there’s something to be said for a game that keeps players begging for more rather than giving them too much content to play through. But, more importantly, this is one of those games that will make anybody who plays it feel good. About people. And life. And just how sweet it can be when a kid actually gets to make a dream come true.