All the King’s Men Review 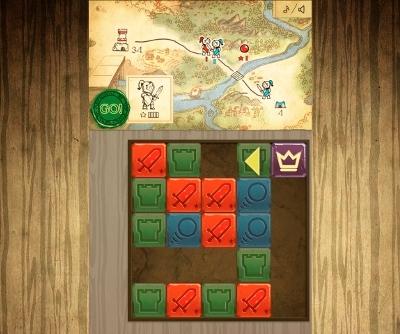 All the King’s Men has potential, but the concept needs honing.

All the King’s Men provides a pretty nifty grid-based mechanic that could potentially keep us satisfied well into the night. It’s all about knocking blocks off the side of the grid in order to conjure up battle units, which then appear on a battlefield at the top, and charge towards the enemy.

The problem is that the concept hasn’t been fully realized – in fact, it’s very much in its infancy. As it turns out, it’s actually a lot easier to beat the game by simply bashing all the keys, rather than sitting back and thinking tactically about what you’re doing.

You’re presented with a 5-by-5 grid, with a crown block surrounded by different-colored blocks. By shifting the crown block around, you’re looking to push same-colored blocks off the end in a combo, creating battle units that will then rush towards the enemy and hopefully take down their castle.

Above the grid is a 2D battlefield, a straight line from your castle to the enemy’s. While you’re firing off troops and cannonballs in their general direction, they’re also doing the same in a bid to destroy your castle. Fortunately, you can also collect materials for rebuilding your castle in the grid—and if you manage to 100 percent build up your castle, that’s a secondary method for winning.

It’s a pretty interesting mechanic that really makes you think. It takes a while to wrap your head around it, but once you do, you start to spot potential combos miles away, and set them up slowly but surely. Very satisfying stuff… for a while.

The problem is that, rather quickly, it becomes obvious that All the King’s Men hasn’t been designed very well. While the core gameplay mechanic looks like it’s onto a winner, this particular interpretation of it leaves a lot to be desired.

We started by thinking tactically about where we were moving, what combos we wanted to pick up, and in what order we wanted to fire them out. This worked well for the initial levels, where you’re against a single enemy and you can take your time to figure out the best possible movements. 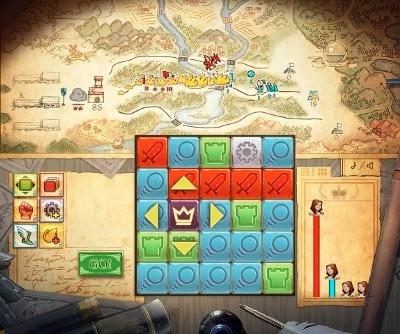 Then the game throws in multiple enemies at a time, and all hell breaks loose. With three castles to destroy all on different roads, such that you need to divide your resources up between three different areas, the difficult curve spikes rapidly. Suddenly stopping to think for a moment about your strategy goes out of the window. In one game in particular, we lost in just under 20 seconds.

What it comes down to is this—you can purchase special upgrades with real money that give you more powerful units, and make your units faster. It’s essentially a pay-to-win situation. Without paying money, you ain’t going to get very far.

Well, unless you realize that there’s a completely different tactic that works like a charm – hammer the keyboard. Rather than thinking tactically and trying to get the most powerful units, it’s better to simply keep slamming the crown block around, firing units out every second.

The game attempts to stop you from doing this by locking the game field for five seconds if you’re hitting keys at random too quickly. But if you don’t tap too quickly, then you can easily get around this. Using this rapid-fire “tactic,” we were able to beat any level very quickly, with high scores all around. 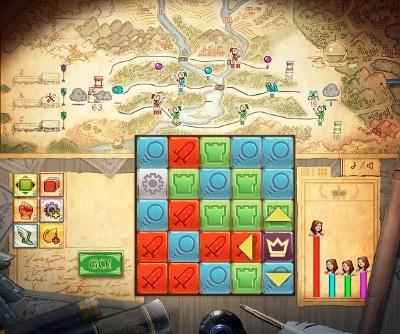 It feels like All the King’s Men needs a rather large revamp then. We can actually see the concept working better with a turn-based approach. That would stop the button-bashing tactic, and simultaneously allow us to sit back and think about our next move. As a real-time strategy, All the King’s Men simply doesn’t work.

Add to this numerous bugs, many of which forced us to reload the entire game, and one in particular that forgot our save data meaning we had to replay many levels all over again, and All the King’s Men shows signs of potential. Now it just needs a serious amount of honing to realize this.