Home / Reviews / All my Gods Review 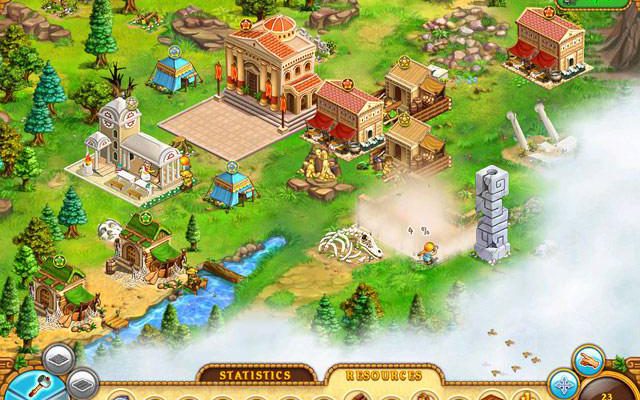 All My Gods strives for heavenly perfection, but definitely gets dragged down to Earth by some of its issues

Developer Realore’s claims that All My Gods is “a casual game like no other” are pretty much the biggest lie ever. There are dozens of other titles like this out there. It’s by no means a bad game, but there a number of quirks that bog the experience down and may make you want to think twice about purchasing it.

The plot here is based around the Roman pantheon of gods. You see, Saturn has decided to retire and his son is taking over. All of the gods — except for Mars — agree to help him out as he starts to build his own civilization. There’s a society to manage, fellow gods to appease, and (I’m not making this up) a UFO to study. For some inexplicable reason, Mars really doesn’t like the young godling, but this conflict provides a number of dramatic moments in the narrative. 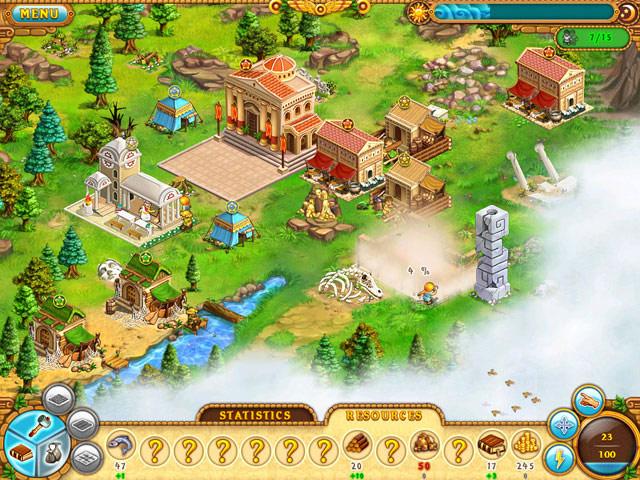 All My Gods is a fairly basic city-building sim that will feel instantly familiar to anyone who ever played titles like Sim City. You’re provided with an ongoing set of goals to accomplish as the game progresses, usually in the form of collecting certain resources, researching specific science type, or clearing out areas of territory to expand your civilization into. It’s all pretty standard stuff, but the technology progression trees are pretty solid, the controls are easy to learn, and the game is fun enough that it’ll keep you hooked for a few hours. However, it should be noted that the gameplay is incredibly slow and the hand-holding quest assignments start to get old after a while.

Aside from different types of food and building materials, your civilization accumulates mana that you use to perform miracles. This sounds way more impressive than it is, honestly. Miracles largely consist of you using a “god hand” tool to quickly harvest extra raw materials in exchange for mana. Miracles are useful when you need to snag extra resources within a certain amount of time, but there’s not really much of a point to them otherwise. 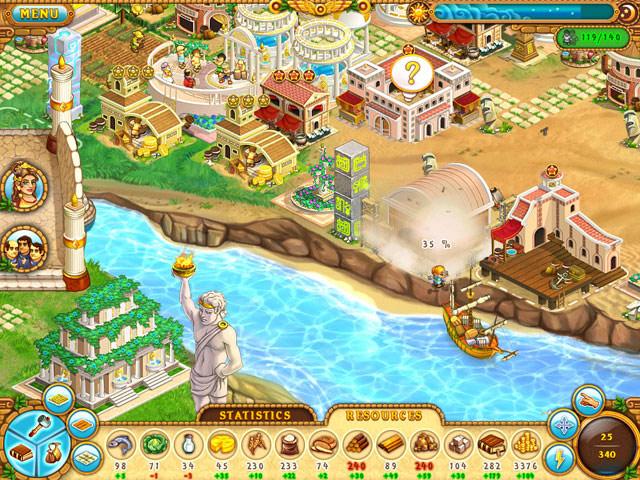 Performing miracles is actually one of the most surreal parts of the game. Every time you do something divine, nearby worshippers make a lot of comments to show their appreciation of your heavenly greatness. It’s just bizarre to know that you’re playing a Roman god and see statements like “Mana from Heaven!” and “Hosanna!” appear all over the place.

Instead of a top-down view like with so many other city-building games, you’re treated to an isometric perspective. However you’re stuck with only one angle, since the camera can’t seem to be rotated. This is really frustrating after a while, because it’s next to impossible to select plots of land that are behind your buildings. It’s too bad that the camera is so limited, because the game’s graphics are actually really lovely: Environments look hand-painted, while characters are all nicely designed and well-animated.

All My Gods is fine but — aside from some lovely graphics and some fun plot points— it doesn’t really stand out from the crowd of other sim games. It’s a little too slow and simple to really hold dedicated genre fans’ attention, but it does feel like this could be a really great title for younger gamers thanks to its easy-to-learn controls and minimal difficulty. If any of this sounds like it might be fun, check out the game’s demo, since it’ll let you play an hour for free.