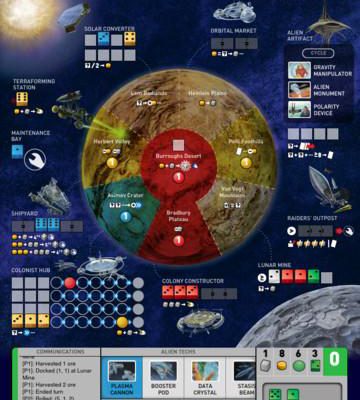 The original Alien Frontiers arrived in 2010 to considerable acclaim, off the back of the first successful Kickstarter project for a board game. Publisher Clever Mojo Games repeated the experiment for the iOS version and rapidly got their backing. Now the app is here, and gamers can judge for themselves whether it meets the standards set by its illustrious predecessor.

The rules of Alien Frontiers are simple. You have a pool of three dice representing a fleet of ships which you roll and then, depending on the value combinations of the results, you can assign them to slots on the board to do stuff. A dice on the solar converter will earn you half its value in fuel, while a dice assigned to the lunar mine must have a higher value than dice already there and will collect one ore. Once you’ve got some of these resources, your options grow. A pair of dice with the same value assigned to the shipyard, plus one fuel and one ore, will buy you another dice for your fleet. The ultimate goal is to use your dice and resources to launch colony counters onto the planet below, each one earning a victory point, while having more colonies than any of your opponents on each sector of the planet grants a special power. 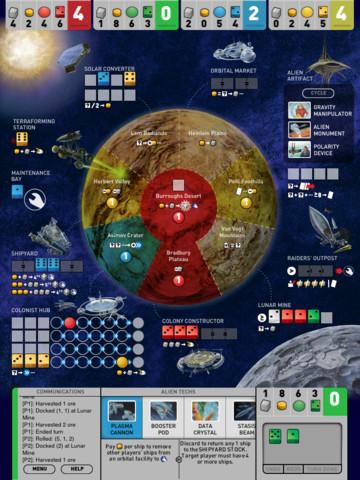 While the turn structure of rolling and assigning your dice is straightforward, the effects of the nine areas on the board and the eight planetary sectors are not. They’ll take several games to get to grips with. There’s some helpful iconography on the board to assist you, and you can call up a copy of the rules at any time during play — but those rules are all there is to help you learn the game. There’s no tutorial of any kind, so if you haven’t played the board game before, be prepared to wade through sixteen pages of rules before your first play.

Once learned, Alien Frontiers reveals its majesty. The design does a superb job of integrating a number of difficult bedfellows into a single game. Random dice rolls provide tension and excitement, but the large number of options provided by different combinations ensure that good strategic choice remains essential. Worker placement games like this can become staid from lack of player interaction but not Alien Frontiers. Here, clever dice assignment blocks opponents from using spaces they need, and you can also sometimes steal resources from them. There’s a selection of alien technology cards to buy with various effects which support this central balance. Some allow you to adjust your dice after rolling for more strategy, others permit greater interaction such as disintegrating enemy dice. The whole package is brilliantly balanced and should offer entertainment to a very diverse range of gaming tastes.

There are four levels of AI to play against, but after only a few games your skill will have improved to the point where you can beat the toughest setting most of the time. This is a perennial issue with iOS board game adaptations, and Alien Frontiers is far from the worst offender, but it’s still an unfortunate cap on the replay value of the game. Some apps ameliorate this problem by offering asynchronous play for easy participation in games against other humans, but that feature is absent here and sorely missed, although it’s planned for a future update. You can play against other people side by side in Hotseat mode, and the app does a sterling job here, and will serve as a cheap taster for the physical board game. 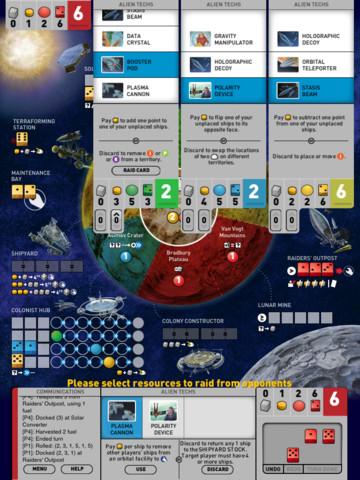 The reason for this is the excellent and intuitive interface. Everything you need is either on the screen or easily reachable through a single touch. There’s even room for a window detailing the play actions, so if one of the AI players surprises you with an unexpected move you can check the record and see how they managed it. The graphics are lifted straight from the retro sci-fi feel of the original and are engaging enough although there’s no animation beyond the dice rolls and no retina support. There’s a really neat eerie science-fiction soundtrack playing in the background that suits the theme perfectly and never seems to become tiresome but no other sound.

Alien Frontiers is a faithful and eminently playable conversion of an extremely well-designed board game. Aside from the lack of a tutorial you can’t fault the interface and the limitations in multimedia and AI are pretty much par for the course in this genre. But the lack of asynchronous play to extend its shelf life is a grave exclusion. For now I can only review and rate a game on what it currently offers, but if the promised asynchronous play is added, Alien Frontiers will be worth a whole star extra and become one of the very best board game conversions around