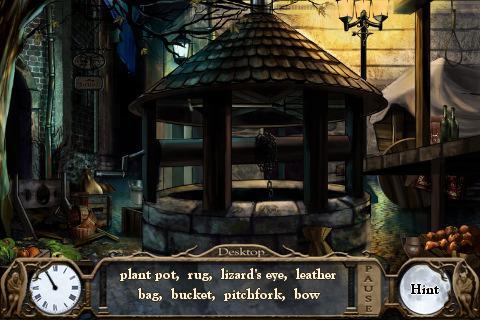 Alicia Darkstone is having a rough day. All she wanted to do was stop by and see her friend, but – wouldn’t you know it- it turns out he was abducted just before she showed up at his workshop. That means that what was supposed to be a nice, relaxing, evening has suddenly turned into a night filled with mystery, suspense, and gothic eeriness.

Alicia Darkstone: The Mysterious Abduction is a hidden object game, which means that gameplay consists of searching through environments for items on a written list. Given the supernatural setting the mystery you’re investigating, all of these items are appropriately spooky. If you can’t find all the objects on the list before time runs out you have to start over with a new list and new object placement.

You can zoom in quite a bit and search through sections of an area in greater detail. There’s also a hint system, which will highlight an object that can be picked up. This is all pretty standard stuff for anyone who’s used to these types of games. However, the craftsmanship involved with this title definitely makes it more enjoyable.

The gameplay itself is relatively well-done. Objects are often difficult to spot simply because they’ve been well-hidden, meaning that the levels tend to feel challenging instead of frustrating. With only 12 levels to search, completing the game won’t take experienced gamers terribly long, either. That said, players are likely to stay entertained the entire time.

One of the ways that this game really shines is the way it looks. The graphics all look hand-drawn, which is kind of refreshing compared to most other games of this type. What’s also nice to see is that the environments all look unique while still remaining relatively spooky. Objects are also well-placed, often blending in with their surroundings convincingly thanks to the texture and color combinations. There is, however, one small problem with these environments: the imagery will become fuzzy if you zoom all the way in. It’s not terrible, but it’s definitely noticeable. 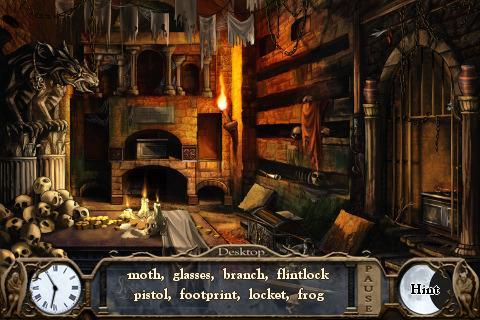 The character portraits, which appear every time dialogue is exchanged, are particularly good. These pictures look like they come straight out of a major comic book, and the designs are surprisingly original and creative. On top of great graphics, the music is both subtle and atmospheric. The game’s soundtrack managed to compliment each environment nicely and never grew dull.

As far as hidden object games on the iPhone go, this is one of the better examples out there. We’ve yet to see an iPhone game of this nature to be amazing, but Alicia Darkstone: The Mysterious Abduction certainly has enough going for it to be considered “pretty good.”

It should be noted that the free version of the game was reviewed, which would occasionally feature ad banners on the top of the screen. While these banners never actually made gameplay difficult, they did require a bit of effort to avoid when you drag your finger around the screen so you can scroll through a room. If nothing else, the ads are an annoyance, but they don’t cripple the gameplay. If you find that the ads are obstructing your view too much, a premium version with identical gameplay is available for 99 cents.

Artifacts of the Past: Ancient Mysteries Review